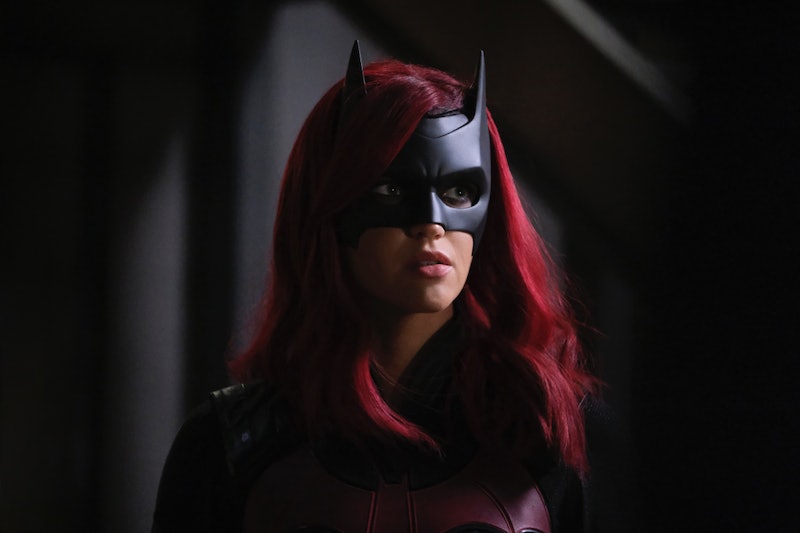 After being teased throughout Season 1, Batwoman villain Safiyah Sohail will finally arrive in Gotham in Season 2. She was only introduced to the DC universe a few years ago, but there are a few key details to know from her comics storyline; namely, that she has a complex relationship with former Batwoman Kate Kane.

Safiyah first appeared in the 2017 comic Batwoman: Rebirth #1. After Kate is expelled from the military, she winds up marooned on Coryana, a fictional pirate island near Malta full of shipwrecks and smugglers coves. She gets patched up by Safiyah, the ruler of the island who keeps peace with various warlords in exchange for them protecting it from outsiders. "I know everyone on this island. I know everything they do — and they all know what I am capable of," Safiyah tells Kate.

Despite knowing it's unwise to fall in love with an outsider, Safiyah gets attached to Kate, who she calls her "siren." It's a fitting pet name; Safiyah's associates see Kate as a dangerous colonizer, and she eventually ruins Coryana. Even though the two are happy together for a time, Kate's arrival unintentionally brings a deadly plague to the island. When an innocent man is blamed for the disease, Kate guiltily leaves Coryana. Safiyah is heartbroken.

In the wake of Kate's departure, Safiyah seemingly disappears and the Kali Corporation — the front for a terrorist organization called The Many Arms of Death — swoops in and sells off the island to investors. It's only later revealed that Safiyah is the leader of The Many Arms of Death. She kidnaps Kate's sister Beth and successfully reawakens Alice, her evil persona. This series of events puts Kate and Safiyah in contact again, but under far more antagonistic circumstances. Kate eventually defeats Safiyah with the help of Alfred Pennyworth's daughter, Julia.

This will likely play out differently in the CW show. Following Ruby Rose's exit from her role as Kate Kane, Javicia Leslie's Ryan Wilder has fully taken over as Batwoman. She never met Safiyah in the comics, as Ryan is a new addition to the DC Universe. While it's possible Safiyah's romance with Kate will be applied to Ryan instead, it sounds like Safiyah's storyline will mostly revolve around Alice. In Season 1, Alice was working for Safiyah, but their relationship turned sour after Alice interfered with a plot to assassinate Kate'. In response, Safiyah had Alice's Wonderland gang killed.

Batwoman Season 2 will delve more deeply into this complicated past."[Safiyah is] not what we expected from Season 1," actor Shivani Ghai, who plays Safiyah, told Entertainment Weekly of her character. "She does come across as someone who is quite charming and kind. She has a definite soft spot for Alice. You will learn as we go on that there's definitely a much deeper relationship there."

Showrunner Caroline Dries added that though "Alice is [normally] the strongest, most manipulative person in the room," she's deferential whenever Safiyah is around. "It's a new dynamic and it's very intriguing to watch."

More like this
The Black Lotus Staff Has "Had Enough" In The 'White Lotus' Spoof From 'SNL'
By Brad Witter
ITV’s New Take On 'Love Island' Is Only For MILFs & DILFs
By Sam Ramsden
The Plane Crash In 'Dear Edward' Is Based On A 2010 Tragedy
By Grace Wehniainen
'That '90s Show' Is Officially Coming Back For Season 2
By Gretchen Smail and Grace Wehniainen
Get Even More From Bustle — Sign Up For The Newsletter
From hair trends to relationship advice, our daily newsletter has everything you need to sound like a person who’s on TikTok, even if you aren’t.