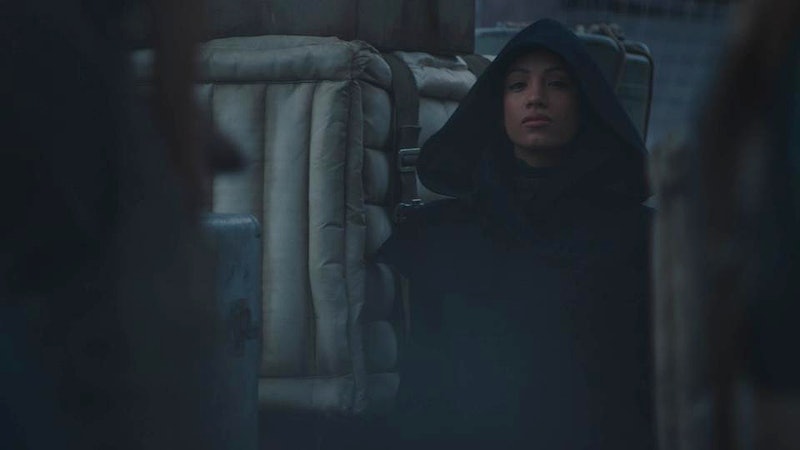 The Mandalorian is really upping its count of formidable female characters in Season 2. In addition to former MMA fighter Gina Carano's return as bounty hunter Cara Dune, there are a number of new faces rumored to be joining the cast including Rosario Dawson as the beloved-Jedi-turned-Rebel hero Ahsoka Tano, Katee Sackhoff as the Mandalorian warrior/leader Bo-Katan Kryze, and WWE wrestler Sasha Banks. It's unclear who exactly Banks will be playing, but fans have a few theories.

Banks Is Playing An Acolyte of the Beyond

One theory that could prove most dangerous for Mando and Baby Yoda is that Banks is portraying an "Acolyte of the Beyond." This is a group of zealots obsessed with the Dark Side of the Force and best known for obtaining Darth Vader's lightsaber with the intention of returning it to him... (spooky voice)... beyond the grave. The black robe-wearing Acolytes were introduced in the Aftermath trilogy of novels, which also introduced Timothy Olyphant's Cobb Vanth. And due to a Reddit theory that claims Vader's lightsaber appears in Season 2, some are theorizing that Banks — who appears in a black hooded robe in The Mandalorian Season 2 trailer — is one of these robe-loving Acolytes. If that's the case, she'll likely be pretty interested in another force-user, Baby Yoda, possibly even looking to convert him to the Dark Side.

Another theory that's gaining momentum is that Banks is playing Doctor Aphra, a swashbuckling archaeologist from Marvel's Star Wars comic books. Aphra stars in her own self-titled comic by Kieron Gillen, and she's quickly become a fan favorite thanks to her roguish and self-preserving nature. Aphra has a knack for teaming up with both heroes and villains, which could make her a wildcard if she crosses paths with Mando. Would she aid him in his quest? Or would she be a hindrance?

Maybe the most popular theory is that Banks is playing Sabine Wren, a Mandalorian from Star Wars: The Clone Wars who at one time possessed the Darksaber. The Darksaber will undoubtedly play a big role in Season 2, and we already know that another Darksaber-using Mandalorian leader, her pal Bo-Katan, will appear in the series. Including both characters would certainly be a big nod to Mandalorian history, but it's unclear if the show wants to get that deep into the Clone Wars weeds, as up to this point The Mandalorian has mostly been milking Original Trilogy nostalgia.