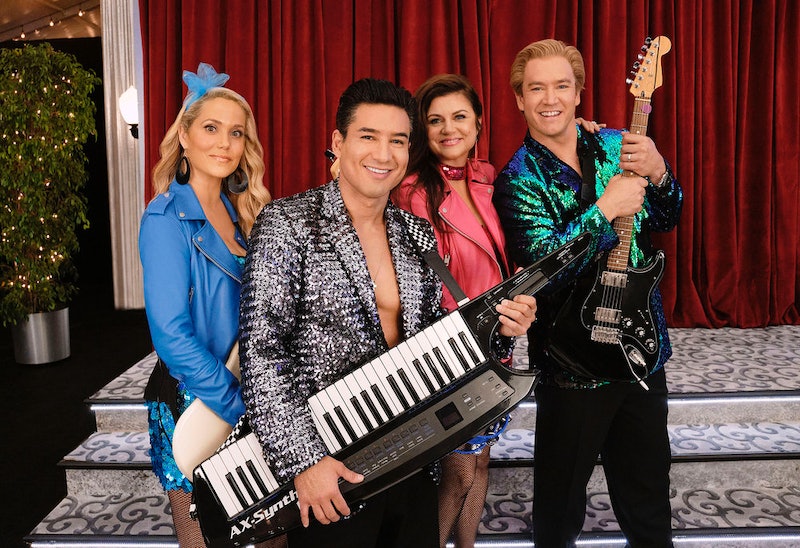 A new class may be roaming the halls of Bayside High in Peacock's Saved by the Bell reboot, but there are plenty of nods to the original '90s series. Zack Morris (Mark-Paul Gosselaar) is now California's governor while Kelly Kapowski (Tiffani Thiessen) is his First Lady, and A.C. Slater (Mario Lopez) and Jessie Spano (Elizabeth Berkley) have returned to Bayside full-time to guide the new generation that, of course, still hangs out at The Max. (Even Lark Voorhies' Lisa Turtle makes a brief FaceTime cameo from Paris, though Dustin Diamond's Screech doesn't appear in the show.)

"As a viewer, if I was tuning into a Saved by the Bell [revival], I’d be pretty bummed not to see any of the original cast, not get to know what’s going on with all of them now, and not see little inside jokes and Easter eggs," showrunner Tracey Wigfield told TVLine in November.

Even so, she stressed the importance of "spending enough time with this new cast and really investing in them" so that the 2020 version can "really stand on its own." "This could still be a comedy that anyone would want to watch," Wigfield added. "That was very important, and then we thought of the OG cast and the nostalgia as kind of the icing on top."

From familiar faces to iconic lines, here are all the ways the reboot pays homage to the original.

As if Zack and his son Mack Morris' (Mitchell Hoog) names weren't already similar enough, it turns out their nicknames are exactly the same. Soon after viewers meet Mack for the first time at Bayside, it's revealed that Lexi (Josie Totah) calls him "Preppy," just as Slater did to his dad throughout the original series.

Slater's pet name for Jessie is also referenced in the first episode — except now she's graduated to "Dr. Mama." Later on in the reboot, the jock turned Bayside gym teacher admits to using the moniker "every day a couple times a day back in high school."

The famous phrase Zack used to freeze frame a scene when he broke the fourth wall to address the '90s audience now belongs to Bayside transfer student, Daisy (Haskiri Velazquez).

After all these years, The Max's famous waiter Max (Ed Alonzo) is still performing his food-themed magic tricks for the newest crew of Bayside sophomores.

While Douglas High transfer DeVante (Dexter Darden) mulls over his extracurricular options, he learns that there's a special "resort sand" version of volleyball. Fans of the original series might remember the Malibu Sands Beach Resort episodes, where the Bayside gang worked a summer job and — you guessed it — played in a beach volleyball tournament.

Perhaps the most obvious anachronism is Daisy's oversized mobile phone, similar to the one Zack used in the '90s. The overachieving new student explains that her mother (Selenis Leyva) believes that smartphones are too expensive, and this way, she can't take any "nudie photos."

When Principal Toddman (John Michael Higgins) enters his office — which looks an awful lot like Principal Belding's — to find Mac kicking back, he looks every bit like his father's son.

During a conversation with DeVante, Slater turns his chair around exactly how he did in the OG series. "Did you just sit backwards in a chair?" DeVante asks him. "Wow, I've never seen anyone do that in real life."

In an easy-to-miss moment, Toddman asks a student if he really found an abandoned radio station in the school's basement. A Season 2 episode of the original show centered on Zack and Screech reviving Bayside's KKTY radio station, which went off the air long ago due to the antics of then-student Mr. Belding (aka The Big Bopper).

After Mack offers an overwhelmed Daisy a "safe, all-natural way to increase productivity," Jessie appears out of nowhere to slap the prescription bottle out of his hand and share her story from one of Saved by the Bell's most iconic scenes. "Not on my watch! Are those caffeine pills?," she says. "Daisy, you can't mess around with that stuff. Sure, those pills seem like an easy fix. At first, they're so exciting, and then it gets even more exciting. But after that it gets so scary. And in the end, you ruin your girl group's shot at a recording contract." Later, Jessie reveals she's almost 30 years caffeine-free.

The reboot's "Rent-A-Mom" episode cribs an almost exact plot line form SBTB's "Rent-A-Pop" installment, in which Zack hired an actor to impersonate his dad for a meeting with Mr. Belding in order to prevent him from finding out about his bad grades. In the new version, Mac and Lexi refer to the scheme as "The Giraffe's Gambit."

Complete with the same jukebox saxophone music and his "Hit it!" command, Slater hilariously re-creates the same dance he did at The Max in the original series.

Neon tanks? Check. Air broom? Check. Splits and slides? Check. Slater recruits DeVante, Mack, and Colt (DeShawn Cavanaugh) at Jamie's (Belmont Cameli) house party for the same Beach Boys performance he did with Zack and Screech. "Wait, what is that outfit? Is it from high school?" Jessie later asks Slater, who tells her he's been keeping it in the trunk of his car.

While digging up an old class time capsule in the homecoming episode, Zack, Kelly, Slater, and Jessie give a nod to the end-of-episode freeze frames that were famously included in the original series.

The gang gets the band back together to perform a snippet of "Friends Forever," their hit song from their famous rock band. Zack then realizes that Toddman is confused because Zack Attack was only famous in an episode-long dream.

While touring the updated Douglas High with DeVante, Toddman runs into a fellow administrator that he'd met at "Principal-Con 2010." The duo then does "the principal shake," reciting Mr. Belding's famous catchphrase: "Hey, hey, hey, hey… What is going on here?"

During a family dinner, Zack says, "New kids keep things fresh. Remember Tori?" to which a confused Kelly asks, "Who?" That's because new student Tori Scott appeared in only a handful of episodes in the original show, and that was after Thiessen and Berkley departed the series.

After Mack asks Kelly if he truly knows his father, she replies: "Of course. It's Zack. Why are you asking? You're not Jeff's." This, of course, is a reference to her boss at The Max, whom she briefly broke up with Zack to date in Season 3. (Bonus: During the same phone call, Kelly also mentions Zack's antics, including his "poison face cream," his unauthorized bathing suit calendar, and the time he "almost had Screech dissected by the government.")

More like this
Netflix Reveals First Look At Wednesday In The 'Addams Family' Spinoff Series
By Bustle Editors
A New 'And Just Like That' Table Read Pic Confirms A Key Character's Return
By Jack Irvin and Grace Wehniainen
24 Years Ago, 'Friends' Dropped Its Most Underrated Ross & Rachel Episode
By Grace Wehniainen
How To Stream 'Pretty Wild'
By Arya Roshanian
Get Even More From Bustle — Sign Up For The Newsletter