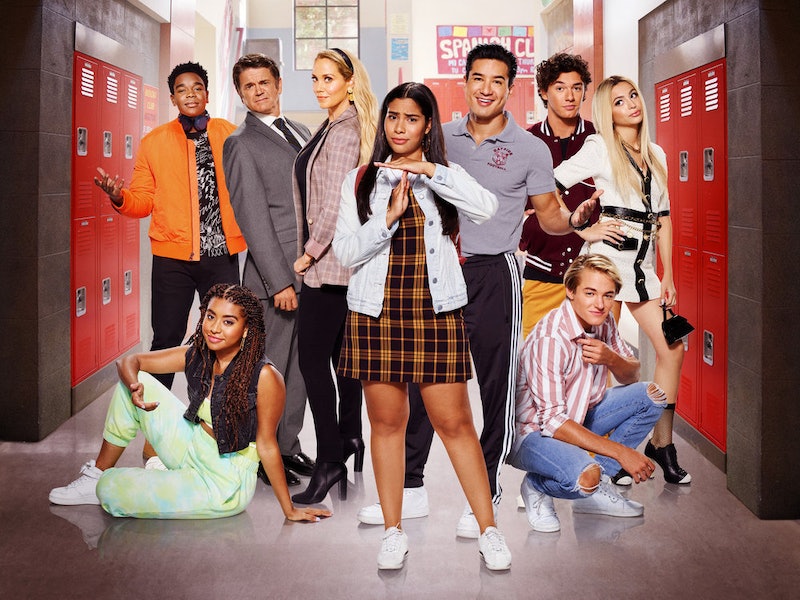 Zack Attack gets the band back together in Peacock's Saved by the Bell reboot with Jessie (Elizabeth Berkley Lauren) and Slater (Mario Lopez) starring, and Zack (Mark-Paul Gosselaar), Kelly (Tiffani Thiessen), Lisa (Lark Voorhies), and even Max (Ed Alonzo) making nostalgic cameos. (Sorry, there's no Screech this season.) There are plenty of newcomers in the Saved by the Bell cast, too, taking over the halls of Bayside High. And this new class is more diverse than the original.

In the new iteration, Zack Morris is now California's governor (with high school sweetheart Kelly Kapowski as his first lady, of course), and he's found himself in hot water after closing too many underfunded schools. Due to his budget cuts, the affected students are funneled into the state's most well-funded schools, including Bayside High. The new influx naturally gives Bayside's privileged student body a "much-needed dose of reality," as the series confronts classism, race, and gender identity issues head-on.

"There's heart at the core of everything still, which is something I think people loved about [the original series]," Berkley recently explained to Entertainment Tonight. "It can bridge both people that are nostalgic and a new generation."

Catch up with past favorites and get to know the new cast members below.

Berkley reprises the role of overachieving Bayside brain Jessie Spano, who, after that brief bout with caffeine pills, is now a doctor. ("Yo, mama. Sorry — Dr. Mama," Mario Lopez's A.C. Slater jokes in one scene.) Jessie is also mother to Jamie, Bayside's new football captain. Berkley, who's post-Saved by the Bell credits include Showgirls, New Girl, The L Word, and CSI: Miami, is also a producer on the Peacock series.

The Bayside Tigers' one-time star wrestler A.C Slater is now the high school's gym teacher, with Lopez returning to the role. This is the first series regular role for the actor since he appeared on CBS' The Bold and the Beautiful in 2006.

Hey, hey, hey, hey, what is going on here? Dennis Haskins' Mr. Belding has been succeeded by equally hapless Principal Toddman, played by Higgins, who's best know for his roles in Best in Show, A Mighty Wind, and Pitch Perfect.

Cameli fills Slater's jock role as Jessie's son Jamie, Bayside's newest football captain, who's comedically in touch with his sensitive side. (Expect plenty of competition between him and Zack Morris' son, Mac, too.) The actor has appeared in Empire and the 2019 Lifetime movie My Evil Stepdad.

Darden's DeVante is a troubled loner, who attempts to reinvent his bad reputation after transferring to Bayside. The actor previously appeared in the Maze Runner trilogy, as well as Hulu's The Binge.

Privileged Baysider Mac Morris' name isn't the only similarity to his governor dad, Zack. Like the Saved by the Bell OG, Mac (played by Hoog), is behind plenty of high school highjinks. After appearing in Harriet and guesting on Roswell, New Mexico, the actor can next be seen in the 2021 Conjuring film, The Devil Made Me Do It.

Pascual-Peña, who appeared alongside Saved by the Bell co-star Josie Totah in Amy Poehler's Moxie, plays the fun-loving and competitive Aisha, who makes a major splash at Bayside when she tries to join the boys football team.

A budding reality star, sharp-tongued cheerleader, and the most popular girl at Bayside, Lexi could well be Bayside High's Regina George. Totah, who came out as transgender in an Aug. 2018 Time essay, has also had roles in Spider-Man: Homecoming, NBC's Champions, and Netflix's No Good Nick.

Daisy (played by The 40-Year-Old Version actor Velazquez) is an affable Bayside sophomore who's excited to about transferring to Bayside after her school closes in the wake of Governor Morris' budget cuts.