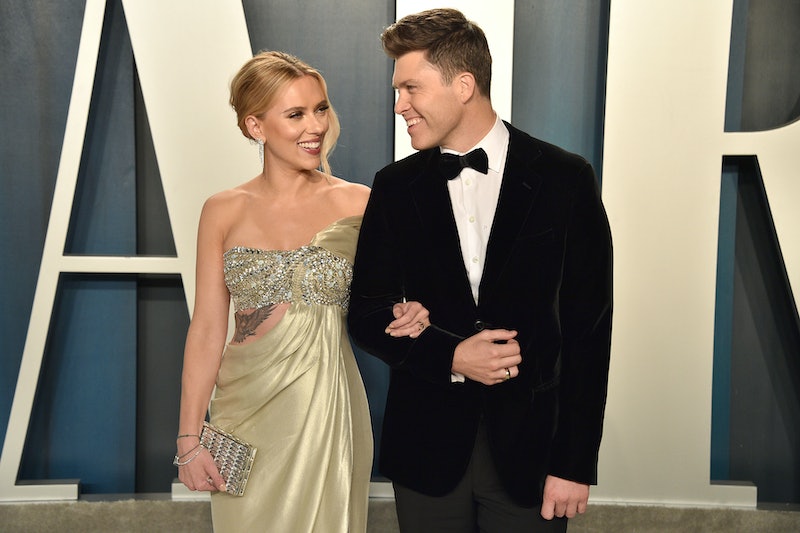 Colin Jost and Scarlett Johansson have welcomed their first child together. On Aug. 18, the Saturday Night Live head writer confirmed the recent birth in a very brief statement on Instagram. The baby boy, named Cosmo, is Jost’s first child and Johansson’s first son, following the birth of her daughter Rose with journalist Romain Dauriac in 2014.

“Ok ok we had a baby,” Jost revealed on Instagram. “His name is Cosmo. We love him very much.” He asked for privacy for the family and cheekily included that any and all inquiries should be directed to their “publicist” — fellow SNL head writer Michael Che. Jost also hashtagged the image set #WeGotAwayWithItForALongTime, #NoKidsPolicy, and #WereGoingToDisneyWorld.

It’s unclear the exact birth date of Cosmo, but in July 2021, Page Six reported that Jost and Johansson were expecting and that they were due soon. “Scarlett is pregnant but has been keeping it very quiet,” a source said. “I know she and Colin are thrilled.” Jost recently stated that they were expecting during a Aug. 15 standup set in Connecticut, but Deadline film Co-Editor-in-Chief Mike Fleming Jr. said that Johansson was “in the hospital in labor” at the same time that Disney issued their response to her Black Widow lawsuit on July 29.

The couple, who first met on the set of Saturday Night Live back in 2006, didn’t spark romance rumors until over a decade later when they were spotted together at an SNL afterparty in 2017. “The first time she hosted was the first year I was a writer on the show,” Jost told Entertainment Tonight in 2017. “So, we’ve kind of known each other since then ... she’s the best.”

Jost and Johansson didn’t make their official debut as a couple until they stepped out together on the red carpet for Avengers: Infinity War in 2018. The duo have been inseparable ever since, appearing at multiple events together throughout their relationship that range from the Avengers Endgame premiere to ice skating together on fellow SNL star Michael Che’s Instagram Story.

In 2019, AP announced that the couple had gotten engaged. Speaking on The Ellen Show, Johansson called Jost’s proposal “a whole James Bond situation,” adding: “It was very personal. It was a very special moment and I think, more than anything, when someone tells you they want to share the rest of their life with you and that just is a lovely, special thing.” In October 2020, Meals on Wheels revealed that the two were wed in “an intimate ceremony with their immediate family and loved ones.”