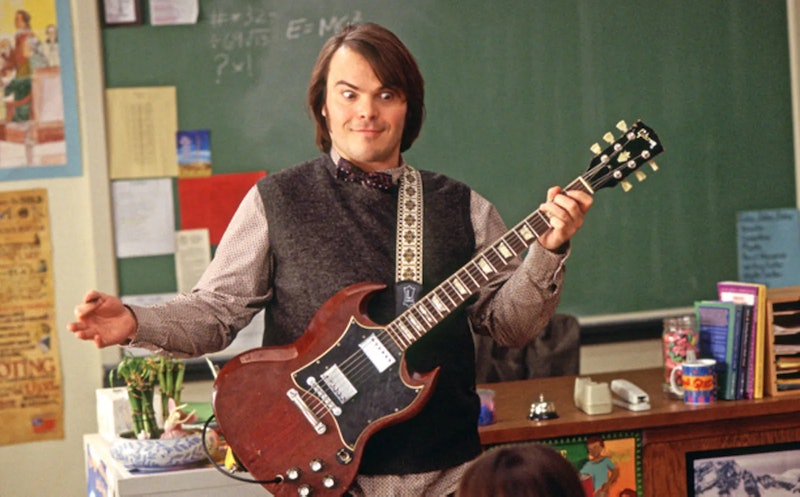 At long last, School of Rock has arrived on Netflix. The 2003 film isn’t just a classic because it spawned a TV show and a musical, although it did do both of those things. It’s beloved because it’s kind-hearted and joyful — and it’s actually aged pretty well, relative to other early ’00s movies. Maybe that’s because it was directed by Richard Linklater (Before Sunset, Boyhood) and written by Mike White (yes, that’s right, the creator of The White Lotus).

In many ways, though, School of Rock is as far from The White Lotus as you could possibly get: It’s life-affirming, gloriously goofy, and most of the characters get happy endings. All these years later, it remains a seminal feel-good film about following your dreams and tapping your hidden potential — all of which makes the movie a perfect Netflix watch, particularly after a long day.

But while it definitely holds up, some things have changed in the nearly two decades since its release, and seeing School of Rock nowadays is a very different experience. Below, a few things I noticed while rewatching the classic film.

This movie will remind you that you’re old.

Miranda Cosgrove, who’s now an accomplished (adult) actor, is a literal child here. It’s telling that this time around, I related to Joan Cusack’s harried principal more than the kids. Sigh.

Also, Joan Cusack, I miss you.

I realize she’s been in some recent films (Popstar: Never Stop Never Stopping, Toy Story 4) but I want my favorite oddball in more roles, please. Speaking as an awkward kid-turned awkward adult, I treasure her.

This film is basically a gentler AP Bio. I never noticed the common DNA between Black and Glenn Howerton’s characters because they’re portrayed so differently, but it’s a good reminder that coopting young minds for petty justice is always funny, no matter the context.

Most of this would absolutely never happen today.

This man would be so arrested for impersonating a teacher and absconding with several underage children, even if it was all in the name of rock. While the cops do show up at one point, Dewey isn’t seen suffering any legal consequences. It’s a testament to the quality of the movie (and Black’s super-innocent Dewey) that we even buy the premise at all.

... but every parent should watch this movie.

I am definitely not suggesting you arrange for a wild-man to kidnap your child and teach them rock music on the sly (see my previous point). But as a new parent, I genuinely teared up watching the adults go from disapproving to wowed by their very talented children. Just because your kid’s passion might look ridiculous, doesn’t mean it is.

I forgot about the queer-coded character!

It’s not stated outright, but Billy is portrayed as gay, and when he throws himself into designing beautiful costumes for the band, he’s allowed to shine: Not once does anyone poke fun at him, call him a slur, or make him feel out of place. Is the performance a bit cliche? Yes. Is it also joyfully celebratory? You bet. And his costuming work is gorgeous!

It’s worth noting that some of School of Rock’s child actors, including Billy’s Brian Falduto, struggled after the release of the film — but Falduto’s also said he’s proud to be “a relatable image for so many people in my exact same situation.” There’s nothing that makes my little heart happier.

And the film’s handling of fat-shaming is beautiful.

Dewey is complimentary of every student and finds something beautiful in all of them (sniff), but he’s especially considerate when Tomika (Maryam Hassan) tells him that people will laugh at her singing because she’s “fat.” In response, Dewey opens up about his own body image issues, then proceeds to compare Tomika to Aretha Franklin, and assure her that everyone will love her: “You’ve got something everybody wants — you’ve got talent!”

The best part of this movie is the attention to detail.

The musical Easter eggs and the real-life performances are a delight, of course, but ultimately it’s Linklater’s devotion to realism — a perfect counterbalance to Black’s charismatic performance — that pulls the whole thing together. From the change in Dewey’s hair part when he’s impersonating Ned to the student lighting designer freaking out at some last-minute programming changes, you totally buy that this insane premise is really happening.

And Sarah Silverman is probably the worst.

It hurts me to say this as a Silverman fan, but there wasn’t much she could do as the buzzkill girlfriend. Silverman’s appeal is in her sweet, snarky, off-kilter brand of humor — and School of Rock gives her no chances to show it off.

I’m glad this kicked off Jack Black’s career as a kid-friendly icon.

Technically, Black voiced an Ice Age character before this movie, but his subsequent PG-rated hits (Kung Fu Panda, Jumanji, Goosebumps, The House With a Clock in Its Walls) all echo his high-energy but super-sweet performance in School of Rock. As wild as Dewey is, he’s also an innocent man-child who finds his purpose in infecting students with his enthusiasm. He’s said this is the movie he’s the most proud of, and you can see why.