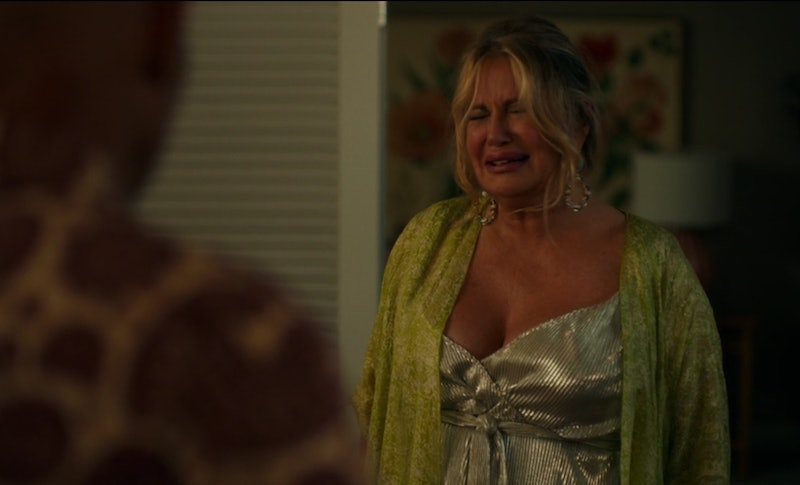 In Sunday’s episode of HBO’s The White Lotus, Tanya McQuoid (Jennifer Coolidge) begins to unravel after a fun, but serviceable sleepover with a fellow resort guest named Greg (John Gries). Her anxiety sets in the morning after, when she tries to make plans to get together again and he responds by... seemingly faking a coughing fit. The panicky feeling builds until their second date, during which Tanya goes full meltdown, launching into a refreshingly unchill rant about all her issues and insecurities. It’s a vulnerable move that’s surprisingly well-received by Greg, and, dare I say, rather inspirational to watch.

Tanya’s post-date spiral, though it approaches parody (the next day she tells Greg, deadpan, “I’m going to go in and lay down on my bed and just wait for you to text me”) will be familiar to anyone who’s gotten too in their head after a hookup. “I just know I’m going to get hurt,” Tanya tells Belinda, the White Lotus staff masseuse and Tanya’s confidante, played by Natasha Rothwell. She’s sure she’ll lose him once he discovers her true self. “Every step along the way, I have to worry about, you know, ‘Is he going to like the next layer?’” she confesses. “At the core of the onion, Belinda, is just a straight-up, alcoholic lunatic!”

Nevermind that Greg’s just some guy: a Hawaiian-shirt clad, middlingly attractive, half-charming, half-jerk who works for the BLM — that’s the Bureau of Land Management, not Black Lives Matter, to Tanya’s chagrin — and this is just a vacation fling. The day after their date, she’s a mess, pacing outside his room, stalking him at the pool, and ditching Belinda mid-dinner the second he texts her to meet him for a drink. She’s a grown woman fully succumbing to her dating neuroses, and it’s hard to watch, if not for Jennifer Coolidge finessing every cringe moment with her maudlin hilarity.

But Tanya’s freakout surprisingly culminates in an ultimately positive conversation between the two. Back on the couch again with Greg, Tanya pauses their makeout to tell him everything on her mind — to reveal her inner crazy, “the core of the onion,” as she puts it — and asks him to leave. She tells him she’s “a very needy person, and deeply, deeply insecure;” that both her parents mentally abused her; and she still carries around her dead mother’s ashes. She starts ugly-crying, ranting about being a “dead-end” and a “trap door,” even foisting the urn of ashes on Greg. “You’re f*cking crazy!” he says. “I am, and there’s nothing I can do about it! Please get out!” she says.

But then, Greg flips the script. “No. I still want to f*ck you,” he tells her. Back on the couch again, he reassures her by saying, “You’re not really cuckoo.”

This is not meant to be a big romantic moment—Greg probably just wants to get laid, and maybe he’s even turned on by her “craziness.” I doubt this is the beginning of a great love affair, although I guess we’ll leave that to the next (and final) episode. But I found it satisfying to watch Tanya lay out her damage so early on, and see Greg unfazed by it.

Her rather unhinged confessional is the antithesis of the “cool girl” ploy in dating, where women go with the flow and downplay their emotions, the idea being that the person you like won’t get scared off if they never see your messiness. But that cagey approach isn’t sustainable; your insecurities and dysfunctional behaviors are going to reveal themselves eventually, so why not get it all out in the open early on instead of finding out later that you’re not compatible?

There’s also the reality that “everyone has some sort of ‘baggage,’ whether it’s from previous relationships or family of origin,” Marisa T. Cohen Ph.D., relationship expert at Paired, tells Bustle.

Often, what we’re anxious about revealing — a messy divorce, a chronic illness, or a penchant for dramatic mom-related outbursts mid-makeout — might not actually be a huge deal for the other person, Cohen says. At the end of the day, we’re our own harshest critics.

“There’s no ‘wait three months before sharing something bad’,” says Cohen. “If you think, ‘this is something they should know about me,’ you gotta do it because otherwise you’re going to feel like you’re holding back.”

But if you can, maybe don’t lead with a Tanya-style word vomit. It’s always better to be calm and intentional when you communicate your vulnerabilities to another person, so you don’t overwhelm or put pressure on them to reciprocate the same level of intimacy before they’re comfortable, she suggests. “You don’t want to act from a place of fear.”

Getting the talk out of the way early on is best: “It’s going to be on your mind and affect your behavior if you repress it, and if you continue to wait, [that anxiety] will get worse and worse,” Cohen says.

And hey, if they’re not down with you and your damage? So be it, that’s good information for you to know sooner rather than later. May as well show ‘em the core of the onion and they can see if they like the crazy inside.

More like this
30 Clever Ways To Slide Into Your Crush's DMs
By Griffin Wynne, Carolyn Steber and Lexi Inks
Are Quality Time & Gift-Receiving Love Languages Compatible?
By Lexi Inks
Why Acts Of Service & Gift Love Languages Are A Dream Pairing
By Lexi Inks
The Differences Between Polyamory & Open Relationships
By Lexi Inks
Get Even More From Bustle — Sign Up For The Newsletter