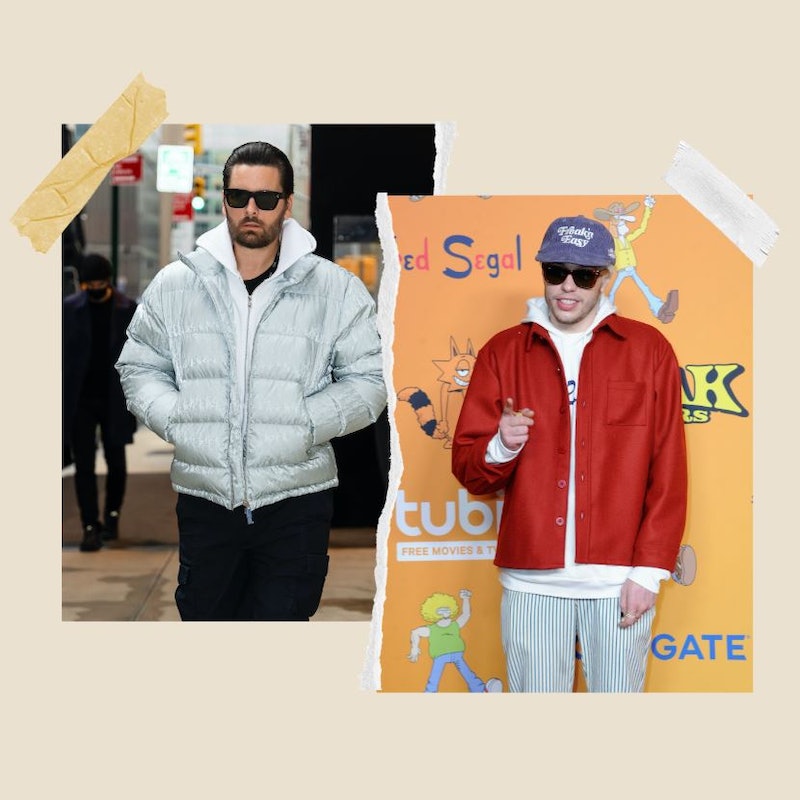 Despite the fact that Kourtney Kardashian is marrying Travis Barker, Scott Disick remains a part of the family — and he apparently still feels free to make dirty jokes on her sisters’ socials. Case in point? His comment on Kim Kardashian’s Jan. 6 Instagram post that seemed to reference an intimate part of Pete Davidson’s body.

The middle Kardashian sister had posted a swimsuit selfie from her trip to the Bahamas with the Saturday Night Live star, borrowing from Mariah Carey in her caption: “Sweet, sweet fantasy baby.” Disick then joined the millions of people who interacted with the post, commenting, “Damn! Where’s the tripod!” The quip was taken by many of Kardashian’s followers as an allusion to the Pete Davidson BDE lore, and it got a big reaction. Disick’s comment had already garnered hundreds of replies at the time of this writing.

“Hahahaha he’s calling Pete a tripod…. Big D energy,” one person wrote alongside multiple face-with-tears-of-joy emojis. Another added, “you know who he’s talking about, genius comment” with an applause emoji. Similarly, someone else dubbed it the “best comment on here,” highlighting the “Big energy!” of it.

Of course, not everyone immediately got the joke… or appreciated it. One person was confused at first and replied, “ahhhh....I thought you meant it to use a tripod instead to get more of a wider pic. Guess I was wrong?!?!” Still another fan simply wrote, “scott is so embarrassing.”

Regardless of their thoughts on Disick’s joke, the reason why so many fans drew the Pete-tripod connection is because of the SNL star’s ex-fiancée, Ariana Grande. The “POV” singer got very specific about the size of Davidson’s penis in a 2018 tweet and then referenced it in her “Thank U Next” music video, leading to the term “big d*ck energy” going mainstream. It’s become a major talking point for fans whenever they speculate on the many high-profile women Davidson has dated.

Perhaps ironically, the actor doesn’t necessarily appreciate all the attention Grande’s comments have brought him. During a 2019 standup show in Tarrytown, New York, he brought it up. “I don’t like that she talked all that sh*t for my penis,” the comedian said, per Elle. “Everything is huge to her. Why would she tell everyone that I have a huge penis? So that every girl who sees my dick for the rest of my life is disappointed.”

Disick’s joke, however, seems to indicate that things are still going well for Kardashian and Davidson. The two first sparked dating rumors in October after the Keeping Up With the Kardashians vet hosted SNL, and they’ve been hanging out on both coasts ever since. In fact, on Dec. 18, they were photographed at the movies in Staten Island, with none other than Disick in tow, per Metro. Maybe this is the self-proclaimed lord’s way of furthering that bond.