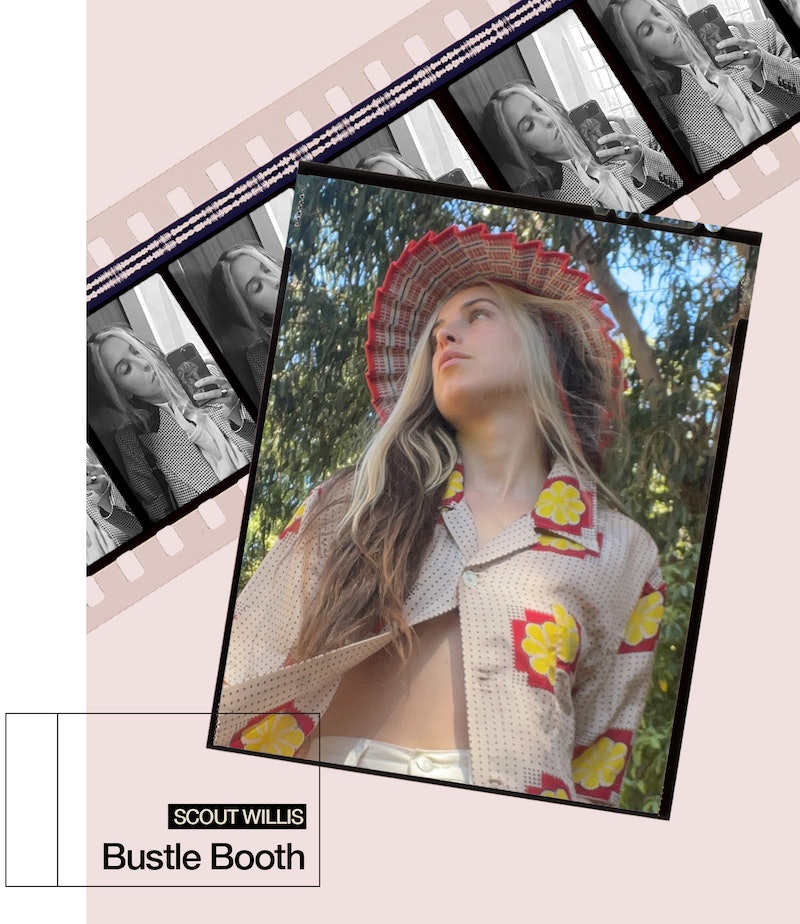 Like many singer-songwriters, Scout Willis comes from a family of music lovers. Her father played The Coasters in the car on the way to school, and exposed Scout and her sisters to classic rock groups like The Beatles, The Rolling Stones, and The Monkees; her mother, on the other hand, surrounded the three girls with ’90s R&B and the stylings of Patsy Cline. “There was always music playing in our house,” the singer-songwriter tells Bustle. “My sisters and I would do performances of The Coasters’ songs at dinner parties for my parents’ friends.”

But in just about every other way, Willis’ upbringing was far from typical. Her Coasters-loving dad and Patsy Cline superfan mom? That’d be Bruce Willis and Demi Moore. “I’ve grown up in the public eye, and that has led to a lot of stories being created about me — a fear of judgment, a fear of being told I’m ugly,” says Willis. “[Music] has helped me to look at that pattern.”

The 31-year-old’s debut album, the self-titled Scout LaRue Willis, recounts her years-long journey toward self-love. Once she moved from New York back to LA a few years back, Willis dedicated herself entirely to healing — trying classes in sensual movement, spending days at beach, and even taking a spiritual psychology course with her mom and her sisters, Rumer and Tallulah. She wrote lyrics as a way of processing her relationships, her heartbreak, and her family history with addiction. “Some songs I wrote in an hour,” she says. “‘Goodbye’ is a song I wrote right after I decided to get sober and I went to an [Al Anon] meeting, and I left and it just came all the way through in one go.” If you play the album’s tracks in order, as Willis’ voice careens between rageful and folksy, you hear the story of a woman coming into her own.

It’s not just her mind that’s at peace. “I never understood what people meant when they were like, ‘I want to be embodied’ up ‘til now,” she says. “I’ve lived a lot in my mind in the mental realm, in the analysis, so I’ve been making that transition.” Nothing illustrates this better than her music video for “Woman at Best.” She shatters glass in her hand and thrashes in fury, letting her anger course through her body, before settling down onto the kitchen floor with a bowl of red-ripened cherries. The juice dribbles down her chin: sweet satisfaction. Willis has worked hard to get here, and now she’s enjoying her well-earned reward by the fistful — or, as she puts it, “I’m in a phase of intentional hedonism.”

Learn more about Scout Willis — including her love of The Bear — in her Bustle Booth questionnaire below.

Iced coffee with oat milk, the largest size they offer.

I am on the Cancer/Leo cusp, with Cancer rising and a Scorpio moon.

Anything from Ace Ventura.

I just finished The Bear — I was completely hooked. I am obsessed with kitchen culture.

On any given day it can swing from Willem Dafoe to Lizzo.

For a while it was “Believe” by Cher, and recently it’s been “Touch Myself” by the Divinyls.

“Wow, she is so generous with sharing her joy and so deeply embodied in her sensuality and creative expression!”

More like this
On 'Industry,' Marisa Abela Takes Control
By Morgan Leigh Davies
Lauv Is No Stranger To Taylor Swift, Drake, Ed Sheeran, & Fame
By Alyssa Lapid
Christina Perri Had No Idea Her 'Twilight' Song Is On YouTube's Top 100 Chart
By Radhika Menon
At 14, Rachel Sennott Had A Sexual Awakening While Reading 'Twilight'
By Samantha Leach
Get Even More From Bustle — Sign Up For The Newsletter