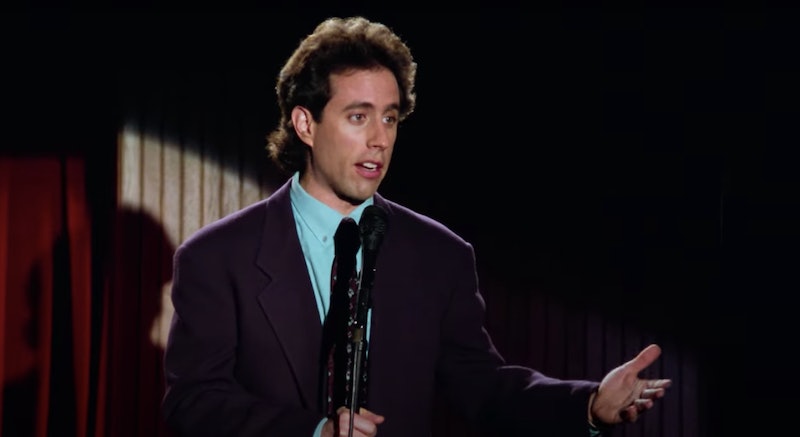 Seinfeld is often touted as “a show about nothing.” Across nine seasons, Jerry, George, Elaine, and Kramer weave in and out of every mundane and convoluted scenario imaginable, offering observations and memorable ‘Seinfeld-isms’ along the way. Since its premiere in 1989, the show has become a cultural touchstone and been hailed as one of the greatest and most influential sitcoms of all time. But it actually had much humbler beginnings.

The show was originally titled The Seinfeld Chronicles but was later shortened to just Seinfeld — the last name, of course, of co-creator and star Jerry Seinfeld, who was then a rising comedian. After the pilot episode aired on NBC, it seemed unlikely that the show would be picked up to series, and it was offered to Fox before eventually landing back at NBC. “In the history of pilot reports, Seinfeld has got to be one of the worst of all time,” NBC’s former President of Entertainment Warren Littlefield told Fox in 2021. “I have it next to my desk; it says overall evaluation ‘weak.’ The audience did not like the show and that scared us, but we did manage to find money to film four episodes to hold the show intact.” These subsequent episodes were rated highly, and things took off from there.

So was the pilot really that bad? Here are 10 things I noticed rewatching the episode over 30 years later.

Seinfeld doesn’t work without Jerry Seinfeld’s comedy, and his character is basically just a less famous version of himself. Most episodes include one or two minutes of Jerry doing a set at some comedy club, acting as an intermission, opening, or bookend for an episode. There are four separate stand-up scenes in the 23-minute pilot, totaling seven minutes. So essentially one third of the episode is just Jerry doing his material onstage.

The episode opens with Jerry riffing on thrill of going out. “We’re all out now. No one is home. Not one person here is home.” This feels oddly prophetic in 2021, given that most of the world has been stuck inside for the better part of 18 months. He also remarks that once people are out, they immediately start planning when they’re going to leave and go home, which also feels reminiscent of the dubious feeling that comes with socializing after prolonged lockdown.

The core four are key to Seinfeld. However, the usual quad is reduced to a trio in the pilot, because Julia Louis-Dreyfus’ iconic character Elaine is nowhere to be seen and isn’t even referenced. There’s a waitress named Claire who appears in the episode who was originally meant to be the female foil to the male-heavy cast. But once Seinfeld was ordered to series, co-creator Larry David cast Dreyfus to fill that role instead, having worked with her at Saturday Night Live in 1982.

It Has Its Woke Moments

The plot of the episode revolves around Laura, a woman Jerry met in Lansing, Michigan and is now coming to stay with him in New York for a couple of nights. Not wanting to assume her intentions, Jerry brings in a separate bed for Laura, to which Kramer remarks, “Why even give her the option?” Jerry immediately rebukes this as scumbag behavior, and in a later stand-up set, he skewers men who catcall. The show certainly had some controversial moments, but this came off as fairly considerate for the late ‘80s.

George and Jerry spend a lot of the episode trying to decipher Laura’s expectations. Rather than simply asking Laura how she feels about Jerry, they dissect her word choices and body language. It’s a pretty evergreen representation of the way that dating can sometimes feel like a guessing game, especially when things are casual.

They Don’t Go To Monk’s Café

The memorable, neon-signed diner that serves as a rendezvous point for the main gang throughout the series is noticeably absent in the pilot. Instead, George and Jerry go to an undisclosed diner where they’re served by Claire.

It’s organized mostly the same, but all the amenities, decor, and furniture look as though someone tried to recreate his later-seasons apartment from memory. The bookshelves, cereal boxes, and bike in the bathroom are nowhere to be seen, and the apartment’s exterior is entirely unfamiliar.

Kramer is the quintessential wacky neighbor known for, if nothing else, aggressively bursting into Jerry’s apartment at any given moment. In his first appearance on the show, however, Kramer politely knocks before entering. Beyond that, he’s still the eccentric, bumbling fool from across the hall. Oh, and he has a dog for some reason.

It’s A Lot Of Observational Humor

Jerry Seinfeld has always been an observational comic, lampooning the more tedious aspects of life. The pilot showcases these sensibilities. Though there’s some situational humor between Jerry and Laura as well as Kramer’s physical comedy, the episode really shines when Jerry offers his unique takes on tedium like laundry detergent, cotton balls, bathroom routines, dating, and shirt buttons.

George Actually Has A Job

George Costanza is mocked throughout the series for essentially being the loser of the group. He spends many episodes lamenting his hair loss, unemployment, and the fact that he lives with his parents. However, in the pilot George has a job as a real estate agent, and a little more hair than usual.

More like this
All The ’70s Easter Eggs You Missed In 'That ’90s Show'
By Grace Wehniainen
At 28, Debra Jo Rupp Was Living A Much Different '70s Show
By Grace Wehniainen
Everything To Know About 'Cobra Kai' Season 6
By Brad Witter
Every 'That '70s Show' Character Who Returned For The Netflix Spinoff
By Grace Wehniainen
Get Even More From Bustle — Sign Up For The Newsletter
From hair trends to relationship advice, our daily newsletter has everything you need to sound like a person who’s on TikTok, even if you aren’t.