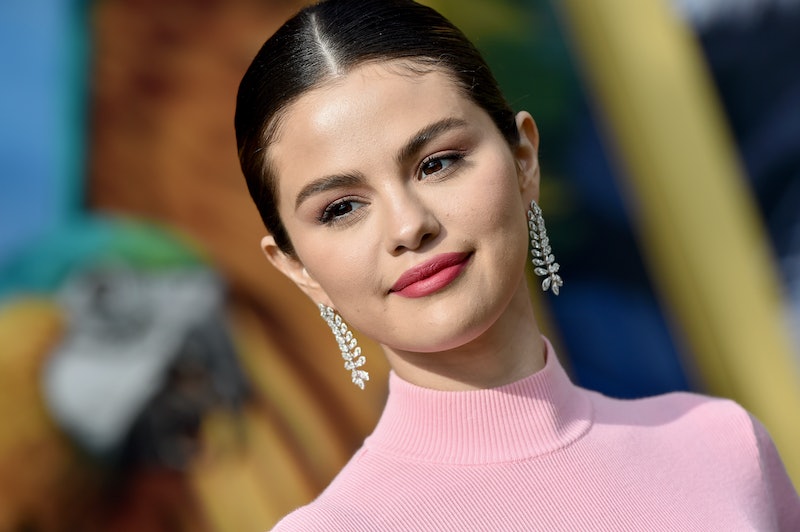 Ahead of the Aug. 13 premiere of her new HBO Max cooking series Selena + Chef, Selena Gomez shared how she's been taking care of her mental health in quarantine, revealing that it's allowed her to learn about herself in ways she never had before. The singer-turned-cooking show host has been candid about her mental health issues in the past, including her bipolar disorder diagnosis, and she didn't deny that the isolation of quarantine was "hard." But she's also used the time alone to connect with herself on a deeper level.

During WarnerMedia's virtual Television Critics Association press tour, Gomez acknowledged both the struggles and learning opportunities that she has experienced during these trying times. "I tried to find what I needed to get me through it," she said, per Entertainment Tonight. "I have great friends and I see a therapist and keep my mind positive. I've learned so much about myself. I've learned more about my country than I ever have from school or anything. So I've been very grateful for that as well."

Gomez has largely been absent from social media in recent months, and her choice was a deliberate one. In a July 28 Instagram Live, she shared that she stepped back because she wanted to take "time to learn, truly learn about what's going on" in the world, adding that she felt it was "a little insensitive" to post things that were "joyful" during this time. The 28-year-old also said that she was going to continue to focus on listening and learning moving forward.

Even as she keeps her focus on the learning, Gomez is also sharing her experience of coping with the toll that quarantine put on her mental health in hopes of letting others know they're not alone. "It’s not easy for anyone to be walking through what we're walking through," she said. "It’s not normal, and it’s affecting people, specifically with mental health, and people who could have never thought about things they're thinking about now."

Focusing on your own mental health when so much is going on in the world can feel overwhelming, but it's also vital. For Gomez, her upcoming cooking show, which chronicles her adventures in the kitchen under the virtual guidance of renowned chefs, was a creative outlet that allowed her to channel some of her own anxieties into something positive. The singer hopes that the show will bring viewers a bit of respite, too.

"I really thought this would be something lighthearted because I was getting, definitely, down. And I know that a lot's going on," she said. "Of course, there are more important things going on, but this was an opportunity to make something that could make people smile."

More like this
4 Surprising Celeb Throuples That Got The Internet Talking
By Sophie McEvoy
Paris Hilton & Carter Reum’s Relationship Timeline Includes A 2023 Grammys Date Night
By Bustle Editors
9 Photos Of Celebrity Couples & Unexpected Duos At The 2023 Grammys
By Jake Viswanath
The History Of Taylor Swift's "All Too Well" & What The Lyrics Actually Mean
By Jake Viswanath
Get Even More From Bustle — Sign Up For The Newsletter
From hair trends to relationship advice, our daily newsletter has everything you need to sound like a person who’s on TikTok, even if you aren’t.