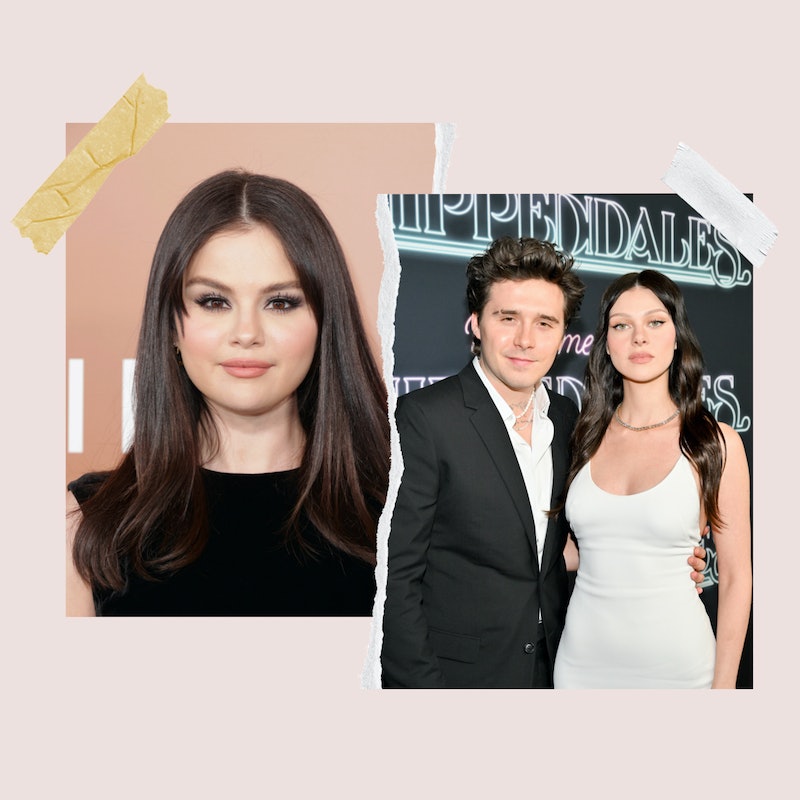 A new year was bound to bring us a new famous pairing or two but this latest combo of celebs has definitely got the internet talking, mostly because they’ve been dubbed a “throuple” by one of their own. For their New Year’s Eve celebrations, Selena Gomez enjoyed a yacht trip in Mexico with Nicola and Brooklyn Peltz-Beckham, Raquelle Stevens, who recently appeared in My Mind & Me, and others. Taking to Instagram, Gomez shared photos of herself embracing the Peltz-Beckhams, hilariously captioning the post: “Fine calls us a throuple #foreverplusone.” The images included the trio embracing in a hug, selfies of Peltz and Gomez, and the two women getting their hair and makeup done.

Gomez was reportedly spotted on Dec. 30 arriving to Los Cabos, Mexico, with Peltz and Beckham to ring in 2023. The newly-weds also shared a number of Instagram posts from their New Year’s break, including Peltz and Gomez in matching silver sequin Valentino mini-dresses and the larger group of friends having a beach day, which included dancing, beers, and playing a classic game of Jenga.

But sharing a real insight into their trip, the 27-year-old model and actor shared a sweet video with Gomez’s song “Calm Down” with Rema playing over the various clips. The video included the group having lunch on the yacht whilst having a boogie (because why not?), Gomez and Peltz seemingly watching out for sea life with binoculars, and everyone enjoying a dip.

But this wouldn’t be the first time that Gomez and Peltz spent the holidays together. The pair also celebrated Thanksgiving together last November at her home with Beckham (along with some other friends) with Beckham sharing a video to Instagram with the caption: “Fish and chips with @nicolaannepeltzbeckham and @selenagomez @bradleygpeltz @raquellestevens.”

There has been some speculation that Gomez may be dating Nicola’s 33-year-old brother, Brad Peltz, who was in attendance at the Thanksgiving dinner. Bustle has reached out to Selena Gomez’s representative for comment.

More like this
4 Surprising Celeb Throuples That Got The Internet Talking
By Sophie McEvoy
Michaela Coel Has Some *Thoughts* About The Nepo Baby Discourse
By Maxine Harrison
Twitter Is Saying The Same Thing About Beyoncé's Renaissance World Tour
By Shahed Ezaydi
Watch The Sweet Moment Adele Stopped Her Vegas Concert To Kiss Her Son
By Sophie McEvoy
Get The Very Best Of Bustle/UK
Sign up for Bustle UK's twice-weekly newsletter, featuring the latest must-watch TV, moving personal stories, and expert advice on the hottest viral buys.