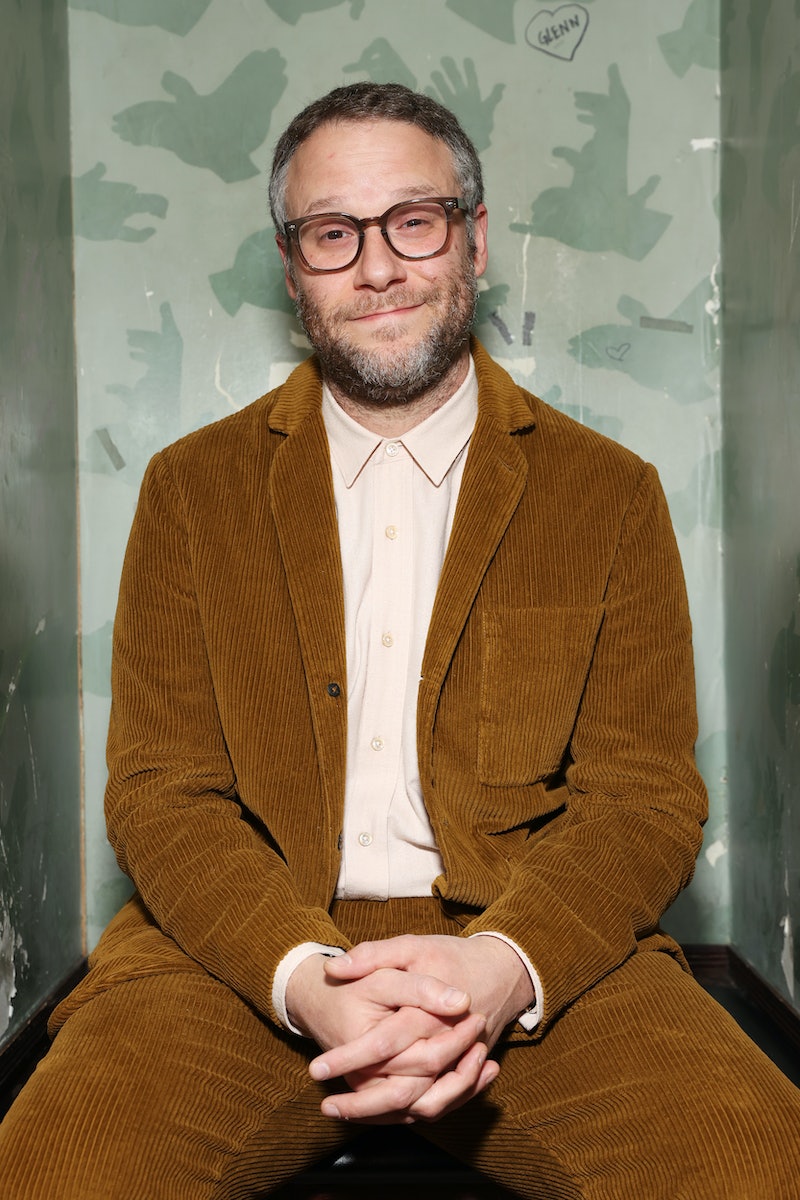 Drake, Lizzo, Selena Gomez, Nicole Richie, Donald Glover, Melissa McCarthy, and Leonardo DiCaprio, were among the countless A-list celebrities at Adele’s One Night Only special, but it was actor Seth Rogen who scored a coveted front-and-center seat. As it turns out, the Pineapple Express actor, who was smiling and clapping along with wife Lauren Miller in the front row, was as perplexed about his placement as several viewers. To put it bluntly, he had no idea why he was at the Adele concert’s unexpected taping — nor was he in the headspace at the time to figure out the reason.

Appearing virtually on The Tonight Show Starring Jimmy Fallon’s Dec. 1 episode, Rogen shared the “confounding story” of how he ended up in the front row of what he believed would be “a small Adele concert” — not a massive TV special. Ahead of attending the event at Los Angeles’ Griffith Observatory on Oct. 24, as Rogen explained, he and his wife decided to smoke marijuana. “We were like, it’s an Adele concert, it’s in the park. We smoked a ton of weed and were like, ‘We’re just going to go and enjoy this lovely Adele concert.’”

After arriving and spotting a full crew, camera cranes, and drones, however, they realized this wasn’t the low-key, private affair they’d been expecting. “The first person I see is Oprah Winfrey,” he recalled to the late-night host. “Then me and my wife were like, ‘Maybe we can just slink into the background, like we’ll just sit in the back, it’s fine. We’re not equipped mentally to deal with doing this right now.’ So we go up to the desk and they give us our tickets, and our seat numbers literally are 1A and 1B ... as close as you can fathomably be.”

Noting that he was seated in front of Drake, Ellen DeGeneres, Kris Jenner, and “so many more famous people” than himself, Rogen joked that he “could just feel them be insulted that I had such a good seat.” Adding that he has “no idea” why production placed him in the front row, the actor said he tried to play the part, regardless: “It was truly wild. … The whole time I was like, ‘Just try to look cool.’ It was hard for me to look cool ’cause I’m uncomfortable, I’m too close. I feel Leonardo DiCaprio behind me, like, ‘Did Seth Rogen write “Rolling in the Deep”? Is that why he’s so close?’”

Even more baffling: Rogen says he’s never even met Adele. So he addressed the “Easy On Me” singer directly. “And if Adele, you’re watching this, why did you do that?” he joked on The Tonight Show. Despite being caught off guard, however, he ultimately had a great time, even joking that friends who haven’t watched his last five movies had been texting him about how “amazing” he was and how “incredible” the concert looked.

Rogen echoed that sentiment while sharing a clip of his story on Twitter. “I think the Adele concert is the most popular thing I’ve ever been featured in,” he tweeted on Dec. 2. Indeed, the concert, which CBS later aired on Nov. 14, attracted about 10 million viewers, per Variety, making it the most-watched entertainment special since April’s Academy Awards broadcast. But now we know that the ratings weren’t all that was high.

More like this
Selena Gomez Joked About Her Relationship Status In Her ‘SNL’ Monologue
By Grace Wehniainen
What Is Mandy Moore’s Net Worth?
By Hugh McIntyre
Kim Kardashian Reacts To Kanye West’s Diss Song “Eazy” On 'The Kardashians'
By Jake Viswanath
Britney Spears Met The Weeknd & Sam Levinson, So She May Actually Be On 'The Idol'
By Jake Viswanath
Get Even More From Bustle — Sign Up For The Newsletter