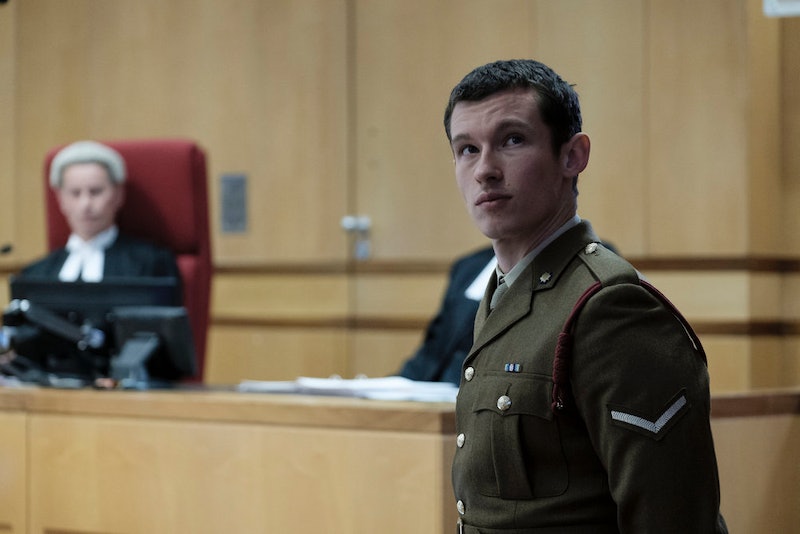 If you're already paranoid about technology, maybe don't watch Peacock's The Capture . At the center of the twisty conspiracy thriller is soldier Shaun Emery (Callum Turner), who, after being acquitted of a war crime, finds himself at the mercy of the courts once again. CCTV footage seemingly shows him assaulting his lawyer in the parking lot, but from what Shaun remembers, the two shared a kiss and then parted ways. On one hand, the footage seems pretty airtight. But on the other, Shaun just won a case due to flawed video evidence, so it's hard to tell what's real. Shaun may not be based on a real person, but the concerns his story raises about surveillance and doctored footage certainly make it feel that way.

There are two intersecting issues in Shaun's case. One has to do with Shaun being tried for shooting an Afghanistan soldier in combat, which seemed to reference a real-life case when The Capture initially premiered on BBC One in 2019. Somerset Live questioned if Shaun was based on Alexander Blackman, also known as Marine A, who was convicted in the 2011 Helmand Province killing. Per The Guardian, helmet camera footage captured a damning video that showed "Marines A, B, and C" executing a wounded Taliban insurgent who was out of the fight in September 2011. The Marines dragged him away from the field after he was injured in an air strike, and camera footage showed the three Marines taunting him before Marine A shot the man in the chest. Marine A then turned to the other two men and said, "Obviously this doesn't go anywhere fellas. I've just broken the Geneva convention."

After the anonymity order was lifted in December 2013, Blackman was sentenced to life in prison, but the conviction was later overturned when the court martial appeal court ruled Blackman had been experiencing mental illness at the time of the shooting. His sentence was reduced from life to seven years, and Blackman was released from prison on April 28, 2017.

This highly publicized case was likely on British viewers' minds when The Capture debuted, as the show opens with Shaun defending himself in court over a headcam video that seems to capture him shooting a wounded Afghanistan soldier. But a BBC spokesman told Somerset Live that "The Capture's story and characters are entirely works of fiction from writer and director Ben Chanan."

Similarly, Turner didn't base his performance on Blackman, and explained to the Daily Express that would have been a "disservice" to the real-life case, as "the respect for those cases are really different."

Rather than Marine A, Canan seemed more interested in exploring the very real issue of deepfake technology — machine learning that manipulates or generates fake content — and how that comes into play with Shaun and the fake CCTV footage. Canan explained to The Guardian that technologists have created a potential "nightmare scenario" in which producing footage has become increasingly integral to our justice system, yet camera systems can be easily hacked and footage can be easily edited.

Facebook has already banned deepfakes, and researchers have raised concerns about how this technology could be used nefariously. In May 2019, for example, a doctored video of Nancy Pelosi appearing to drunkenly address Congress made the rounds with Donald Trump and his supporters. And in 2018 in Central Africa, a video of Gabon’s president Ali Bongo, who was believed to be terminally ill, was decried as a deepfake by his political opponents, which triggered an unsuccessful coup.

"We are outgunned" when it comes to detecting and quashing deepfakes, UC Berkeley computer science professor Hany Farid told The Washington Post. "The number of people working on the video-synthesis side, as opposed to the detector side, is 100 to 1."

Combined with already existing issues of racial bias in facial recognition software, the way cameras and machine learning could be used in conjunction with our political and justice systems are pressing issues. Shaun's particular story may be fictional, but the misuse of technology that The Capture explores is sadly very real.

More like this
Hallmark’s The Way Home Is Like 'This Is Us' Meets 'Back To The Future'
By Grace Wehniainen
Andy Cohen Apologized To Larsa Pippen After A 'RHOM' Season 5 Reunion Dust-Up
By Brad Witter
The 'New Amsterdam' Series Finale Opens An “Unexpected” Door To The Future
By Brad Witter
Here’s What Happens To Bill & Frank In 'The Last Of Us' Video Game
By Brad Witter
Get Even More From Bustle — Sign Up For The Newsletter
From hair trends to relationship advice, our daily newsletter has everything you need to sound like a person who’s on TikTok, even if you aren’t.