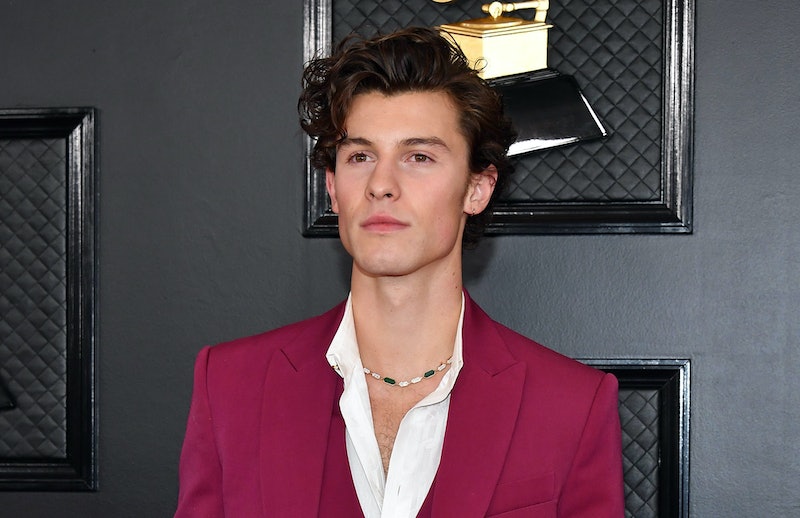 Shawn Mendes has had to battle speculation about his love life throughout his entire career, but not all of it was about his famous girlfriend, Camila Cabello. On the Dec. 14 episode of Dax Shepard's Armchair Expert podcast, Mendes addressed rumors about his sexuality, admitting that he "really suffered" from long-running speculation that he was gay.

During the interview, the singer explained the rumors have been following him since he was a teenager due to his "feminine" mannerisms, which became an insecurity of his. "Everyone's been calling me gay since I was 15 years old," he said. "I'm not gay, and I'm like, 'What does that mean?' I had these problems with the way my voice sounded. I'm like, 'How do I sit?' I'm always first to cross my legs and sit with a position of this feminine style, and I really suffered with that sh*t."

The "Wonder" singer said he grew frustrated with the gossip in part because he didn't know how to respond. "It's such a tricky thing," he said. "You want to say, 'I'm not gay, but it'd be fine if I was gay — but also there's nothing wrong with being gay, but I'm not.'" He also felt empathy toward the people in his life who were gay and had not yet come out.

He went on to add, "I think a lot of guys go through that, and even worse than that, there are just so many guys who are gay and in the closet and must be hearing sh*t like that and just being like, 'I'm terrified to come out.'"

This is not the first time Mendes has addressed speculation about his sexuality. In a 2018 interview with Rolling Stone, he said he made a conscious effort to be seen with women to dispel rumors about his sexuality, which spread through memes and YouTube videos that used his voice and gestures as "proof" he was gay. “In the back of my heart, I feel like I need to go be seen with someone — like a girl — in public, to prove to people that I’m not gay,” he explained. “Even though in my heart I know that it’s not a bad thing. There’s still a piece of me that thinks that. And I hate that side of me.”

Now, Mendes admitted the way he previously explained his sexuality might have caused fans to be hurt or even more confused about what he thinks. "I've realized that we just have to stop having to be experts and politicians about it, especially as a famous musician who's a guy," he said before adding that he wants to give himself space to mess up. "I need to be really f*cking messy and say the wrong things and apologize and say the right thing after I apologize and be confused about how to respond when people say I'm gay."

More like this
Stormzy Made A Passionate Speech About The Importance Of Diversity
By El Hunt
Pro Footballer Zander Murray Is "Blown Away" By Support After Coming Out
By Sam Ramsden
The 19 Best Tweets & Memes About Bisexual Awareness Week
By Lexi Inks
Is Dua Lipa Dating Trevor Noah? New Photos Show Them Kissing & Hugging
By Brian Anthony Hernandez and Martha Sorren
Get Even More From Bustle — Sign Up For The Newsletter