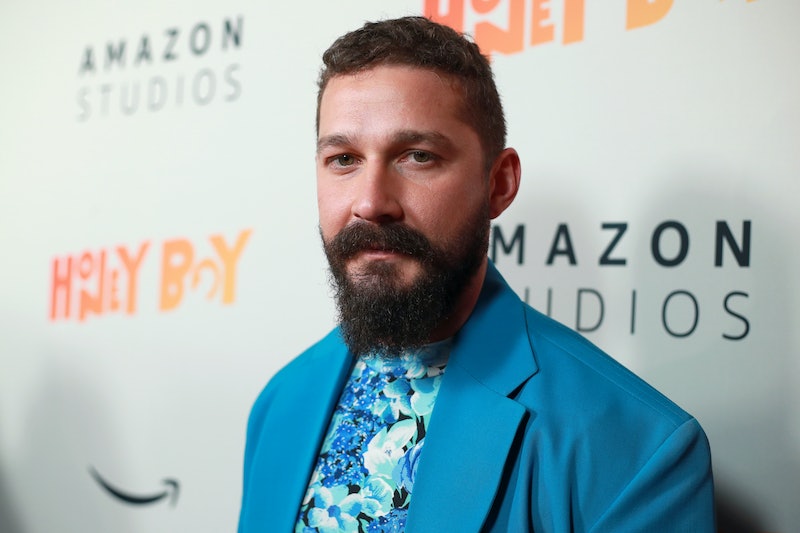 Following accusations of abuse from several of his former partners and the decision to check into a treatment facility, The Hollywood Reporter confirmed that CAA will no longer represent Shia LaBeouf in the wake of the sexual battery lawsuit that ex-girlfriend FKA twigs filed in December. Though one source said that it was LaBeouf's decision to part ways with his agency, the announcement comes shortly after two other high-profile celebrities — Marilyn Manson and Armie Hammer — were dropped by CAA and WME, respectively, following allegations of abuse.

According to the outlet, LaBeouf checked into an in-patient treatment facility in January, and decided around that time to take a break from acting and the entertainment industry as a whole. It's unclear what he is being treated for, but LaBeouf has been open about his struggles with alcoholism and addiction over the years, as well as his experiences with PTSD. "Shia needs help and he knows that," the actor's attorney Shawn Holley told Variety in December in response to the abuse allegations. "We are actively seeking the kind of meaningful, intensive, long-term inpatient treatment that he desperately needs."

On Dec. 11, FKA twigs (née Tahliah Debrett Barnett) filed a lawsuit against LaBeouf, whom she dated beginning in 2018 after they worked together on his film Honey Boy. In the suit, the singer detailed the "relentless abuse" that allegedly occurred during their relationship, including physical violence, emotional manipulation, and LaBeouf giving FKA twigs a sexually transmitted disease. At the time, LaBeouf released a statement claiming that "many of these allegations are not true."

The singer told The New York Times that despite the alleged abuse, she didn't go to the police because she was worried about LaBeouf's career and concerned that she wouldn't be taken seriously, as a woman of color. However, with the help of a therapist and some careful planning, she was able to leave the relationship and speak out. "What I went through with Shia was the worst thing I’ve ever been through in the whole of my life," she said. "I don’t think people would ever think that it would happen to me. But I think that’s the thing. It can happen to anybody."

In January, FKA twigs opened up about the moment she decided to get help during a conversation with journalist Louis Theroux, describing a "low moment" in which nobody intervened to rescue her from an alleged incident of abuse. "That was a low moment for me because I felt like I would never be believed," she said. "To have people see me being treated that way and not do anything, I felt really disheartened." However, when FKA twigs was alone, she contacted a domestic violence hotline, and the conversation helped her begin planning to leave the relationship.

"I remember going back to where I was staying and calling an abused women's helpline and I literally just Googled 'free women's abuse helpline USA.' I just called the first one that came up," the singer explained. "And her reaction to me was so serious, and she was like 'OK, from what you've said, it feels like to me you're in an unsafe place.'" Being believed was a "massive wake up call" for FKA twigs, and she was able to leave a few months later. "I had to spend a lot of time before I could leave to gather enough of myself together so that I knew, when I left, I really wouldn't go back, and I wouldn't give in no matter what he did."

In the wake of FKA twigs' lawsuit, several of LaBeouf's former partners also spoke out against the actor and accused him of abuse. Stylist Karolyn Pho is named in the lawsuit, alleging that LaBeouf once head-butted her until she bled. Shortly after the news broke, Sia claimed that she had been "hurt emotionally" by the actor. "I believe he’s very sick and have compassion for him and his victims. Just know, if you love yourself – stay safe, stay away," she wrote on Twitter.

More like this
Florence Pugh & Zach Braff Reflect On Their Relationship After Their Breakup
By Jake Viswanath
12 Years Ago, Austin Butler Manifested His Oscar Nom In This Disney Movie Scene
By Jake Viswanath
Here’s Everything Coming To & Leaving Netflix In February
By Jake Viswanath
North West Will Make Her Acting Debut Alongside Mom Kim Kardashian
By Radhika Menon
Get Even More From Bustle — Sign Up For The Newsletter