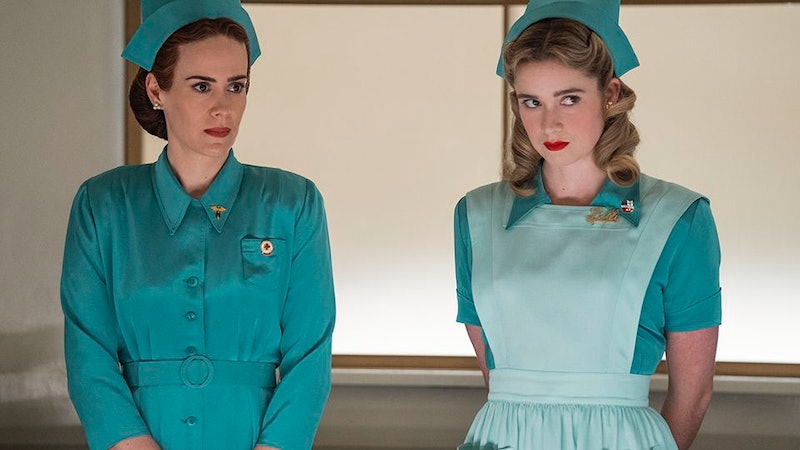 First published in 1962, Ken Kesey's One Flew Over the Cuckoo's Nest centers on a group of psychiatric patients locked up under the control of the tyrannical "Big Nurse": Nurse Ratched. The novel's narrator, Bromden, has long since retreated into himself, pretending to be deaf and mute to avoid the problems many of his fellow patients face. When a new patient, the incorrigible Randall P. McMurphy, fails to take Ratched seriously, and then purposely opposes her "leadership" of the ward, it's up to Bromden to narrate the power struggle between the two.

Ratched is everything a nurse should not be. She's cold, calculating, and manipulative. She knows exactly how to coerce, cajole, and crush her patients. Bromden describes her at length, saying:

What she dreams of... is a world of precision efficiency and tidiness like a pocket watch with a glass back, a place where the schedule is unbreakable and all the patients who aren't Outside, obedient under her beam, are wheelchair Chronics with catheter tubes run direct from every pantleg to the sewer under the floor. Year by year she accumulates her ideal staff: doctors, all ages and types, come and rise up in front of her with ideas of their own about the way a ward should be run, some with backbone enough to stand behind their ideas, and she fixes these doctors with dry-ice eyes day in, day out, until they retreat with unnatural chills.

As McMurphy's playfully rebellious attitude begins to pull the ward's residents to his side, Ratched goes to great lengths to subdue her patients and regain power. The tug-of-war reaches an ugly breaking point after McMurphy sneaks two sex workers and a lot of alcohol into the ward one night, so that Billy — a shy young man who has voluntarily committed himself and looks up to McMurphy as a role model — can have his first sexual experience. When Ratched discovers him in bed with one of the women the next morning, she threatens to tell his mother what has transpired — a threat that tragically causes the fragile and nervous Billy to kill himself. McMurphy's retaliatory physical attack on Ratched ends with a lobotomy that renders him the evil nurse's perfect patient.

Coming to audiences from the creator of American Horror Story, and starring Sarah Paulson in the title role, Netflix's Ratched will show how the terror of Kesey's novel began. Was Nurse Ratched always evil, or did something cause her to snap? Find out for yourself by watching Ratched.