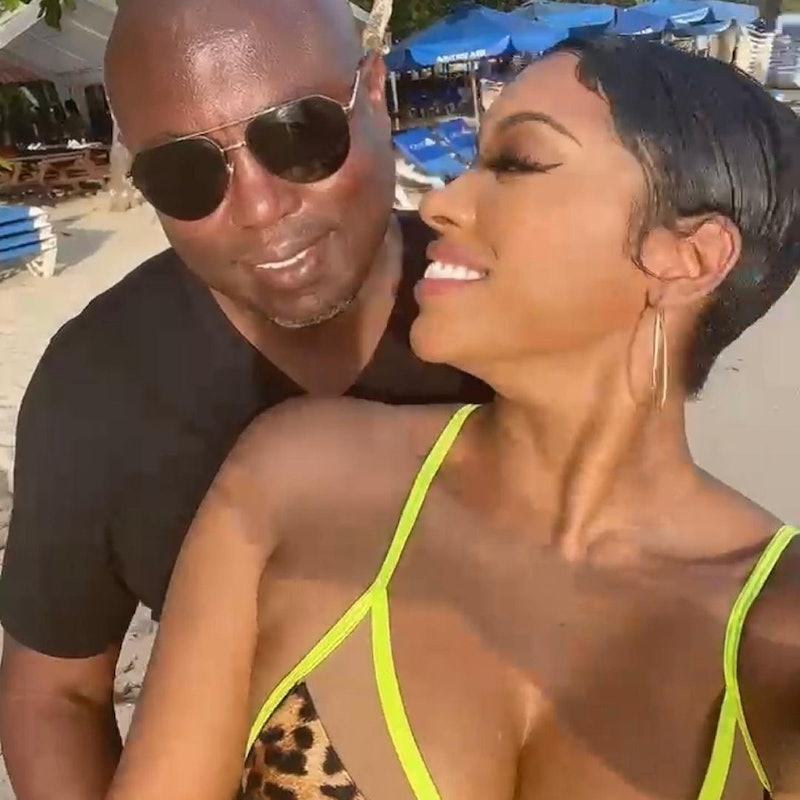 Real Housewives of Atlanta star Porsha Williams announced her new relationship with Simon Guobadia on May 11, the type of dating news that usually prompts a sea of “congratulations.” But in this scenario, Porsha totally broke the internet, because she is now engaged to her RHOA co-star’s estranged husband, Simon, which has set Twitter aflame.

Falynn Guobadia appeared as a Friend on the show on Season 14, and she even hosted a pool party for Porsha and her friends. But Porsha explained in her Instagram post that she’s not friends with Falynn, said that her relationship with Simon only began a month ago, and reiterated that she had nothing to do with their split. Simon filed for divorce from his wife in January, but it was only confirmed publicly in April, making fans question everything about Simon — including the timing of his new romance and what he does for a living. Here’s everything you need to know about the next Atlanta Househusband.

Simon’s Job: Well, He Has Many Titles

During his brief appearance on RHOA Season 13, when Falynn threw her party, it was evident that Simon and Falynn were living comfortably in a luxe Atlanta home at the time. However, fans weren’t privy to how he attained his wealth in the first place.

According to his LinkedIn page, Simon currently serves as CEO of three gasoline companies in Atlanta: the SIMCOL Group, KLC Petroleum Transport, and Simcol Petroleum Limited Company, LLC. The List reports that he has previously owned several restaurants, including one named after himself. He’s also a film producer apparently, having executive produced the 2019 movie Kill and the 2020 film Son of the South starring Lucas Till and Lucy Hale. All of these jobs add up to a reported net worth of $40 million.

Fans have recently been paying more attention to Simon’s Instagram page, but he’s already proven he will suffer no fools. Prior to meeting Porsha, his Instagram page was mainly filled with business promotions, snapshots of his six children (according to his SIMCOL Group bio), and of course, himself living his best life, with many photos on private jets. Anything related to Falynn has already been deleted.

Now, his Instagram is full of tributes to Porsha — and rebukes to anyone doubting their new relationship. “I asked her to marry me because we checked ALL of each other’s boxes, and then some,” he wrote on May 11, confirming their engagement. “We have done the individual work to sustain a healthy relationship, and I stand next to her, proud that we found each other. What we have is what we wish every single one of you out there: happiness. So when I asked ... she said yes. That is ALL that mattered.”

Simon’s dating history before marrying Falynn is pretty unknown, even though his current situation is all any Bravo fan can talk about. When announcing their divorce on April 22, Falynn revealed that she and Simon were married for two years, and dating for three years prior to their wedding.

According to Porsha, her and Simon have only been together for a month. However, Simon recently had to dispute claims that he cheated on both Porsha and his estranged wife during their respective relationships.

It’s unclear whether Porsha will return to RHOA next season, and therefore, whether Simon will appear alongside his fiancée. However, Page Six is reporting that Porsha has landed her own three-episode spinoff at Bravo that will focus on her family life and Black Lives Matter activism, and her new relationship with Simon just might be apart of it.

According to Porsha, her and Simon have only been together for a month. However, Simon recently had to dispute claims that he cheated on both Porsha and his estranged wife during their respective relationships, warning that he keeps “very meticulous record (receipts) of my life” to prove his innocence. Without naming the accuser in question, he wrote that there was “timeline issues with someone claiming to have dated me at the same time as my fiancée Porsha.” He went on to offer $50,000 to anyone who had proof that he cheated on Falynn while they were married, and an additional $25,000 for proof that he was dating other women.