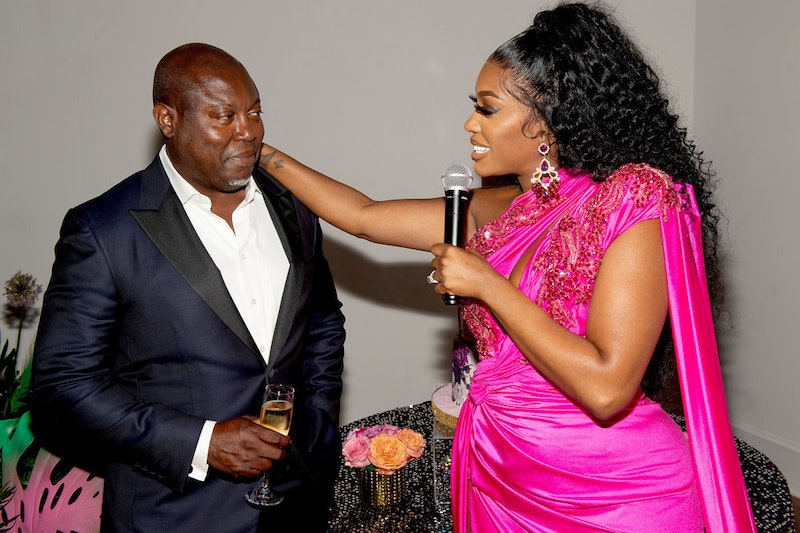 When Simon Guobadia marries the Real Housewives of Atlanta alum Porsha Williams, he’ll become stepfather to her 2-year-old daughter PJ. What fans may not know, however, is that Simon already has five children of his own from two of his previous three marriages. (He and his most recent ex-wife, Falynn Pina, never had any biological children together).

Guobadia hasn’t discussed his children or ex-wives much in the media, but his Instagram page is filled with tributes to his kids. “For those who know me well, know children hold a special place in my heart,” Simon captioned a June Father’s Day post spotlighting his kids, Quentin, 25, Christian, 11, Benjamin, 10, and Ximena, 9. “We cannot speak about legacy without speaking about our children. I love them all equally.”

Noticeably absent from the post — and his Instagram as a whole — is Guobadia’s first-born daughter and second eldest child, Nicole. According to a July episode of The Sunday Omony Show, Nicole, a current STEM PhD candidate at the University of Washington Tacoma, has “nothing to do with” Guobadia, who allegedly deleted all photos of her from his Instagram. However, there’s still a post from June 2020 up on Guobadia’s Facebook page in which he sent “hearty congratulations” to Nicole for graduating with a computer science degree, adding that she had “made the family very proud.”

According to The Sunday Omony Show, Nicole’s mother is Simon’s first wife, Karron English, to whom he was married for 20 years. English earned an MFA in fashion design while “having two teenagers and surviving them,” and now works as a college professor at the Art Institute of Atlanta. Nicole is reportedly still close with her mom and brother Quentin.

Guobadia, for his part, has implied that he wasn’t always the hands-on father his Instagram portrays him as now. “I am overwhelmed at the fact that I have missed much in their daily growth,” he captioned a March 24 post, noting that he hopes he can “can continue to get closer to [his kids] and travel more with them.” A month later, Guobadia also admitted that he has “not always” shown his “five gifted children” the individual attention they deserve. “But I am learning,” he wrote.

Despite his reported estrangement from Nicole, Guobadia wrote that he has felt like a “new dad” with his first-born, Quentin, who he named after Quentin Tarantino. Ironically enough, Quentin, like his namesake, has pursued a film career and is studying for his master’s in cinematography and film/video production at Brooklyn College. While studying at Hofstra University as an undergrad, Quentin’s short film Kill earned multiple awards and showed at the 2019 Buffalo International Film Festival.

Although it’s unclear who Guobadia shares sons Christian and Benjamin with, the two boys frequently travel the world in their dad’s private jet. “For fun, Christian at age 11 is building complex Lego sets for age 16+ with 6,000 pieces and up, leading me to believe he may be suited for an engineering or architectural program in the near future,” Simon wrote of his son on Instagram in July. “Benjamin on the other hand is very smart, and does not know it because we[‘re] still building his confidence level to express himself more when in fact he knows more than he is letting on.”

At three years old, Guobadia’s youngest daughter, Ximena, appeared with her mom Connie Andrade-Rivera in a Redbook fashion makeover package published in 2016. Andrade-Rivera, a plus-size model, credited her Latin heritage for teaching her to “embrace her curves from a young age” and said she hoped to instill that self-love in Ximena. “She’s multiracial with curly hair, and that will always set her apart,” Connie, who was 29 at the time, said of her and Guobadia’s daughter. “I just encourage her to be her.”

Guobadia appears to have an amicable relationship with Andrade-Rivera. In December 2018, for example, he shared that she and Ximena took him out to dinner to celebrate Christmas. Among the father-daughter duo’s favorite pastimes are spa days. “The fun part about fatherhood is when you can find activities you can share with your daughter,” he captioned an Instagram photo of them getting pedicures in June. “I think we found one.”