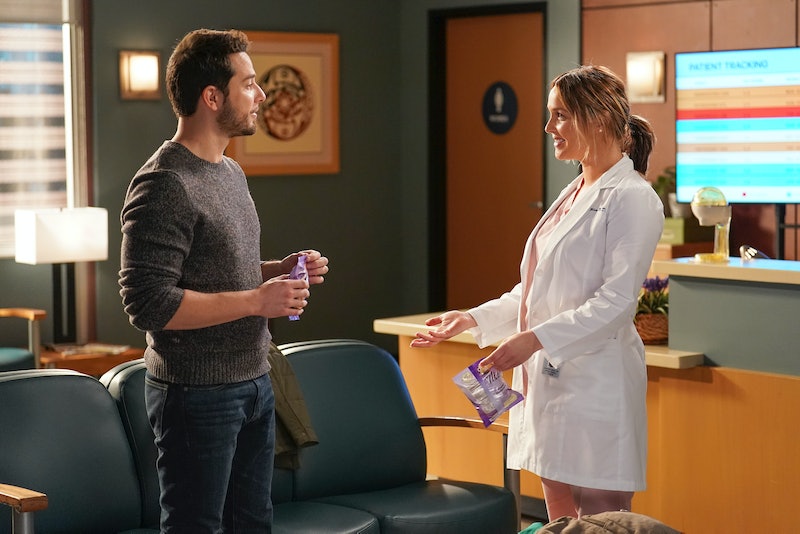 Spoilers ahead for Grey’s Anatomy Season 18, Episode 13. It didn’t take long for Grey’s Anatomy fans to begin shipping Jo and Skylar Astin’s new character Todd Eames. The two met while his sister Laurie, Jo’s pregnant patient, was in the hospital. In true sibling form, she made fun of her brother when he introduced himself as a doctor, clarifying that he “doesn’t save lives.” Todd does have a PhD in environment science though, and giving the first glimpse of his endearing personality, he announced, “I like data.”

He continued to charm Jo throughout the March 24 episode. While operating on Laurie, Jo told Maggie that she couldn’t see herself dating as a single mother to Luna, but after saving her patient’s life, she seemed to have a change of heart. During an adorable waiting room exchange — that even Camilla Luddington, who plays Jo, dubbed as “awkward” on Twitter — Jo asked Todd to get a drink with her at Joe’s — with an “e,” not to be confused with her name. “No comment on my skills of flirting...” Luddington also tweeted as the episode was airing.

Todd had his own cringeworthy moments, including when he assured Jo that he and Laurie aren’t “weird Game of Thrones siblings.” But he won Jo over after giving her a bag of salt and vinegar potato chips — something one fan noted was “literally sweeter than anything Nick has done [for Meredith] all season.” Suffice it to say, viewers saw a match made in Grey Sloan Heaven.

Right before Jo and Todd departed Grey Sloan for Joe’s, Link also extended Jo a drinks invitation, and the look on his face hinted there may be some lingering feelings to resolve. More than likely, Todd will serve as a means of making Link realize the extent of his feelings for Jo. Astin’s role is only billed as recurring, and he was recently cast to star opposite Geena Davis in an untitled CBS mother-son legal drama pilot, so he may not be around for long. But he’ll certainly be in several more episodes as he continues exploring his and Jo’s undeniable chemistry.

More like this
'GoT' Star Emilia Clarke Says She "Just Can't" Watch 'House Of The Dragon'
By Brad Witter
'RHOSLC' Star Jen Shah Refuses To Do A Post-Sentencing Interview With Andy Cohen
By Brad Witter and Jake Viswanath
Turns Out George Clooney Is A Huge Fan Of This Classic British Game Show
By El Hunt
Michael B. Jordan Tackled His "Public Breakup" With Lori Harvey On 'SNL'
By Brad Witter
Get Even More From Bustle — Sign Up For The Newsletter
From hair trends to relationship advice, our daily newsletter has everything you need to sound like a person who’s on TikTok, even if you aren’t.