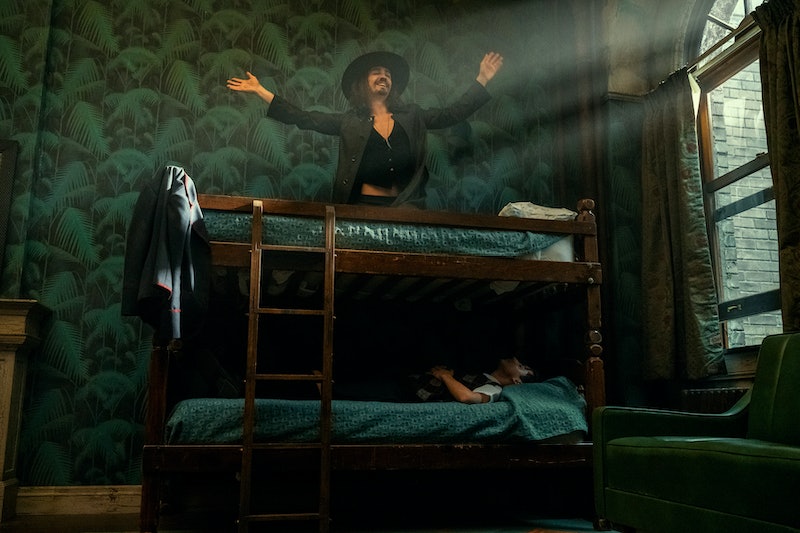 Ahead of Season 2, the series creator Steve Blackman told Parade. "Music is its own character on the show, and it's fun to counterpoint a song against a scene where they shouldn’t fit together but amazingly they do.” And Blackman is right. The smorgasbord of song choices shouldn’t work together on paper, but they do. Take Season 2, for instance; the soundtrack included Frank Sinatra, The Backstreet Boys, and My Chemical Romance’s Gerard Way. Should Everybody by the Backstreet Boys work as a backing to a knock-down-drag-out fight? Probably not, but the series’ commitment to its anachronistic music choices continues to succeed in Season 3.

Featuring songs from Kenny Loggins and Queen to Nelly and Jeremy Renner (yes, that Jeremy Renner), The Umbrella Academy Season 3 soundtrack is just as unpredictable as ever. Here is every classic and danceable track from each new episode.

“No More Heroes” by The Stranglers

“Let’s Go On A Hayride” by The McSharry Sisters

“The Passenger” by Iggy Pop

“Do You Believe In Magic” by The Lovin’ Spoonful

“Lady in Red” by Chris DeBurgh

“House of the Rising Sun” by The Animals

“House of the Rising Sun” by Jeremy Renner

“Crystalised” by The xx

“Into My Soul” by Gabin

“We’ll Get Through” by The Slugs

“I Gotta Cry” by Jeff Williamson

“Let’s Be Badder” by Lucern Raze

“Ride Wit Me” by Nelly

“Cat’s in the Cradle” by Ugly Kid Joe

“Another One Bites the Dust” by Queen

“What Makes You A Man” by The Ninth Wave

Episode 8 - “Wedding at the End of the World”

“Total Eclipse Of The Heart” (karaoke)

“Teenage Dream” by The Rescues

“Friday I’m In Love” by The Cure

“Short Change Hero” by The Heavy