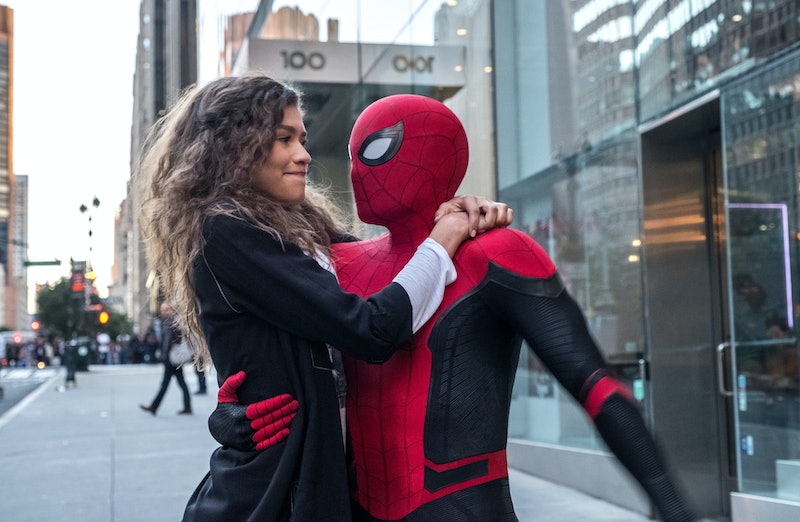 Spoilers ahead for Spider-Man: Far From Home. Spidey fans have come a long way. After that multi-channel trolling campaign from Tom Holland and his Spider-Man costars, Zendaya and Jacob Batalon all the way back in February (in which the famously spoiler-prone actor finally revealed the real title for the upcoming sequel), and a teaser released in August, we now have two (!) No Way Home trailers — and they’re equal parts exciting and terrifying.

A brief refresher: As announced via video Instagram posts to both the Spider-Man movie account and Tom Holland's own, the new film is titled Spider-Man: No Way Home. In a low-key video, posted on Feb. 24, Holland, Zendaya, and Batalon convene outside director Jon Watts' office. Holland tells his friends, "He gave us a fake name again," a nod to the trio each posting a different "official" title for the movie the day before. (Sending love to those who really wanted the title to be "Home-Wrecker," "Home Slice," or "Phone Home.") "I just don't understand why he keeps doing this," Holland continues in the video, though his friends are not surprised: Holland is notorious for spilling secrets about the projects he's on.

But as the group walks out of the main office, they unwittingly pass by a whiteboard cluttered with countless hilarious home-related titles riffing on the previous Homecoming and Far From Home movies. There are even some pandemic nods with "Work From Home" and "Homeschooled" scribbled on the board. In the middle of them all, though, was the true name: No Way Home.

The clip ends with a swell of Spidey music and the note, "Only in theaters this Christmas."

Though the announcement clip was short, fans had plenty of exciting information to think about (and theorize over) in the months that followed. Here is everything we know about Spider-Man: No Way Home so far.

The Spider-Man: No Way Home Cast

One of the most exciting aspects of No Way Home is the star-studded cast — not even counting Holland, Zendaya, and co. In December, The Hollywood Reporter announced that fan-favorite Alfred Molina (aka Doc Ock from 2002's Spider-Man 2) would be appearing in the upcoming sequel — and as the teaser confirmed, the fan-favorite villain will indeed be back. The outlet also confirmed that Jamie Foxx would reprise his role as Electro from 2014's The Amazing Spider-Man 2 and Benedict Cumberbatch as Doctor Strange would star as well — this time as a friendly advisor to Peter, who helps him in his quest to deal with that Far From Home fallout. Benedict Wong returned as Wong, too, warning Strange against his schemes (but more on that later).

According to a Collider report, Andrew Garfield and Kirsten Dunst would be back as well, and that Tobey Maguire and Emma Stone would likely follow suit, but none of the actors have confirmed their return. “No matter how I answer, I’m damned if I do, damned if I don’t,” Garfield told Bustle this November. “So in essence, you’ll just have to wait and see.”

Naturally, because of the ambitious nature of the project, details are very, very under wraps. On a Feb. 23 appearance on The Tonight Show with Jimmy Fallon, Holland carefully responded to those potential Peter Parker return rumors, saying, "It would be amazing if they were because they haven't told me that yet," he said. "And I am Spider-Man, and I've read the script from the beginning to the end, so it will be a miracle if they could've kept that from me."

When Fallon suggested that maybe he doesn't know because he's prone to spoilers, Holland jokingly responded, "It actually is getting to the point where it's really frustrating, because I feel like now I've progressed." He added, "I'm a trustworthy member of the Avengers, and I haven't really ever spoiled anything. Well, there's a few things, but no big things. We'll leave it at that."

In a May 17 interview with Collider, actor Angourie Rice (who plays Betty Brant in the films) spoke about returning for Spider-Man: No Way Home and detailed the intense secrecy that comes with working for Marvel:

“The way that, like, Marvel protects the story is beyond anything I’ve ever experienced. It’s so secret. Shooting Spider-Man was like getting to go to a really cool theme park, but you couldn’t tell anyone because it’s the world’s most secret theme park. That was tricky. The good thing about the second film was that I had my mother and my sister there with me the whole time, so they were in on it and I could talk to them about anything because they were there. They are super secretive about everything. After being a part of it and seeing how people speculate from photos online and single lines in previous films, the fans of Marvel do some really great guesswork, for sure, so I understand.”

Spider-Man, famously, has several film series adaptations — the first with Maguire, Dunst, Molina, and Simmons; the second with Garfield, Stone, and Foxx; the third, of course, starring Holland and Zendaya. So how could this next installment get away with having all of these heroes and foes on one screen?

From the start, fans pointed toward the Multiverse, a concept connecting multiple worlds earlier touched on in Far From Home. If there's a connection between characters from different worlds in No Way Home, it could explore some of the same implications of WandaVision, Loki (hello, variants!), and the upcoming Doctor Strange in the Multiverse of Madness movie. Observant viewers will also notice that the shot of Strange performing the spell for Peter looked extremely similar to the Multiverse landscape explored in the season finale of Loki, further confirming the connection.

To add more fuel to the fire, Twitter user Simon Moore (@simonmoore2110) posted screenshots of since-deleted alleged Instagram posts from William Spencer (@iwilliamspencer), aka Garfield’s stunt double from The Amazing Spider-Man movies, that reveal his presence on a film set with Greg Townley (@gregtownley) — Holland’s Spider-Man stunt double. While the posts are by no means an official confirmation of Garfield’s involvement in the film, they’re certainly keeping these fan theories alive.

Before the first teaser trailer came out in August, viewers only knew they’d see Peter Parker dealing with the fallout of Far From Home. In a mid-credits scene, it was revealed that Peter was being framed for the murder of Jake Gyllenhaal's Mysterio, who actually recorded himself revealing Spider-Man's true identity.

However, once the No Way Home trailer was released on Aug. 23 after someone leaked an unedited version online and sent the fandom into utter chaos, it became clear that the movie would center around a spell Doctor Strange cast to make people forget Spider-Man’s identity. Of course, that had Multiversal implications.

So whether the No Way Home title refers to Peter going on the run to protect himself and his family, or, on a grander scale, he's somehow prevented from getting to his home universe, it's an ominous sign of the high stakes Spidey is up against.

Then, on Nov. 16, the official trailer debuted and addressed a few key questions. As Strange explains, the various villains entered the MCU Peter Parker’s world after his botched spell — and “they all die fighting Spider-Man. It’s their fate.” Peter, of course, does not seem down to let these strangers die, especially since they’ve never personally wronged him.

The official trailer also teased sweet (and suspenseful) moments between Peter and MJ. Peter reveals that the only time he’s ever felt normal after his spider bite was when MJ found out he was Spidey. But the trailer ends with MJ falling and Peter trying to catch her in a scene way too reminiscent of Gwen Stacy’s fall in The Amazing Spider-Man 2 which, well, didn’t work out great.

Spider-Man: No Way Home will premiere on Dec. 17.

How To Watch Spider-Man: No Way Home

As the official trailer reiterated, Spider-Man: No Way Home will premiere “exclusively in theaters,” so you won’t be able to watch from home — at least, not for a while. (Shang-Chi, for example, hit Disney+ two months after its theatrical premiere.)