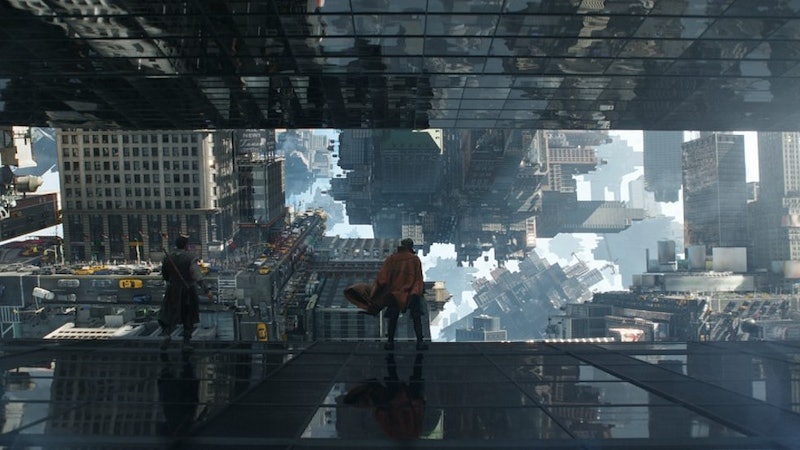 Things are getting weird over at Marvel, in a good way. Kevin Feige unveiled the MCU's upcoming film slate at Comic-Con, and there were a few fun surprises. One of the most intriguing was the bonkers title of the Doctor Strange sequel, Doctor Strange in the Multiverse of Madness. But what is the Multiverse of Madness? In the first Doctor Strange film, other dimensions were confirmed to exist, and they played a significant role in that movie's plot. But the multiverse, in Marvel Comics lore, is something else entirely. So just what is this out-there title really about?

First things first, there is nothing known as the "Multiverse of Madness" in Marvel Comics, so as far as the title's origins are concerned, it didn't come from comic books. With director Scott Derrickson revealing that the Doctor Strange sequel will be the MCU's first horror film, some fans and pundits have theorized that the title of the film was inspired by horror icon H.P. Lovecraft's story At the Mountains of Madness. Doctor Strange comics do have a number of cosmic villains that could be described as Lovecraftian, with the most obvious being the one-eyed, tentacled demon known as Shuma-Gorath. An ancient interdimensional being, Marvel refers to Shuma-Gorath as one of the "Old Ones," and it is on a similar power level to the villain of the first Doctor Strange film, Dormammu.

With possible nods to Lovecraft covering the "Madness" portion of the film's title, there is still the issue of the "Multiverse" in the Doctor Strange sequel. Marvel Comics have long featured what's known as the multiverse. Essentially, it is the existence of infinite parallel universes. A lot of scientists believe we may actually be living in a multiverse, but in the comics, these universes frequently interact with one another. The universe in which the majority of Marvel Comics continuity takes place is referred to as Earth-616, but there are dozens of others that have been revealed over the years. The most notable is arguably the Ultimate Universe, Earth-1610. This universe is the original home of Miles Morales, who has since moved up to the varsity leagues in 616 thanks to his enormous popularity.

So what purpose will the multiverse serve in the MCU? For starters, it will likely make for some pretty trippy shenanigans in the Doctor Strange sequel. But beyond that, on a larger scale, it may be used to introduce significant new characters to the MCU. With Disney now owning Fox, that means the X-Men and Fantastic Four are finally eligible to appear in the MCU. And since they're such established characters — the X-Men especially, since they require mutants to already exist all over the world — the most sensical way to introduce them to the MCU may be by having them hail from another universe, and then somehow enter the universe of the MCU (which is designated Earth-199999, btw).

However the Doctor Strange sequel makes use of its title, whether it's through introducing the multiverse, featuring Lovecraftian horrors, or a combination of both, you've got to admit that Doctor Strange in the Multiverse of Madness is one awesome title for a movie that embodies the envelope-pushing style we should expect from the MCU in Phase 4.

More like this
Wait, Did Wanda Die In 'Doctor Strange And The Multiverse Of Madness'?
By Arya Roshanian
Elizabeth Olsen Is Better Off Without Us
By Chloe Foussianes
Who Are The 6 Illuminati Heroes in 'Doctor Strange 2'?
By Grace Wehniainen
Jamie Lee Curtis Ignites Instagram Feud With Marvel’s 'Doctor Strange' Sequel
By Sam Ramsden
Get Even More From Bustle — Sign Up For The Newsletter