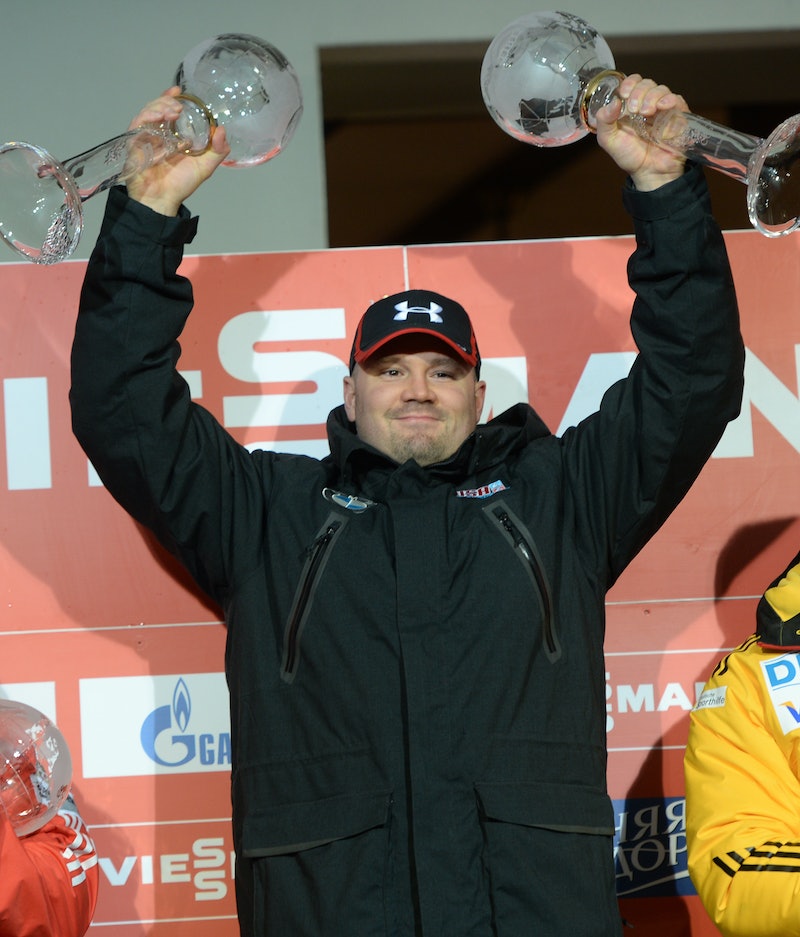 We should be in the middle of watching the 2020 Summer Olympics in Tokyo right now, cheering on a new generation of American athletes. Instead, the coronavirus pandemic has caused the games to be delayed for the first time ever, and they're now set to take place in the summer of 2021. Still, the Olympics are getting some renewed attention this summer thanks to veteran sports filmmaker Brett Rapkin's new HBO documentary The Weight of Gold (out July 29). But it's not the typical inspiring stories the media tends to highlight during the games. Instead, the film focuses on the severe mental health issues that many Olympians face. And the late athlete Steven Holcomb's appearance in The Weight of Gold — whose death inspired Rapkin to focus the documentary on the mental health of Olympians — serves as a reminder of a talent gone too soon.

Holcomb represented the US bobsled team at three consecutive winter games: the 2006 Winter Olympics in Turin, Italy; the 2010 Winter Olympics in Vancouver, Canada (where he led Team USA to the gold medal in the four-man bobsled event); and the 2014 Winter Olympics in Sochi, Russia. Over the course of his career, Holcomb won a total of three Olympic medals and also had tremendous success at various professional world championships. By all appearances, he was a highly successful athlete; someone who had reached the peak of his profession. But Holcomb struggled with depression, especially after a diagnosis of the eye disorder keratoconus threatened his vision in the lead-up to the 2010 Olympics. Holcomb's depression eventually led to him seriously considering death by suicide, an event which he spoke openly about in The Weight of Gold and in his 2012 memoir, But Now I See: My Journey from Blindness to Olympic Gold.

Trailer for HBO's 'The Weight of Gold'

In The Weight of Gold, Holcomb appears several times throughout the first three-quarters of the film. Alongside fellow Olympic gold medalists like Michael Phelps and Lolo Jones, Holcomb and the rest of the athletes frankly discuss their issues with mental health, depression, and thoughts of suicide. But near the end of the documentary, it is revealed that Holcomb died in 2017. He was discovered in his hotel room by fellow winter Olympian and best friend Katie Uhlaender while they were training for the 2018 games at the Olympic Training Center in Lake Placid, New York.

Holcomb died due to a lethal combination of alcohol and sleeping pills, and though it is unknown if this was an accidental death or a death by suicide, the point remains that Olympic athletes need more support in dealing with their mental health struggles. And that is the main message of The Weight of Gold. As Phelps puts it near the end of the film, "What else has to happen for this to change? ... Do five other athletes have to [die by suicide] to see change? How far down the road are we going to get before somebody stands up and says, 'We have to do something.'"