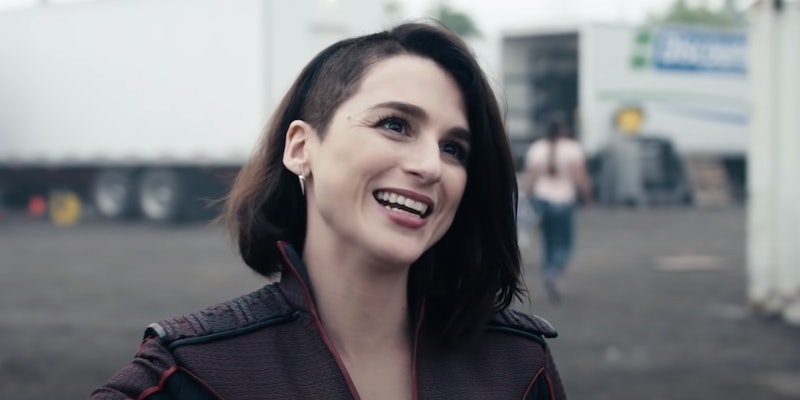 Even though it's called The Boys, fans of Amazon's superheroes vs. vigilantes series know that some of its most compelling characters are women. That includes Aya Cash's Boys character Stormfront, who is set to shake things up in a big way with her arrival in Season 2. And going off of the version of Stormfront in The Boys comics, it would appear that Cash's character is primed to be a particularly effective new villain in a show where practically every character is a bad guy.

Cash's Stormfront is a supe from Portland, Oregon, who becomes the newest member of The Seven, replacing the deceased Translucent. As the Season 2 trailer shows, Stormfront plans on building a millions-strong army of superheroes to essentially take over the world, doing so under the guise that she is protecting society from terrorists and vigilantes. Obviously, this makes her a major antagonist of The Boys, but they're not the only group whose skin she'll be getting under. She is also a villain to her colleagues in The Seven, especially their leader Homelander, who feels threatened by a powerful woman stealing his thunder (literally, thanks to her lightning powers).

In The Boys comics, Stormfront is a man. The series decided to gender-swap the character for two reasons, according to showrunner Eric Kripke. "One is we wanted to sort of create Homelander's worst nightmare, and his worst nightmare would be a strong woman who wasn't afraid of him and proceeded to steal his spotlight. I think that would hurt him way more than if it were a male character, because he has a gaping hole of insecurity," Kripke said at the series' TCA panel, per CinemaBlend. "And, two ... she has certain hateful ideologies, I would say. And the truth is, there's a lot of hate and negative thought these days, if you look online, that is packaged in really slick social media attractive ways. It’s not like old dudes with crewcuts in the 1960s newsreels anymore. It's very real and slick and charming young people who are trying to hook in a new generation, and we sort of wanted to reflect how insidious that is." Think of Stormfront as the Tomi Lahren of evil, manipulative superheroes.

As for what hateful ideologies Stormfront espouses, the comics may offer some clues. The Stormfront of the comics is a literal Nazi: He was created by the Nazis during WWII using Compound V in an effort to create a supersoldier (kind of like a reverse Captain America), and was actually the first successful recipient of the superhero-creating chemical. He later made his way to the U.S., where his DNA was used by Vought to create Homelander. As a result of his lineage, he is extremely powerful, with the abilities of flight, super-strength, and control over lightning and electricity. He's also not a member of the Seven in the comics, but rather is the leader of another group of supes called Payback. He eventually meets his demise at the hand of The Boys.

It's clear that the show's Stormfront will be quite different from the comic book version of the character. By turning an old Nazi into a young social media-savvy woman, the series has given an appropriately modern update to one of The Boys' most evil villains.

More like this
'The Rings Of Power' Episode 5 May See The Realms Brought Together
By Kadin Burnett
Nicola Coughlan Shared A Lady Whistledown Excerpt From ‘Bridgerton’ Season 3
By Grace Wehniainen, Alyssa Lapid and Sam Ramsden
The 'Andor' Timeline, Explained
By Gretchen Smail
Alicent's Green Dress In 'House Of The Dragon' May Be An Act Of War
By Kadin Burnett
Get Even More From Bustle — Sign Up For The Newsletter