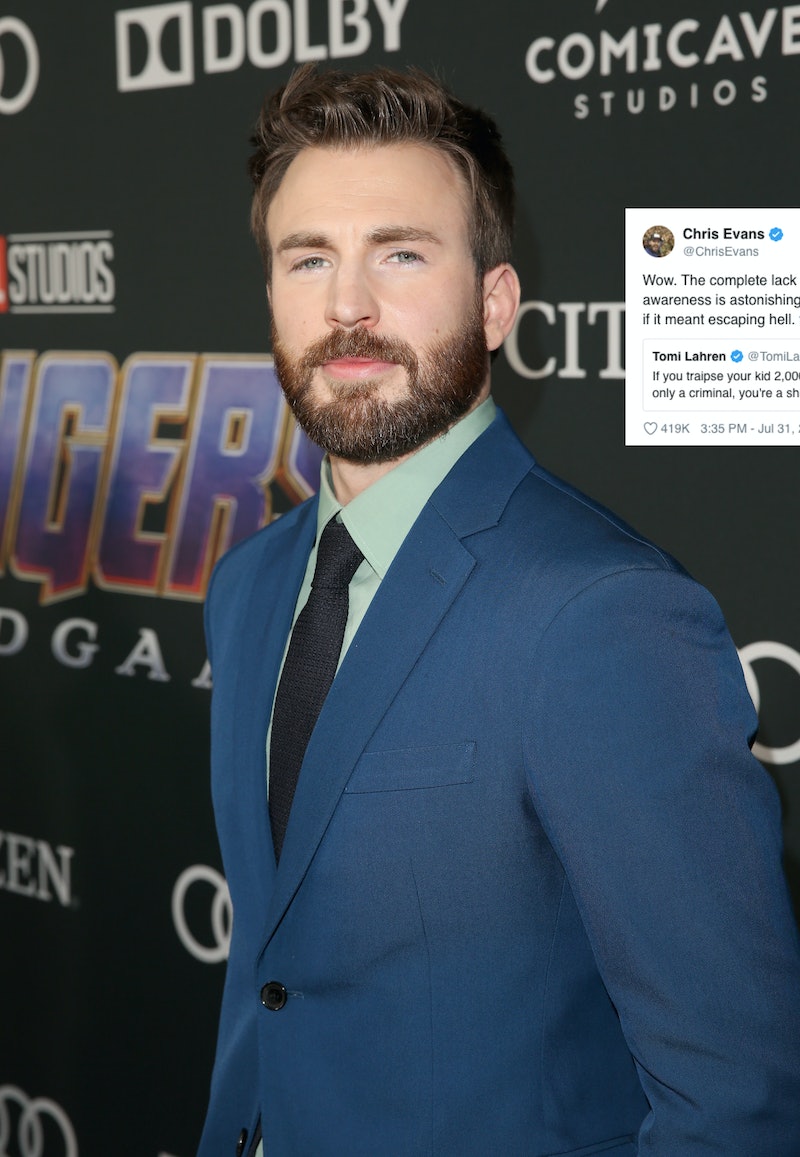 He may have hung up Captain America's shield, but Chris Evans' response to Tomi Lahren's immigration tweet was downright heroic. During the Fox Nation host's live-tweeting of CNN's July 30 Democratic presidential debate, Lahren wrote, "If you traipse your kid 2,000 miles in dangerous conditions you're not only a criminal, you're a sh*tty parent." Evans had his own final thoughts on the matter.

"Wow. The complete lack of sympathy, respect, and general awareness is astonishing," Evans tweeted the next day. "Also, I would carry my kid through fire if it meant escaping hell."

The part of the debate to which Lahren — who's famously clashed with several celebrities, like Cardi B and Nicki Minaj on social media — was likely referencing came during Senator Bernie Sanders' immigration discussion. According to Sanders, "what Trump is doing through his racism and his xenophobia, is demonizing a group of people." If elected POTUS, he said, his goal would be to end that demonization.

"If a mother and a child walk thousands of miles on a dangerous path, in my view, they are not criminals," Sanders argued during the debate in Detroit, per NBC News' transcript. "They are people fleeing violence."

In his remarks, Sanders also referenced earlier comments from former Congressman Beto O'Rourke, who said, as president, he'd work with "countries in Central America so that no family ever has to make that 2,000-mile journey."

The issue of immigration has, of course, dominated the news cycle in recent months, following the widely reported crisis at the United States' southern border. In mid-June, Customs and Border Protection released video of a Texas detention facility where kids were being held in what looked appeared to be cages. Later, in an Associated Press report, lawyers claimed that migrant children are being detained in "inhumane" conditions at a Texas border facility. As they described, the kids were reportedly given uncooked frozen food to eat, had gone weeks without being given the opportunity to bathe or change clothes, and had been denied medical attention.

Evans had expressed his views on immigration long before those images hit the news, however. Last June, Evans responded to a Washington Post opinion piece that claimed "stoking racial tensions is a feature of Trump’s presidency."

Evans re-posted the article with this comment: "His effort to dehumanize immigrants is appallingly clear. He stokes fear and anger effectively pandering to the bigoted and uninformed. The entire GOP is complicit in this pernicious reincarnation of history’s ugliest chapters. Their silence is deafening and will not be forgotten"

A longtime Trump critic, Evans has put fighting for what he believes in above his worry over a paycheck. "Look, I'm in a business where you've got to sell tickets," he told Esquire in 2017. "But, my God, I would not be able to look at myself in the mirror if I felt strongly about something and didn't speak up. I think it's about how you speak up. We're allowed to disagree. If I state my case and people don't want to go see my movies as a result, I'm okay with that."

Like Evans, many other celebrities have spoken out on the issue. On July 20, Justin Bieber tweeted Trump asking him to "let those kids out of cages." Weeks earlier, Bieber's ex Selena Gomez addressed the border crisis and encouraged her fans to lend their support. As Gomez captioned impassioned June 29 Instagram post:

Evans effort to put a spotlight on common immigration misconceptions is one that will keep his followers out of the dark.

More like this
Chris Evans Had The Best Reaction To Seeing Ana de Armas As Marilyn Monroe
By Radhika Menon
Dixie D’Amelio & Noah Beck “Love Each Other” Despite Breakup Rumors
By Julia Emmanuele, Jordyn Tilchen and Grace Wehniainen
Victoria Beckham Loves Teasing David About His “Sticky” New Hobby
By Sam Ramsden
Kourtney Kardashian Claps Back At Pregnancy Speculation On Instagram
By Jake Viswanath
Get Even More From Bustle — Sign Up For The Newsletter