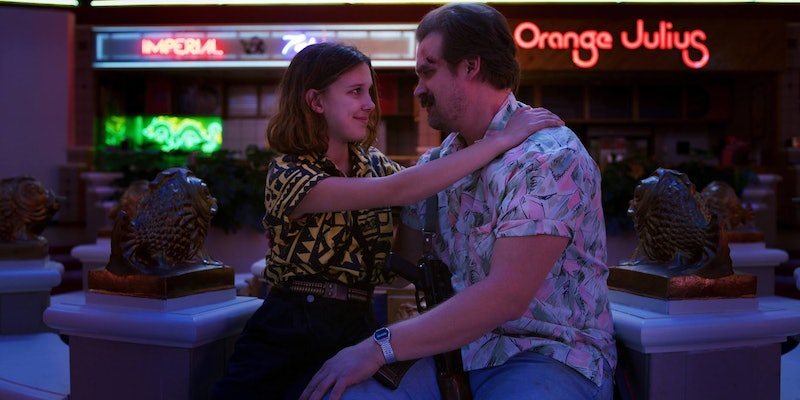 New episodes of Stranger Things haven't been released since the last decade thanks to coronavirus. And, given that productions are still struggling to figure out how to get back to work safely, who knows when we'll get to see Hawkins again. So, to hold you over until the fourth season does premiere, let's go over everything we know about Stranger Things Season 4 so far.

Before getting into the nitty-gritty, it's important to point out that Season 4 is going to have a different feel than Season 3, which had a brighter tone thanks to its summer of '85 setting. "We're pretty excited about where it's potentially going to go," co-showrunner Ross Duffer told Entertainment Weekly in July 2019. "It's going to feel very different than this season. But I think that's the right thing to do and I think it'll be exciting."

It's unclear exactly what Ross means by that, but according to Joe Keery (aka Steve Harrington), fans better expect more intense scares. "Oh man, it’s pretty amazing — the Duffer brothers have really done it again," he said about Season 4 in an interview with Total Film Magazine published in April. "I think that this year — and I know I say this every single year — but this is definitely going to be a lot scarier than prior years, because last year was pretty dark."

When Does Stranger Things Season 4 Premiere?

At this time, there isn't a definitive Season 4 premiere date, especially because production had to be shut down in March due to coronavirus concerns. Star David Harbour told Deadline (via TVLine) in June that filming was underway for "a couple of weeks" and they weren't sure when production would resume. "We don’t really know what the future holds," Harbour said. "I don’t feel like anybody knows. We’re all playing it by ear. We want to get up and running as soon as possible." The Hollywood Reporter claimed that production was tentatively slated to resume on Sept. 17, but the Duffer brothers told THR in August that everything was still up in the air. "Everyone's excited to get back to work, but the priority is the safety of the cast and crew, and that will dictate when we go back."

That said, the scripts are, according to the Stranger Things writers Twitter account, all complete, so it really is just a matter of when.

So far, it looks like everyone from the main cast is returning, including scene-stealer Priah Ferguson (Lucas' younger sister Erica), Maya Hawke (Robin), and Brett Gelman (Murray Bauman), who were all upped to series regulars for Season 4. Plus, TVLine reported in October of 2019 that four new male characters will show up in recurring roles. Three are teenagers (a jock, a metalhead, and a Valley boy) and one is an adult, who is said to have an important role set far away from Hawkins.

Despite what appeared to have been Hopper's heartbreaking death at the end of Season 3, he definitely isn't dead. As shown in the Season 4 teaser released in February, Hopper (Harbour) is very much alive, but stuck inside a Russian prison (Kamchatka), where a demogorgon also resides. In March, Harbour teased that Hopper's past would play a major role in Season 4 during an appearance at Comic Con Liverpool.

Per Harbour, there is going to be a "big huge reveal" about his character. "It's one of the things that I've known since the first frame of the first shot, and we haven't expressed it yet, and finally we're going to express it in a big way," he teased. "It's my favorite thing about him that you guys don't know about him yet. But it has to do with these backstories of New York, Vietnam, and Dad."

What Mysteries Are Ahead?

We never know what Stranger Things truly has in store, but apparently there's some type of "new horror" lingering in the darkness. In a statement released by the Duffer brothers in February (via IndieWire), they teased that in the states "a new horror is beginning to surface, something long buried, something that connects everything." They also noted, "Season 4 is shaping up to be the biggest and most frightening season yet, and we cannot wait for everyone to see more."

Will Season 4 Be In Hawkins?

It looks like Hawkins might be a thing of the past for these kids. First, at the end of Season 3, Joyce, Will, Jonathan, and a now "orphaned" Eleven moved out of Hawkins, Indiana. A Season 4 renewal announcement later appeared confirmed that the show would be changing locations, teasing, "We're not in Hawkins anymore." And, finally, the images of Hopper in Russia are pretty hard to deny.

Furthermore, in March, it was reported that part of the fourth season would be filmed in New Mexico, rather than the show's usual filming location in Atlanta. "Season 4 is bigger, bolder and more intricate than ever," Netflix VP of Physical Production Momita SenGupta told Deadline at the time. "So this is the first time the show will be traveling beyond Atlanta." What we also know is that Matt Duffer told Entertainment Weekly in July 2019 about Season 4, "It's going to open up a little bit, not necessarily in terms of scale, in terms of special effects, but open up in terms of allowing plot lines into areas outside of Hawkins."

What this means for Lucas, Dustin, Nancy, Steve, and Robin, who are all still in Hawkins, remains unknown.

Will Eleven Get Her Powers Back?

After using all her strength to defeat the Mind Flayer in Season 3, Eleven lost her powers, and she still hadn't gotten them back by the time she left Hawkins. But, the title of Season 4's first episode might hint at her regaining her superpowers — with horrible consequences. The fourth season premiere is titled, "Chapter One: The Hellfire Club," which, according to CNET, this refers to a group of villains that fought against the X-Men and helped unleash the Dark Phoenix, aka the dark side of Jean Grey who was also known for her telepathic and telekinetic powers. This title could hint that Eleven might go dark in Season 4, especially since she thinks Hopper, her dad (he adopted her at the end of Season 2), is dead.

What's Going On With Nancy & Jonathan?

Now that Jonathan and his family have moved away, who knows if Nancy and Jonathan will last as a couple. Actor Natalia Dyer opened about her character Nancy's trajectory in Season 4 in a 2019 interview with Elle, "I feel like long-distance is hard nowadays, so imagine long-distance relationships back then." She added, "I'd love to see if her and Steve would ever get back together, or at least if they get closure. Will their chapter ever close? I'm very curious. Also, I want her to get a female friend. RIP Barb."

According to co-creator Ross, Stranger Things will go past Season 4. "Season four won’t be the end. We know what the end is, and we know when it is," he told The Hollywood Reporter in August. "[The coronavirus pandemic] has given us time to look ahead, figure out what is best for the show. Starting to fill that out gave us a better idea of how long we need to tell that story." According to TVLine, Ross didn't reveal how long the series will continue and a Netflix rep declined to comment.

That's all we know so far, but we'll be sure to update you as more Stranger Things Season 4 details are announced.