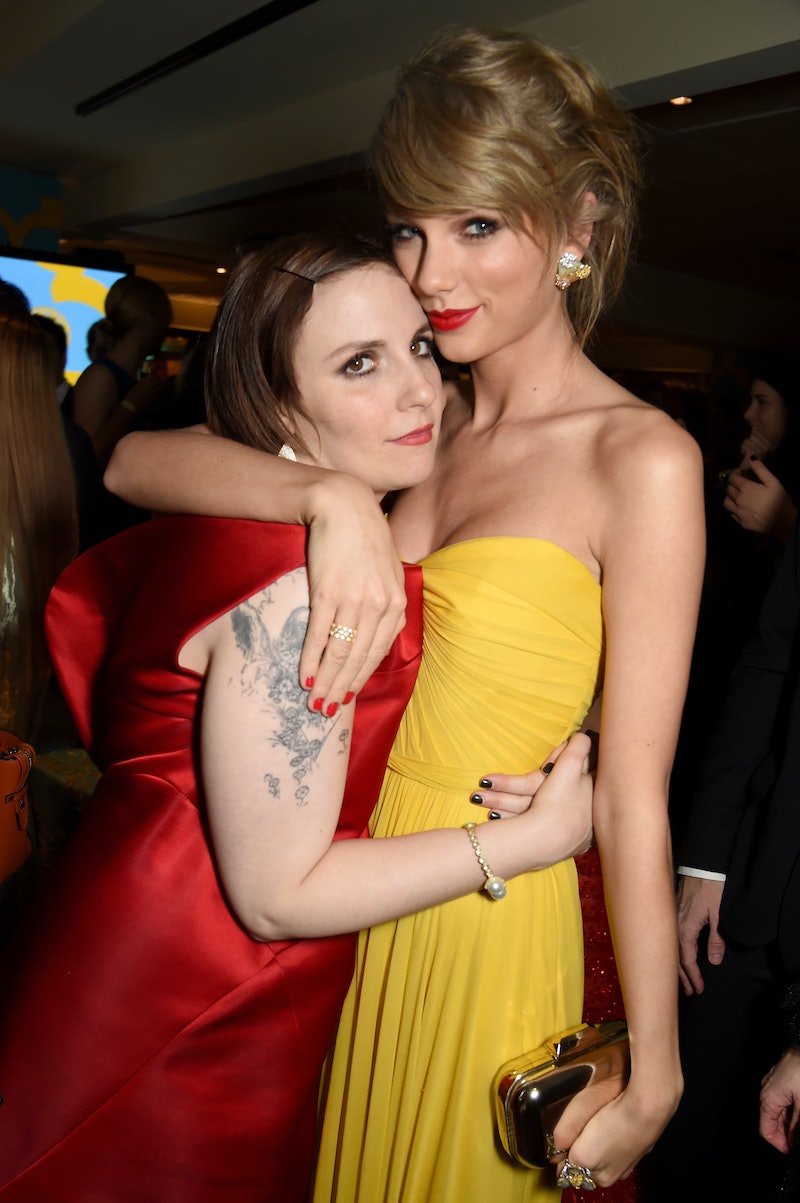 Less than a year after Lena Dunham revealed that she was in a new relationship, the Girls creator is now a married woman. Over the weekend of Sept. 24-26, the TV writer and actor tied the knot with 35-year-old musician Luis Felber (stage name: Attawalpa) at Soho’s Union Club in London. According to Vogue, the newlyweds were surrounded by 60 of their closest friends and family while others tuned in via Zoom due to COVID-19. Dunham, 35, reportedly had a total of eight bridesmaids — and yes, her longtime friend Taylor Swift was one of them.

In a carousel of photos from the wedding that were shared on Vogue’s Instagram, the “Cardigan” singer is seen holding up a drink while mingling with comedian Jerrod Carmichael and fellow bridesmaid Tommy Dorfman. Swift and Dorfman were wearing matching, ‘60s-inspired metallic dresses. “With the bridesmaid dresses, we were doing a kind of Swinging Sixties, silver pleated, go-go girl energy, but one of my bridesmaids put it best when she said she felt like ‘a beautiful cupcake wrapper,’” Dunham told the magazine.

Shortly after the magazine shared the photos, Swifties flooded Twitter with messages of love, admiration, and jealousy. “If Taylor was my bridesmaid I would simply drop everything and marry HER,” Twitter user @bkobinmyblood wrote. “I want Taylor to be a bridesmaid at my wedding,” @taysbaybeh added. “Is is it too much to ask for?” Several other fans weighed in as well, with many expressing concern over Dunham’s controversial past.

So far, Swift hasn’t shared anything on social media about Dunham’s big day, and she may never. Despite being close friends since 2015, Swift and Dunham are rarely spotted together. However, Dunham has a long history of publicly supporting the pop star. In 2020, she tweeted about how much she loved Folklore. In 2017, she spoke to Howard Stern about the singer’s dating life. “It’s so hard,” she said. “I think about the relationships that I had in my early twenties and if they had been public, it would’ve been a disaster.”

“Not to repeat age-old feminist points, but it’s like, you know, any male actor her age who’s going out and dating is applauded,” Dunham continued. “To just have a perfectly normal amount of romantic partners but be held to impossibly high standards by the press. Like, it’s just an unfair and unwinnable game.” Swift, of course, is now in a committed relationship with actor Joe Alwyn and has been since 2016. And considering Alwyn is set to star in Dunham’s directorial venture, Catherine, Called Birdy, he clearly has her stamp of approval.

Swift and Alwyn have been the subject of many marriage rumors, but when their big day does come, perhaps Swift will look to Dunham for some wedding day pointers. “You can have a far bigger wedding with less bridesmaids,” Dunham told Vogue, explaining that she really wanted all of her closest friends by her side as she and Felber exchanged their vows. “I guess it just speaks to how excited I was to have my close friends there.”

The Girls star also told the magazine that after more than a year of the COVID-19 pandemic, she and her friends needed something to celebrate. “I spent so much time during the pandemic talking to my girlfriends about our feelings over FaceTime, but a few of my best friends I haven’t seen in over a year,” she said. “You know, my girlfriends have had to deal with a lot of not-so-happy things with me in our adulthood, so to be able to celebrate something joyful and use it as an excuse to be together was very special.”