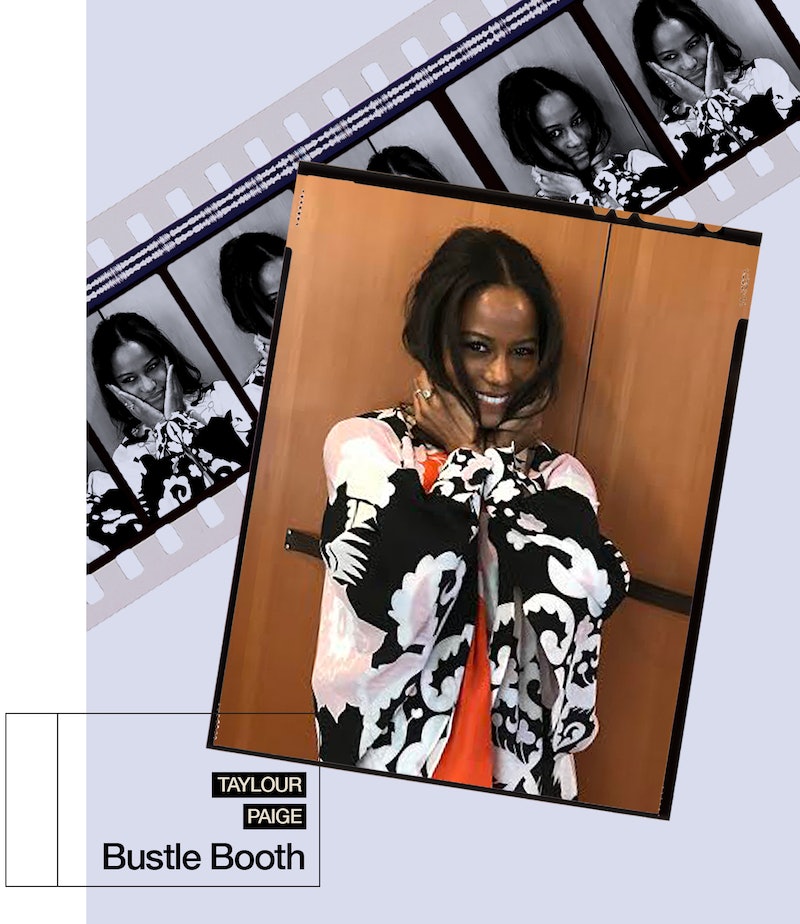 While most of us spent 2020 slowing down, Taylour Paige's star was exploding. At the top of the year she played the eponymous lead in one of the most buzzed about movies of the Sundance Film Festival: A24's Zola, which will hit theaters in June. The film — based on the viral 148-tweet thread by Aziah “Zola” Wells from 2015 about a trip to Florida that becomes laced with sex trafficking and murder — made waves for its unorthodox source material, its unrepentant portrait of prostitution, and, of course, Paige's electrifying performance.

The strength of Paige's work in Zola is her commitment to bringing a sense of empathy and complexity to a person who was largely meme-ified half a decade ago. “Though [that Twitter thread] is funny and there are these one-liners that are clickbait-y, this is actually the way [Zola was] processing trauma,” Paige tells Bustle. “Our movie exists in hyperbole, but the weight of it is [rooted in] sex trafficking and toxic masculinity and racism.”

This interest in the compassion and humanity of others has since become a driving force for the 30-year-old actor, both in terms of how she looks at her craft and the projects she gravitates towards. It's on display in her latest film, the new adaptation of August Wilson’s acclaimed play Ma Rainey’s Black Bottom, where she co-stars as Dussie Mae, a singer struggling to put her own needs first while in the shadows of the larger personalities around her. The movie takes place over a single afternoon in 1920s Chicago, where legendary blues singer Ma Rainey (Viola Davis) and her band are at odds with producers who are trying to control her music. Dussie Mae’s allegiances are tested throughout the film: She’s Ma Rainey’s lover as well as the object of trumpeter Levee’s (Chadwick Boseman) affections.

“I think [Dussie’s] auditioning for her worth,” Paige explains about her character’s attempts to break free from her romantic entanglements and showcase her own musical talent. “I’ve felt that before. She wants to be free, she wants some window of possibility. I’ve felt that before, too.”

While Ma Rainey’s Black Bottom is Paige’s introduction to the world of awards season films (it's already getting Oscar buzz), it’s also the final release for revered actor Chadwick Boseman, who died in August at the age of 43 from colon cancer. Paige’s Dussie Mae and Boseman’s Levee spend much of the film exchanging flirty glances before finally getting one sexually charged and physically intimate moment alone. “He was present, he was honest as Levee, he was super respectful,” she says of acting alongside Boseman. “I felt like he was such an old soul, but in being [an] old [soul], you have the availability to your child-like sensibilities. I think Levee and Dussie are very much those inner children still looking for something. I felt safe to explore that with him.” And because of Boseman, it's a side that Paige will continue to explore, bringing a true sense of compassion to all her characters to come.

Get to know more about Paige — including her love of Dave Chappelle — in her Bustle Booth questionnaire below.

Haha, I don't have any locations saved!

I am really enjoying [the] new season of Fargo and thoroughly enjoyed discovering the film Swallow.

I don’t really have any idols, but it deeply infuriates me that I will never be able to physically have dinner with Toni Morrison, Maya Angelou, August Wilson, or James Baldwin. I would love to sit down with Dave Chappelle, though. My man Jesse [Williams] is pretty legit, too.

Something to do with fixing up a house or helping someone with their hoarding.

“I Say A Little Prayer For You” by Aretha Franklin.

A course in miracles.

I would wish for people to say that they feel joy and peace, and hopeful when they are around me; to feel nurtured and felt, and a little less alone. That I was always kind, made them laugh, and encouraged them to relax and breathe.