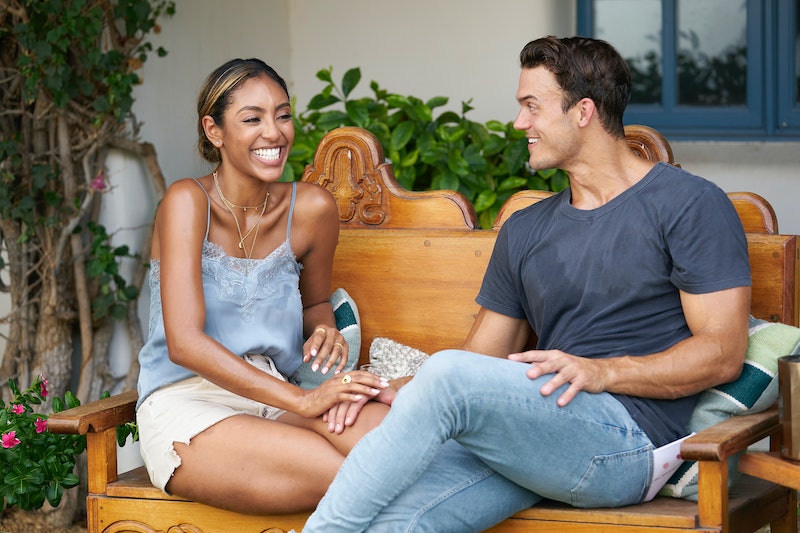 It may have been difficult for Tayshia Adams to relive her most recent Bachelorette breakup when the episode aired on Dec. 15, but she stands by her difficult decision. While speaking about her hometown dates on her Click Bait podcast, Tayshia revealed she doesn't regret sending Ben home on The Bachelorette — and even weighed in on the rumors that he made a dramatic return to La Quinta.

The Bachelorette explained that she's been having a difficult time reliving all of her dates and breakups as they air on TV. "All I have to say [is] these Bachelorette episodes, have me feeling some type of way," Tayshia told her cohost Joe Amabile on the Dec. 17 podcast episode. "It's very emotional watching these things back, and reliving these feelings. I may have taken one too many shots, or drank a little bit too much wine, I don't really know. I was definitely in my feels."

Tayshia had a particularly hard time reliving her awkward final conversation with Ben after she didn't give him a rose. "I remember those feelings at the time, when I was just sitting on the bench and I was like, 'Show me something. Do you care at all about me? Is this meaningful towards you? Is this just how you treat every girl?' I just needed a little sense of validation and I didn't have any of that," she explained.

She continued, "I felt like, I was hoping that him seeing his family would be what he needed in order to vocalize that. I'm not saying 'Oh my God pour your heart out to me and tell me you love me in order to stay here.' I'm just saying, give me something." Unfortunately, despite realizing that he was in love with Tayshia during a conversation with his friend Antonia, Ben was unable to articulate his feelings both after his hometown date and after the breakup.

While some Bachelorette fans felt that Tayshia should have given Ben more time to express himself, she revealed that the entire situation took a toll on her as well. "I had no emotions which is kind of weird because you've seen me cry now," she said to Joe. "I think when I start getting defensive, slash protecting myself, I just completely shut down and it's fight or flight mode. I'm going to protect myself, I'm not going to let myself feel any more things, because I don't want to get hurt. So that's why you've seen me shut off."

Despite all of the difficult conversations and uncomfortable emotions, Tayshia teased that her and Ben's love story isn't over quite yet. "There are still things that are going to happen that you guys have no idea about, and it's going to throw everything in a loop," she said, seemingly referring to a recent preview that featured footage of Ben declaring his love for her. Though it seems like Tayshia is at least willing to hear Ben out, another member of Bachelor Nation doesn't think he deserves a second chance.

"He does just enough to stay by," Rachel Lindsay said of Ben on the Bachelor Happy Hour podcast. "He reminds me of Peter Kraus. He reminds me of him in the way that he gives you just enough, but if you really break down what he's saying, it doesn't match up." Rachel also seems to think that Ben is campaigning to be the next Bachelor after Matt James, and she begged producers not to give make him the new lead. "We've been here before with the person who is so desperate to be the lead, [and] it never works out. ... Don't pick him. I don't want to see it."