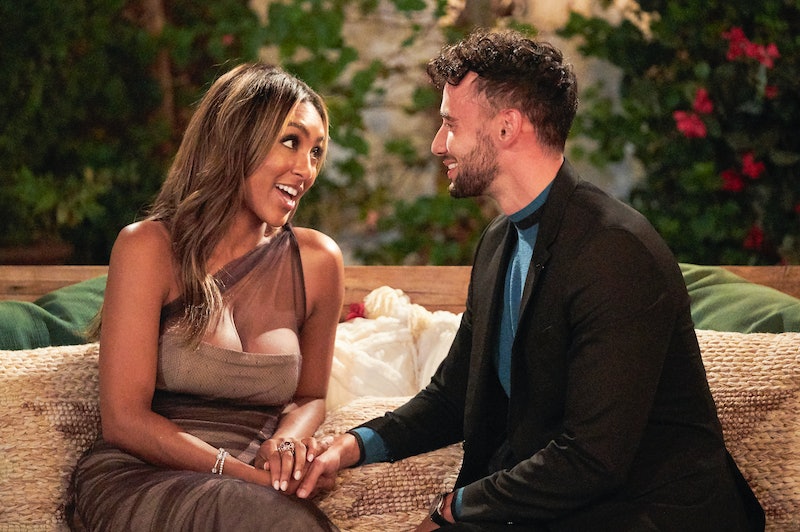 With The Bachelorette finale set to air on Dec. 22, Bachelor Nation has slowly been narrowing in on which Bachelorette contestants will be in Tayshia's top four. While we can probably safely assume that Noah and Bennett's ridiculous feud — which reached a fever pitch involving hand-me-down socks last week — is going to get them kicked off the show sooner or later, that still leaves nine other contestants vying for Tayshia's heart. So who's going to make it all the way to the end?

Tayshia has a decent pool of suitors going into the final weeks, but fans have already picked out the contestants least likely to make the cut. One viewer noted on Twitter that Demar barely gets any screen time, for example, and Spencer has also been in the background. Ed has failed to win over viewers, with many even wishing he was eliminated rather than Eazy. Blake is also not considered to be a frontrunner, and his clay penis in Week 8 probably didn't help to convince anyone otherwise. Riley is a fan favorite, but the promo clip for Week 9 hints that he's hiding a big secret that may even lead to him walking off the show.

If Riley ends up self-eliminating, that really narrows it down to four likely contestants: Brendan, Ben, Ivan, and Zac. These are the names brought up consistently by fans on Twitter, and they do tend to get the most screen time. But let's break down if these theories hold any water.

Will Tayshia Pick Zac on The Bachelorette?

The promo clip for Week 9 hints that Zac's admission of cheating will bring Tayshia to tears, but assuming it's all clever editing, the two still have a very strong connection. "Based on what I've seen. He's been nothing but a stable source of support for Tayshia, and has an unassuming confidence to him that's very attractive," wrote one Twitter user.

The drug misuse specialist has overcome incredible struggles in his life to be the man he is today, and he does have a ton of chemistry with Tayshia. While some fans have pegged Zac as a little untrustworthy for not opening up sooner, others see his hesitance to open up on TV as proof he's the most down-to-earth and relatable contestant on the show.

Will Tayshia Pick Brendan on The Bachelorette?

Brendan won Tayshia's first date, and she told People that she connected with him right away. "We had a long discussion about being married and being divorced — it was the first time that I've had a conversation with a man that could truly relate to me, understood where my heart and my head has been," Tayshia said. "I swear to you, he was speaking the words that were like, everything I've ever felt. So we connected very deeply, very quickly."

While Brendan has faded to the background a bit in the wake of all the Noah drama, fans still consider him a frontrunner for the amount of chemistry he still has with Tayshia.

Will Tayshia Pick Ben on The Bachelorette?

Ben has fumbled a bit on show, initially waiting too long to pull Tayshia aside. Still, she clearly likes how much Ben is willing to open up to her. After stripping during the painting group date, Ben revealed that he's dealt with an eating disorder in the past, and his vulnerability subsequently won him the date rose.

"Ben opening up to Tayshia about his bulimia when the only other person who knew was his sister says a lot about his feelings for her," wrote one Twitter user. It's possible Tayshia could see a future with Ben, as he clearly knows how to open up and overcome difficulties.

Will Tayshia Pick Ivan on The Bachelorette?

Tayshia may not have a ton of physical chemistry with Ivan, but she's connected with him on a far deeper level than the other contestants. He became a fan favorite after his one-on-one date with Tayshia in Week 7, where they frankly discussed their biracial identities and the Black Lives Matter movement.

"Especially with George Floyd, and that’s police brutality, that’s something that really hit home for me,” said Ivan, whose brother was incarcerated for years and had stories of correctional officers beating him. “I felt so bad because my first question was, ‘Well, Gabe, what did you do?’ But it doesn’t matter. No matter what George Floyd did either way, or what my brother did, these people have a job to do, and they need to do it right. They can’t just be hurting people.”

Over the weeks, Ivan has proven to be emotionally mature and invested in having serious conversations, which makes him a pretty obvious choice for the final four.

As for who will get Tayshia's final rose, it's a pretty tight race, as she's been open that she fell in love with multiple men. Buckle in for yet another dramatic finale.