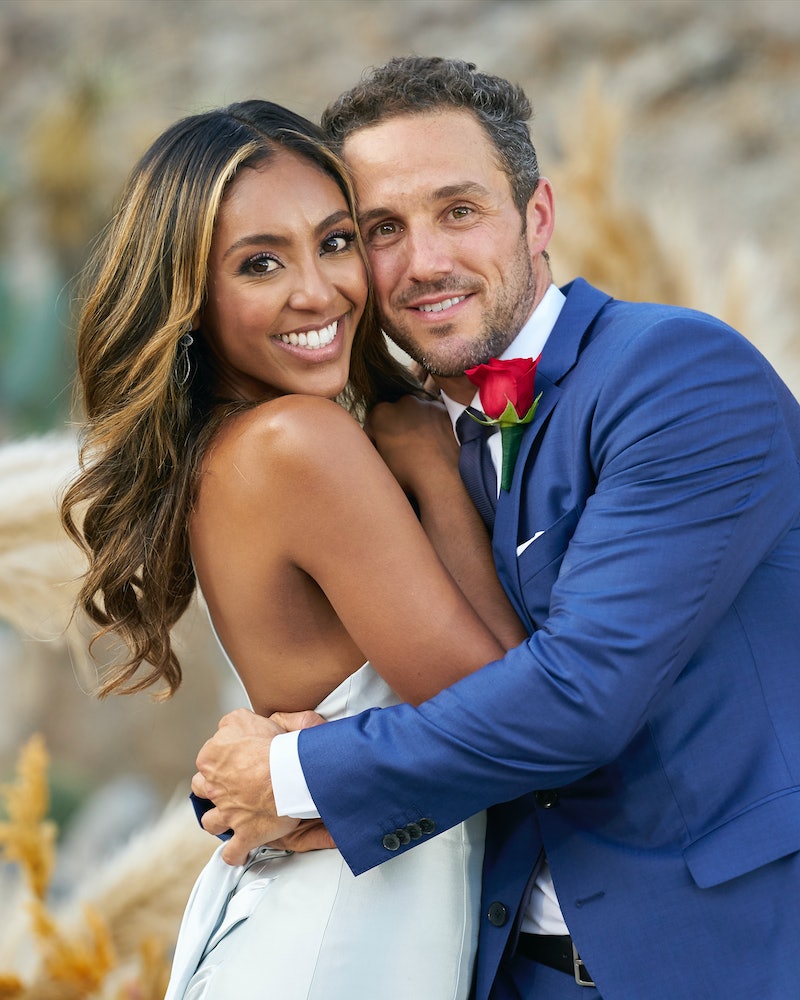 Now that all of Bachelor Nation knows about their engagement, Tayshia Adams and Zac Clark are celebrating the holidays together for the first time. After watching the finale of her Bachelorette season with her family, Tayshia and Zac celebrated their first Christmas together in New York, where the addiction recovery specialist lives. "Cheers to our first Christmas! XO, Clarky & The Queen," Tayshia wrote on her Instagram story, referring to the sweet pet names they revealed during a recent Good Morning America interview.

While the pair's celebration was relatively low-key — after flying in on Christmas Eve, Tayshia and Zac opened presents at home and went for a walk to see the tree at Rockefeller Center — the newly-engaged Bachelorette still attempted to make the mood as festive as possible. "Merry Christmas! I'm on a mission to find a Christmas tree," Tayshia said in an Instagram story, revealing that she planned to surprise Zac with a last-minute tree. "I was planning to buy a tree ... and it's Christmas Day, there's none. But last night we went to a deli after dinner and there was a little holly tree [available]."

Unfortunately, Tayshia's plans for a festive tree to put the presents under didn't quite work out; in a later post, she shared that they had decided to place a succulent pot on top of the gifts instead, writing, "This will do!" Still, that didn't dampen the couple's mood, as they were still full of holiday cheer during their evening walk. "She's getting her New York City on at the Rockefeller," Zac said in a video on his own story, while Tayshia laughed and danced for the camera.

Tayshia and Zac's "first Christmas" capped off a week-long celebration for the couple, following their engagement on the finale of The Bachelorette, which aired Dec. 22. Before heading out to the East Coast, they kicked off the holidays a little early at Tayshia's family home in California. "This is the first time in a year & a half my entire family is together!" she wrote on Instagram alongside a family photo that she shared on Dec. 25. "And in addition to that we have my brothers fiancé Samantha & my fiancé Zachary! MY HEART IS SO FULL!"

Their bicoastal celebrations are appropriate for Zac and Tayshia, as they explained on Good Morning America that they plan to bounce between her home in Los Angeles and his in New York now that they are together, rather than maintaining a long-distance engagement. "I'll have my place here, but I'm looking forward to spending some time in New York with him and getting used to being bicoastal," she said on the show. He echoed those sentiments in an interview with People not long afterward. "She has a one-way ticket to New York," Zac said. "We're going to get comfortable. And I'm going to date the heck out of her!"

In the meantime, the couple are planning to continue to "date" and get to know one another rather than rush down the aisle. "I think it comes back to what we talked about early on: dating and getting to know each other," Zac told Rachel Lindsay and Becca Kufrin during an appearance on the Bachelor Happy Hour podcast. "[We will] start spending extended periods of time with each other. You're learning to live with another human being." Tayshia added, "All the big-picture things, all the conversations that people have down the road, we've already taken care of a lot of that. Our communication is phenomenal."

And more than anything, they're just happy to be able to share their love openly with their loved ones and followers: "We're not rushing, but it's an amazing sense of security to know that I'm not going anywhere, and he's not going anywhere," Tayshia told People. "It's been a really hard year for everyone, including myself. But I'm so happy that I ended it with so much love."