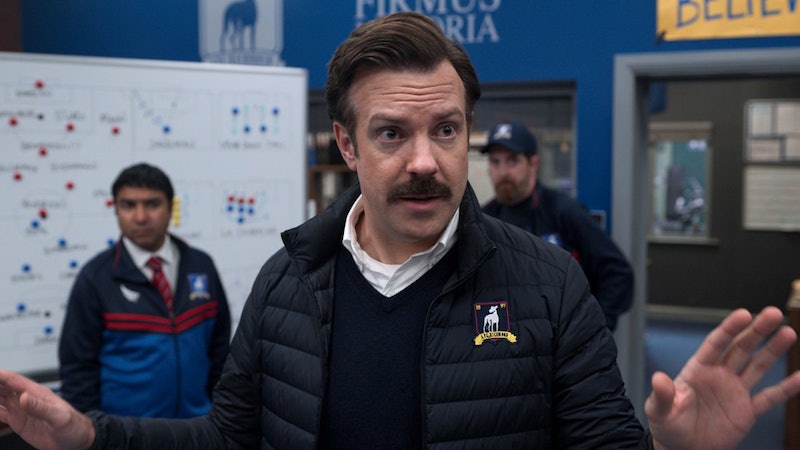 At the end of the first season of the Golden Globe-nominated comedy Ted Lasso, Lasso’s AFC Richmond is relegated from the Premier League, exactly as team owner Rebecca hoped would happen when she spitefully hired an American college football coach to manage the squad into the ground. This makes the storyline for Ted Lasso Season 2, which entered production in January, clear: Lasso, this time with Rebecca’s encouragement, will need to lead his team out of England’s second-tier soccer league and back into the big show. AppleTV+ must believe in Lasso as much as Rebecca does because the show has also already been renewed for a Season 3, which series co-creator Bill Lawrence has said will be its last.

In a December 2020 podcast episode, Lawrence explained that series star Jason Sudeikis has a master plan for his character’s arc: “He’s kind of mapping it out, it’s a three-season show.” Not that Lawrence is happy with it ending so soon. In fact, he immediately started to backtrack, daydreaming scenarios that might convince Sudeikis to stay on board. “After the third season, I will desperately try to get Mr. Sudeikis to do a…” Lawrence started. “The only way I think a fourth season of Ted Lasso exists would be if TL went and coached a soccer team that played about a block from Jason’s house in real life, you know what I mean? He’s got young kids.”

On June 21, AppleTV+ released the official trailer for Season 2 of Ted Lasso, offering viewers a look into the team’s journey to the big leagues, which will see Ted step into his Led Tasso evil alter ego to get his players to listen. According to the streaming service, the entire ensemble cast from Season 1 is set to return to the series, with the addition of I May Destroy You actor Sarah Niles, who will play a sports psychologist named Sharon. Most details about her character are unknown, though in the trailer, she sternly rejects Lasso’s famous biscuits due to the fact that she doesn’t eat sugar. He cracks a joke in response, and she doesn’t seem to be amused. You’ll have to tune into Season 2 for more of what appears to be a complex dynamic between the two, especially since Sudeikis refused to share any details about the new season at the Golden Globes, where he took home the award for Best Actor.

In its first season, Ted Lasso emerged as arguably Apple TV+’s most successful show, winning critical praise and Golden Globe noms for best TV series and one for Sudeikis’ affecting performance in this fish-out-of-water comedy. And the network has already demonstrated its willingness to invest in the sleeper hit. Beyond renewing it for a Season 3, Lasso's Season 2 order was upped from 10 episodes to 12. According to series actor Juno Temple, the decision was made to accommodate a story that creators felt needed to unfold more slowly.

Whatever that means for AFC Richmond's Premier League bid, it won’t be long until we find out. Season 2 of Ted Lasso is set to hit Apple TV+ on July 23, 2021.