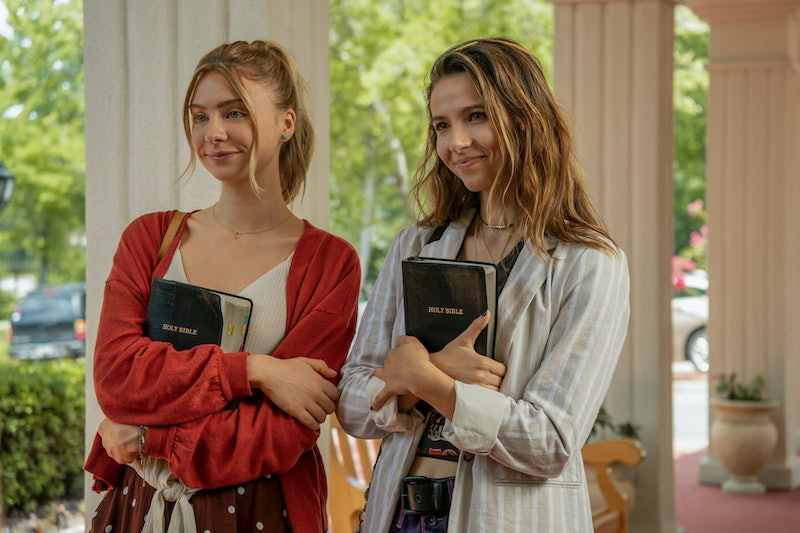 "[Sexual] empowerment is sort of all encompassing," says star Anjelica Bette Fellini, who plays Blair. As Blair and Sterling show, there's not just one way to feel sexually empowered. This is much different than the way Fellini and co-star Maddie Phillips, who plays Sterling, experienced high school — though it's hardly the biggest deviation from their lives, given that Sterling and Blair also moonlight as amateur bounty hunters.

Fellini, who grew up in New York City and describes herself as a late bloomer, appreciated that Blair "can ask for what she wants in and out of the bedroom and is pretty clear with her sexual experience." Phillips, meanwhile, didn't come of age anywhere close to the Bible Belt portrayed in the show, though she did attend an all-girls Christian school after relocating from Vancouver to Australia at age 10. Unlike Sterling, she wasn't religious, and spent her time doing "a lot of theater and drama and nerdy things." Instead, she likens her character to another fictional teen: Gilmore Girls' Rory Gilmore.

"I feel like Rory and Sterling are quite similar in that they have this really 'good-girl' reputation, and then as soon as they step outside of that line, it's very shocking to the community, when really it's just a young woman trying to live her life and discover more parts about herself," Phillips says.

One thing she and Fellini do have in common with their characters? Their close bond. Before the two were even officially cast in the show, they kept in touch via FaceTime after meeting at an audition and were "just kind of obsessed" with each other. "We discovered that we both had very similar Finstas," Phillips jokes. "As soon as you get accepted into somebody's Finsta, you're best friends, right?"