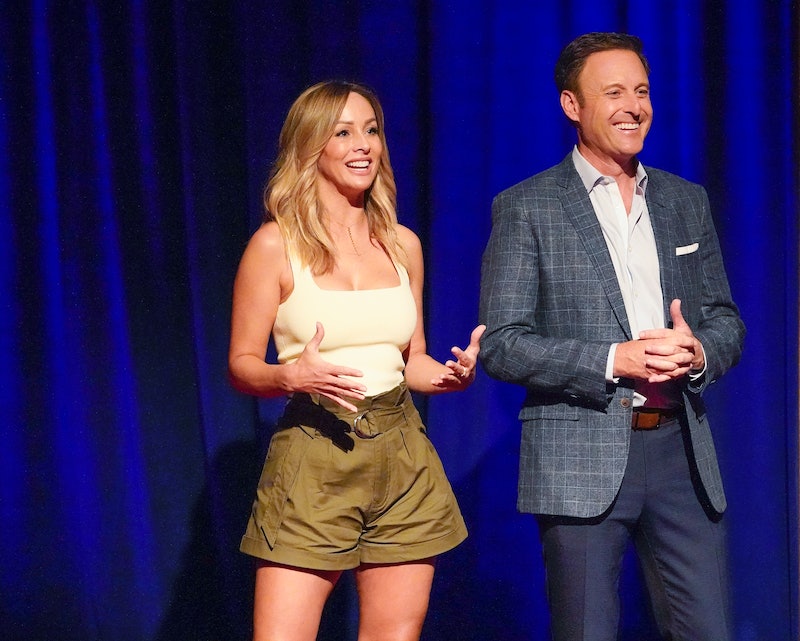 ABC has finally officially confirmed to fans that Tayshia Adams is the new Bachelorette — and now, the men on the season know as well. In a new promo clip for the Nov. 5 episode of The Bachelorette, Chris Harrison says Clare's men were "cheated" before introducing Tayshia as the franchise's new leading lady. The clip also confirms Clare's early exit from the series, after she fell hard and fast for football player-turned-model Dale — so hard and fast, in fact, that some of the other contestants even threatened a walkout due to Clare's tunnel vision.

In the clip, which Harrison shared on Instagram on Oct. 31, the host acknowledges the unusual and slightly difficult circumstances as he prepares the remaining men to meet their new Bachelorette. "Boys, it is great to see all of you here because you guys got a little cheated," he tells them, ahead of Tayshia's big entrance. "You didn't really have an honest chance to find love, so your new Bachelorette is on her way here, right now."

While Harrison doesn't reveal Tayshia's identity to the men just yet, he does tease the possibility of a new romance before heading out to meet her limo: "The next person to walk through these doors will be your new Bachelorette, and possibly your wife." No pressure, though, right?

"As nervous as I am, I'm sure she's doubly nervous right now," Ivan says to the other men as Harrison heads out to greet Tayshia. In response, fan favorite Bennett tells the guys to remain optimistic. "I'm sure she's nervous, but hopefully she's ready for what she's getting into." However, fans don't get to see how nervous Tayshia is to meet her suitors, as the clip ends just as the limo pulls up in the driveway and the door opens.

Reports that Tayshia would replace Clare as the Bachelorette first broke in August, although the reality series didn't confirm the big switch-up until Oct. 27. In a recent interview with Page Six, Harrison explained that producers consciously decided to wait to reveal Tayshia as the new Bachelorette in order to keep from overshadowing Clare and Dale's love story.

"It was fun for us and challenging to try to decide how and if and where we’re going to lean into the rumors and lean into what happened," he said. "Even if things get spoiled or you might know [what’s going on], you don’t really know."

Revealing that he was "intimately involved" with the decision to bring Tayshia onto the show, Harrison continued, "First and foremost, we wanted to make sure this was Clare’s season of The Bachelorette. Clare needed to be allowed to drive the show and be in charge." He also seemed to address the accusations that producers had always planned to replace Clare, which the Bachelorette herself has recently supported, saying, "It’s tough to come up with a plan when you’re dealing with someone who’s going to make the ultimate decision for you."

Though he told the outlet that the entire situation caused a big "dilemma" among producers, Harrison is ultimately glad that Clare found love, even if she didn't follow the show's standard timeline for doing so. “Clare falling in love is not a bad thing," he said. "If we do that in 10 weeks? Great. If we do that in a year? Super. If we do that in 10 days? Wow, OK, that’s a record."

Fans will have to tune into The Bachelorette to see just how that record-breaking romance ends for Clare and Dale.