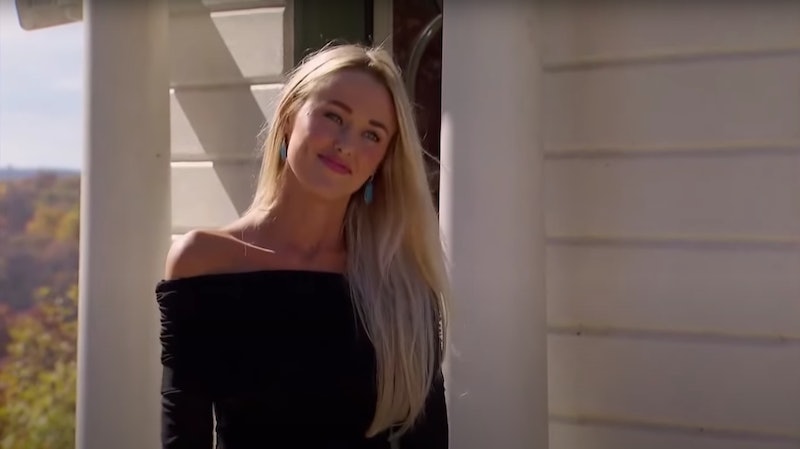 Fans weren't the only ones who fell in love with Matt James the moment he was announced as the new Bachelor — one former contestant was so smitten that she crashed the set just for her chance to romance him. In a new interview on the Bachelor Recap podcast, ABC executive Rob Mills revealed that Heather Martin thought Matt James was "her husband," and so she decided to turn up unannounced at the Pennsylvania resort where his season was filmed.

Heather, who previously appeared on Colton Underwood's season of The Bachelor, even shocked host Chris Harrison with her arrival at the resort's security tower in the season preview, and Mills explained that he was not the only one surprised by her sudden appearance. "She felt for sure this was her husband and basically did anything she could to get there and track him down," he told host Julia Cunningham on the Jan. 5 episode of her podcast. Heather herself seemed to echo that in the brief clip, where she said that "this is an impossible situation. Still, I do feel like Matt's worth it."

While Mills didn't reveal much about how long Heather will last on the show, it's clear from the preview that her arrival caused plenty of drama. "Heather, what are you doing here?" Harrison asks after she steps out of the car. "You could honestly destroy this whole thing for Matt." Meanwhile, a tearful contestant admitted that she wanted Heather to "go home" instead of interrupting the process. "You already had your f*cking shot at a Bachelor," they said.

It's unclear how well Matt and Heather knew each other beforehand — or if they even met before filming began — but they have a mutual friend in Hannah Brown. (Hannah appeared on Colton's season before romancing Matt's best friend, Tyler Cameron, on her own season of The Bachelorette.) In December, she also revealed on Instagram that her goal was to be "more bold" in the new year, which was likely inspired by her very daring decision to crash Matt's season of The Bachelor for a shot at love.

Heather isn't the only woman who will be joining Matt's season a little late; in the preview, Harrison revealed that five new women join the cast after "weeks" of filming to embark on their own journeys with the Bachelor. Like the former contestant, the new women seem ready to stir things up in the chateau, with new arrival Brittany Galvin telling the girls that producers just "wanted to save the best for last." "This could ruin my entire life," she says in the clip while the ladies discuss rumors about someone's inappropriate offscreen relationships.

Heather, the new contestants, and the women who arrived on night one will all have to earn the approval of Tyler before they can live happily ever after with the Bachelor. "I think what you're going to look for is someone who kind of resembles his mother," Tyler told Harrison back in June about the woman he sees Matt ending up with. "[And also] someone who is ready to get on the ground with Matt and change the world, because that's what Matt is going to do. Matt's going to change the world. And [he needs] someone that's going to take on that challenge with him."