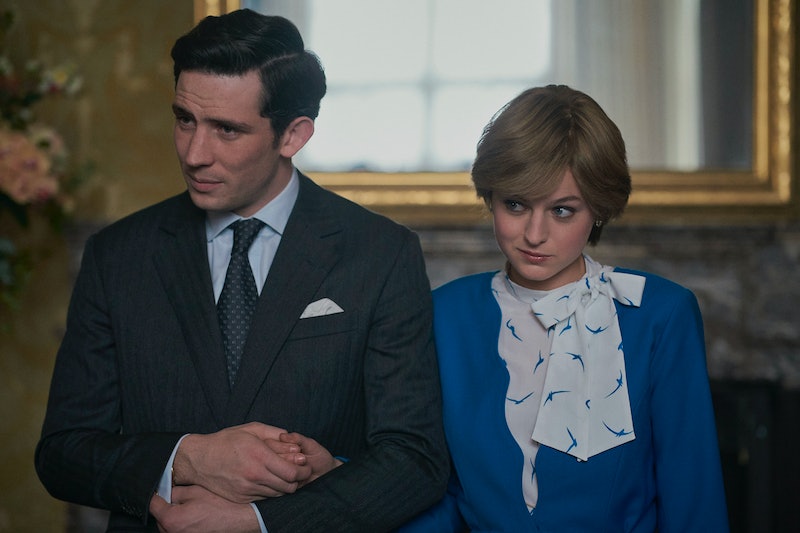 It was always going to be an iconic scene – the reenactment of that engagement interview – but little did we know about its viral potential. Emma Corrin’s coquettish and oh-so-accurate Diana side eye has captured the attention of Twitte, and spawned a bevvy of the most royally amusing memes.

The context for the scene is very serious indeed – which perhaps adds to the amusement of many – and Corrin's portrayal spot on. In the third episode of season four of The Crown, titled “Fairytale,” Prince Charles (Josh O’Connor) has just asked Diana Spencer (Corrin) to marry him. An equally awkward ring selection scene and press conference ensue.

The creators of the Netflix drama have kept rather faithful to the 1981 event; see their picture-perfect costumes. While Charles clumsily replies to questions the press ask about their upcoming nuptials (“whatever ‘in love’ means” – seriously, Charles) his blushing bride-to-be sits awkwardly by his side, with that bashful, crooked smile.

Taken out of context though, it proves rather hilarious – and versatile. Wayne David, a 39-year-old part-time DJ in south east London and creator of the meme, tells Buzzfeed: "She basically looks like a rabbit in the headlights. In isolation it really made me laugh for some reason.”

The smize paired with a funny caption makes it is easy to understand why. David’s post created an avalanche of copycat memes and racked up 2.5 million views in one day.

Even as a meme, the People’s Princess (and Corrin's portrayal by extension) has a knack for capturing our idiosyncrasies with style and grace. Here are some of our favourites, including the one that started it all…

More like this
'Brookside' Is Coming Back & Soap Opera Fans Are Going Wild
By Sam Ramsden
The OG Power Rangers Are Returning For A Spandex-Clad Special
By El Hunt
Anne Hathaway Shared A "Thrilling" 'Princess Diaries 3' Update
By Darshita Goyal
Everything To Know About The 'Daisy Jones & The Six' TV Series
By Maxine Harrison and Brad Witter
Get The Very Best Of Bustle/UK
Sign up for Bustle UK's twice-weekly newsletter, featuring the latest must-watch TV, moving personal stories, and expert advice on the hottest viral buys.