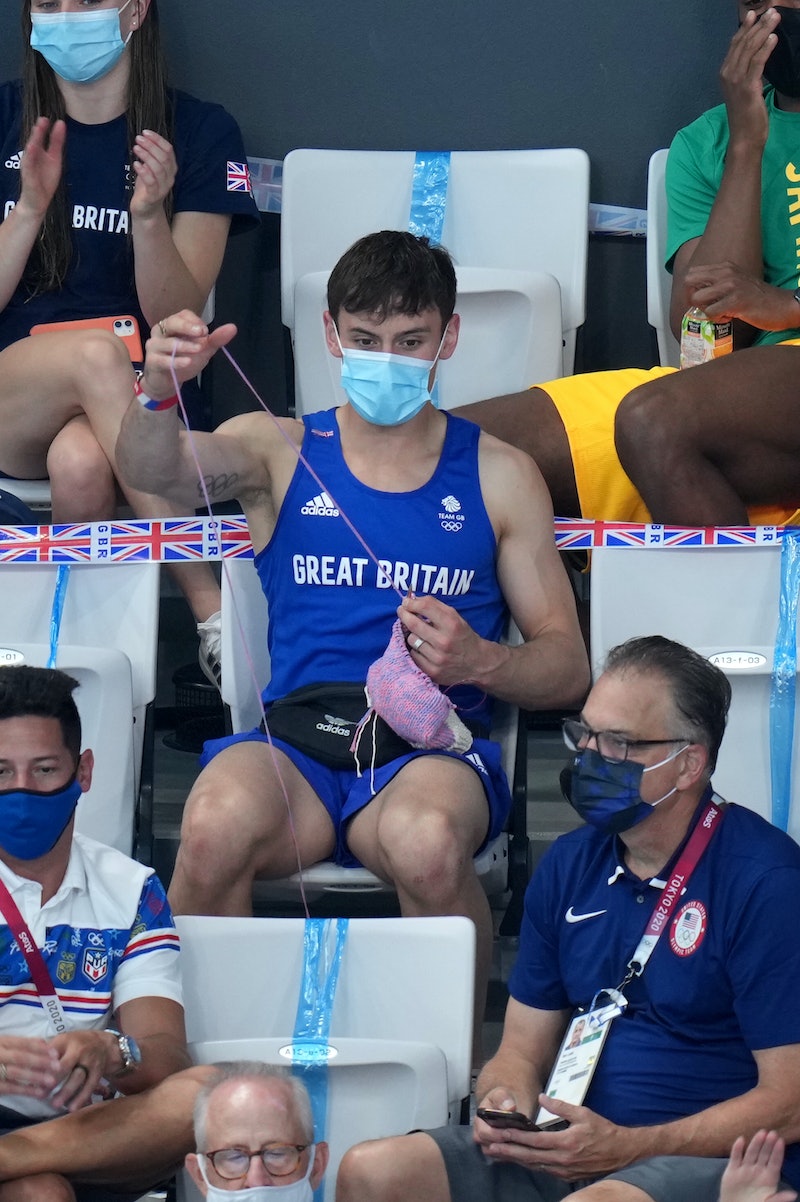 Tom Daley might have wowed us with his sharp and precise diving skills but, outside of sport, he’s made our hearts melt with his love of crochet and knitting. And, I mean, get you a man who can do both, am I right?!

Following Daley’s historic gold medal win last week, which saw him clinch the top spot in the Men’s synchronised 10m platform event alongside Matty Lee, the athlete revealed he had knitted an adorable ‘cosy’ to house the hard-won medal.

But the cosy isn’t the only thing Daley has created with a pair of knitting needles. Oh no. The 27-year-old dad of one has handmade all sorts of items, from rainbow stripped sweaters for himself and his friends to a lilac cat couch for his cats. He’s even got an Instagram page dedicated to his crafting hobby.

He’s previously spoken about how the craft has helped him alleviate the stress of training for the Olympics, and it seems he uses it to keep his hands busy while waiting, too. Most recently, he was captured on camera knitting with some purple yarn during the women’s 3m springboard final on Sunday morning.

The BBC commentator Katherine Downes could be heard saying, “There's Tom Daley — he's got his knitting needles out. What do you reckon he's crafting now? He’s already made a little pouch for his Olympic gold medal. I wonder who he's making that purple concoction for?” (Turns out it was a sweater for a dog. I mean, really, what is this man doing to us?!)

Later, Daley was seen working on an almost completed sweater with “Team GB” and the Olympic rings emblazoned on the front. As BBC Sport rightly says, “It's a thing of beauty!”

Unsurprisingly, the Internet went nuts, with Twitter users calling him a “national treasure” and similar gushing praises. Even the official Olympics account got in on the action. Keep scrolling to find out more.

More like this
David Beckham’s Controversial Qatar Deal Skyrocketed His Net Worth
By Catharina Cheung
Rita Ora Finally Opened Up About Marrying Taika Waititi & Their "Perfect" Wedding
By Sophie McEvoy and Catharina Cheung
4 Surprising Celeb Throuples That Got The Internet Talking
By Sophie McEvoy
Emily Atack’s Net Worth Would Make Charlotte Hinchcliffe Proud
By El Hunt
Get The Very Best Of Bustle/UK
Sign up for Bustle UK's twice-weekly newsletter, featuring the latest must-watch TV, moving personal stories, and expert advice on the hottest viral buys.