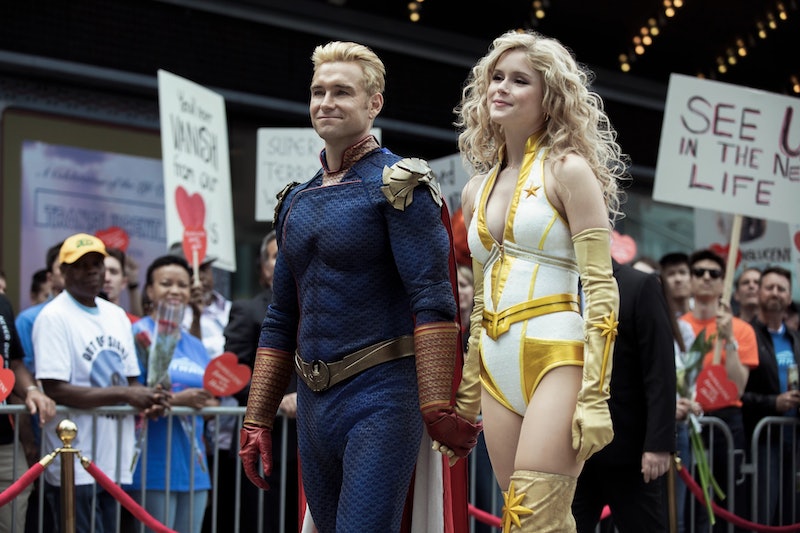 Since its debut in the summer of 2019, The Boys has quickly become one of Amazon's most popular original series to date. So it's no surprise that a The Boys spinoff is on the way. The new series was confirmed about halfway through The Boys' second season on Sept. 24, with Deadline reporting that the offshoot series' production has been "fast-tracked" by Amazon. The spinoff's pilot is being written by Craig Rosenberg, one of the executive producers of The Boys. Rosenberg will also serve as the series' executive producer and showrunner. Joining him as executive producers are most of The Boys' EPs, including showrunner Eric Kripke, The Boys comic book creators Garth Ennis and Darick Robertson, and the iconic comedy duo of Seth Rogen and Evan Goldberg.

The new series will have a bit of a younger slant compared to its predecessor, as its main setting will be on a college campus. The show will take place within the same universe as The Boys, but will focus on different characters. It also is not based on a specific comic book title like The Boys, but was loosely inspired by a certain group of heroes from The Boys comics. Here's everything else we know about The Boys spinoff so far.

When will The Boys spinoff premiere?

Considering the fact that the show is still being written, it likely won't premiere for some time. Though its production has been "fast-tracked," there's still a lot of work to be done before the spinoff — which is currently untitled — makes it to Amazon Prime Video. Episodes need to be written, actors need to be cast, sets need to be built, etc. The coronavirus pandemic further complicates production, and with The Boys Season 3 production reportedly slated to take place in Canada from Feb. to Aug. of 2021, it's possible that production on the spinoff may not begin until the fall of 2021. If that happens, fans could possibly be looking at a 2022 premiere date, but at this point in time, no official premiere date has been announced.

Who's in The Boys spinoff cast?

Speaking of things that haven't been announced, we don't know who's going to be in The Boys spinoff yet, either. But we're pretty sure who won't be in it, and that's any of the main characters from The Boys. The new series is a spinoff of The Boys only in that it's based in the same universe, and not because it will be starring any of that series' characters. In an interview with The Wrap, Kripke did leave the door open to possible cameos from The Boys characters, but explained that that's not really what the spinoff is about. "We’re not spinning off characters into it, they just exist in the same universe," he said.

It can also be expected that the cast of the spinoff will be much younger than that of The Boys. The show is set at a superhero college, so fans should expect to see college-aged stars. Especially since Kripke declared the producers' intention to make a very realistic show about college students, which isn't typically accomplished with a cast full of 30-year-olds. "As The Boys is an unflinching look at reality, the goal for this is to make this superhero show one of the most realistic college shows anyone’s made," Kripke told The Wrap. "And really deal with real college issues and really explore what it’s like to be that age."

What is The Boys spinoff about?

Although not many specific details have been revealed about the spinoff, fans will likely have a pretty good idea of what it will be about. The idea for the show came from The G-Men, a parody of The X-Men who appear in The Boys comics. The G-Men, like the X-Men, have their own school, so Kripke and company decided to see what life would be like at a superhero college in their new show. The series is set at America's only college for superheroes, which is run by Vought International, naturally. The plot will follow students as they deal with typical college issues while also competing against one another to secure the best Supe jobs once they graduate. Deadline described the spinoff as "an irreverent, R-rated series that explores the lives of hormonal, competitive Supes as they put their physical, sexual, and moral boundaries to the test, competing for the best contracts in the best cities. Part college show, part Hunger Games — with all the heart, satire, and raunch of The Boys." Sounds like a winner.

More like this
Here's When 'The Crown' Season 5 Will Premiere — And What To Expect
By Bustle Editors
'The Rings Of Power' Episode 5 May See The Realms Brought Together
By Kadin Burnett
'The Rings Of Power' Episode 4 May Put A Face To Season 1’s New Villain
By Kadin Burnett
The ‘Emily In Paris’ Season 3 Release Date Is Here, Plus The First Footage
By Bustle Staff
Get Even More From Bustle — Sign Up For The Newsletter