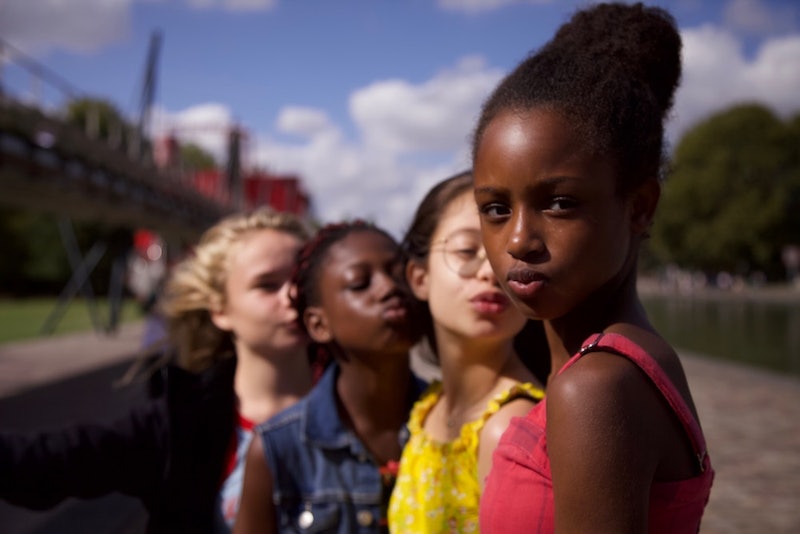 In an op-ed on modern girlhood and adolescence, Cuties director Maïmouna Doucouré responded to the controversy surrounding her new coming-of-age French film. Cuties, titled Mignonnes in French, follows a 11-year-old Muslim Senegalese immigrant named Amy who, much to the chagrin of her conservative family, forms a dance troupe to gain popularity after she moves into a housing project in Paris. Fueled largely by the far-right and QAnon groups, a campaign against Cuties began building well before its premiere, accusing the film of promoting the sexualization of children — the very criticism the film is trying to make.

Noting the irony of wanting to “make a film in the hope of starting a conversation about the sexualization of children,” Doucouré noted in an op-ed for The Washington Post that if adults are unsettled by the film, that's the point. "Some people have found certain scenes in my film uncomfortable to watch. But if one really listens to 11-year-old-girls, their lives are uncomfortable," she wrote.

The French director explained that Cuties was inspired by the ruminating conversations she had with young girls about the tolls of puberty — ones exacerbated by the pressures of social media and the construction of the self through post “likes” and follower counts. Moreover, she revealed that they invited "a trained counselor" on set during any filming of particularly provocative dance scenes — like the one that went viral as part of the #CancelNetflix movement tied to the film — to ensure the safety of the young cast.

"We, as adults, have not given children the tools to grow up healthy in our society,” Doucouré wrote. “I wanted to open people's eyes to what's truly happening in schools and on social media, forcing them to confront images of young girls made up, dressed up and dancing suggestively to imitate their favorite pop icon." She continued, "I wanted adults to spend 96 minutes seeing the world through the eyes of an 11-year-old girl, as she lives 24 hours a day."

She also indirectly addressed the #CancelNetflix hashtag that was trending on the day of her film's Netflix's premiere — a movement supported by people like Sean Spicer and former Democratic Presidential candidate, Tulsi Gabbard. "It's my sincerest hope that this conversation doesn't become so difficult that it too gets caught up in today's 'cancel culture,'" Doucouré concluded.

Netflix, meanwhile, has stood by Doucouré, though the streaming service played a major role in starting the Cuties backlash to begin with. After releasing a film poster for Cuties that actually did sexualize the young protagonists, Netflix was met with outrage by both detractors and supports of the film. The poster was removed, but the damage was done. Still, Netflix has defended Doucouré’s film. “Cuties is a social commentary against the sexualization of young children,” a Netflix spokesperson said in a statement to TheWrap. “It’s an award-winning film and a powerful story about the pressure young girls face on social media and from society more generally growing up, and we’d encourage anyone who cares about these important issues to watch the movie.”

More like this
How To Stream Knives Out 2: When Will Glass Onion Be On Netflix?
By Radhika Menon
Here’s Everything Coming To & Leaving Netflix In December
By Jake Viswanath
Dodi Fayed Produced Movies Starring Robin Williams & Demi Moore After 'Chariots Of Fire'
By Brad Witter
Lindsay Lohan Explained That 'Mean Girls' Homage In 'Falling For Christmas'
By Brad Witter
Get Even More From Bustle — Sign Up For The Newsletter