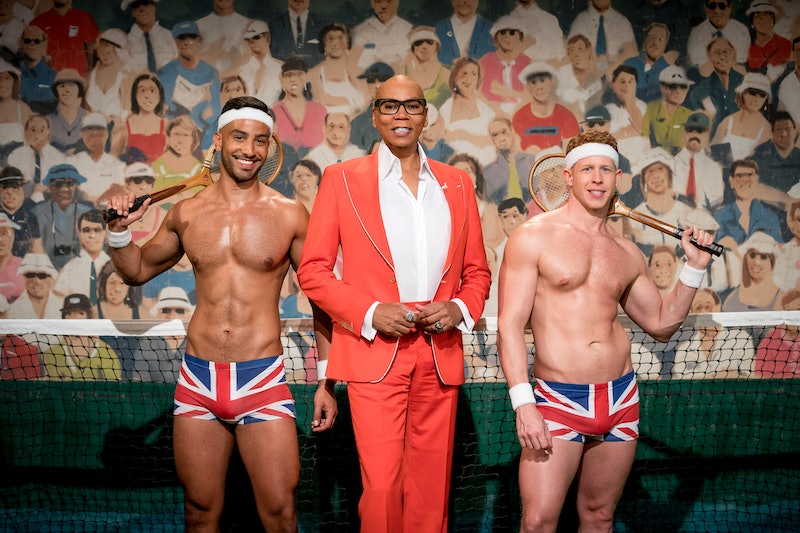 Mother Ru, the undisputed goddess of drag, is back with a sickening line-up of queens hoping to be crowned the UK's next drag superstar. In addition to runway showdowns and Werk Room drama, Drag Race UK fans are presumably also looking forward to feasting their eyes on this year's hunky Brit Crew, who will be on hand to assist RuPaul and the competing queens throughout the new series. So, here's everything you need to know about the Drag Race UK series 2 Brit Crew. For very important research purposes, obviously.

Appearing alongside RuPaul and this year's Brit Crew is Drag Race royalty Michelle Visage and rotating panellists Graham Norton and Alan Carr, who will once again be on hand to provide their expertise to a fresh batch of homegrown queens. Elsewhere, the likes of Liz Hurley, MNEK, Sheridan Smith, Jourdan Dunn, Lorraine Kelly, Dawn French, and many more, will make up this year's celebrity guest judge lineup — while special guests including Jodie Harsh, Natalie Cassidy, Raven, and more, are also set to appear.

However, if it's eye-candy you're craving, the Brit Crew will likely become your highlight of the forthcoming season, and you can get to know new boys Ashraf, Bas, and Tony below. Enjoy.

Right now, Ashraf, Bas, and Tony are the only Brit crew members we know about. But if any more are announced, I'll keep you posted! Watch this space.