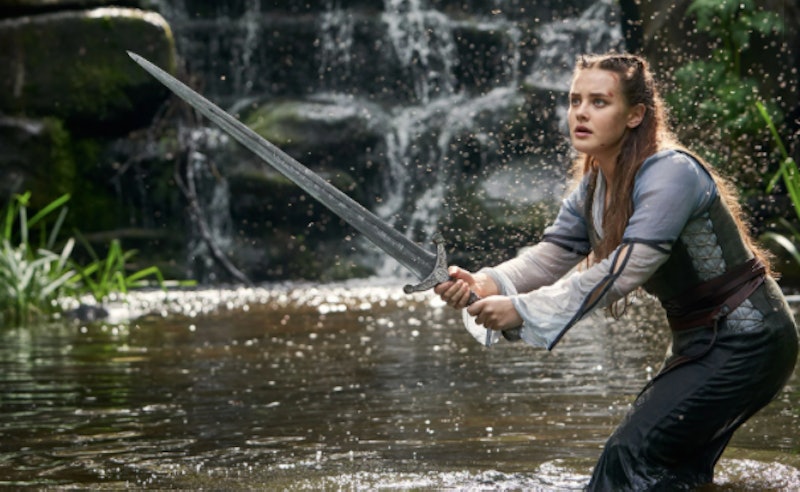 Netflix's Cursed adaptation is now available to stream, and its tale of a wolf-slaying Fey witch named Nimue might have you wondering what the Fey Kind in the Cursed book — the source material for the show — are like. Just like the new series, Thomas Wheeler's novel is a fun and gritty romp through the Arthurian legend, but the Fey are just a little bit different than Netflix portrays them.

For context, Wheeler's Cursed puts a new spin on the legend of King Arthur, casting Nimue as the leader of a movement to unite humanity and the Fey. Readers familiar with Arthur's classic story will recognize Nimue as the Lady of the Lake: the mercurial enchantress charged with guarding the sword Excalibur until its rightful wielder comes along. Although the Sword of Power Nimue receives in Cursed is never called Excalibur, you're not making a huge leap in logic if you assume they're one and the same. Except this time, it's heavily implied that Nimue, not King Arthur, will be the one responsible for uniting England.

And why is England so divided in Cursed, exactly? If you've seen any of the Netflix series, you know that the Red Paladins (a sect of crusading religious fanatics), want to eradicate the Fey (a pagan species) from England. Cursed isn't the first Arthurian adaptation to turn the Christianization of Europe into a focal point, but few others have depicted attacks on England's pagan roots as brutally as Wheeler's novel and Netflix's adaptation.

Although they're often referred to using the collective "Fey Kind," the Fey in Cursed are as diverse as their human counterparts. So diverse, in fact, that Nimue cannot identify some of the Fey clans when she meets them. From the novel:

"Some of the clans were so rare that Nimue had never seen them before. Clans like the shy Cliff Walkers — mountain folk, the men wearing thick helms of ram horn and the women with intricate scar patterns of interlocking circles on their arms. Or the Snakes — who worshipped the night and lived in floating huts on the glade rivers.... Storm Crafters were tattooed head to toe and reputed for their rain summoning, while the Moon Wings communed with night birds and were blood enemies of the Snakes.... The Tusks worshipped the boar and were equally hot-tempered. Fauns wore antlers, rode giant bucks as mounts, and were outstanding archers. There were even Plogs, tunnel dwellers, who had evolved to lives of perpetual darkness and labor. Their hands were two-fingered, thick, clawed, and calloused, and most were blind."

Singling the Fey out for attacks is no easy feat in Netflix's Cursed, because a lot of them look human, at a glance. But the Fey cannot disguise themselves so easily in the Cursed book. Although the series shows a few rituals that humans can use to identify Fey — such as brushing a leaf over a young boy's hand, causing it to turn green — the book versions of Pym and Nimue don't feel comfortable walking through a human settlement without taking measures to hide their Fey identities. Common to both versions of Cursed, however, are the Fingers of Airimid: telltale markings that appear on the Sky Folk's skin when they use magic, and which instantly identify them as Fey.

The Red Paladins' persecution of the Fey for being who they are plays a major role, both in Wheeler's novel and in the Netflix adaptation of the same name. The Fey Kind in Cursed are a magical minority in England, and themes denouncing religious and ethnic persecution shine through in both versions of the story. Readers and viewers who come for the feminist retelling of King Arthur's story are sure to be pleased.