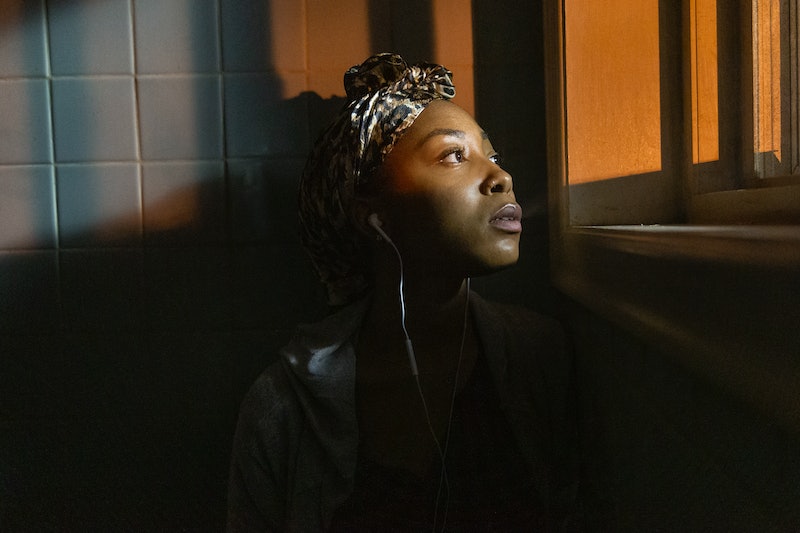 Spoilers ahead for Season 1 of Grand Army. Netflix's new teen drama Grand Army only premiered on Friday, but it's already been at the center of controversy. On Sept. 2, playwright and screenwriter Ming Peiffer tweeted that she'd worked on the show but quit alongside two other writers of color due to alleged "racist exploitation and abuse." She also criticized showrunner Katie Cappiello, though she didn't mention her by name. "The show runner and creator went full Karen and called Netflix hr on the Black writer in the room for getting a haircut," Peiffer claimed of Cappiello, who is white. In a second tweet, Peiffer alleged that Netflix was "fully aware of it all and did nothing except hire more writers of color to lend their names to the show," only to reach out two years later to "hear their concerns" ahead of Grand Army's release. (Peiffer, Cappiello, and Netflix all declined to comment to Bustle).

This is particularly significant given the content of the show. It's based on Cappiello's 2013 play SLUT, which follows a white Brooklyn teen named Joey who's raped by her closest friends. Grand Army expands that story, introducing four teens of color who deal with issues like poverty, homophobia, and racism. As the main character from SLUT, Joey is the most fully realized teen, portrayed with charisma and poignancy by Odessa A'zion. As in the play, her story includes sharp criticisms of slut-shaming, rape culture, and the criminal justice system's inability to fairly handle related cases. But while these are undeniably important topics, the focus on Joey means the characters of color tend to feel secondary, and their storylines are executed with varying degrees of success.

It's Odley Jean's Dom, a Black teen struggling to pursue her own dreams and ambitions while helping to keep her family afloat, who feels the most like the show's co-lead. In a subsequent tweet, Peiffer alleged that she and the other writers quit specifically after trying to change Dom's storyline into something other than "poverty porn." Jean imbues Dom with spirit and vulnerability, and compared to Joey's season-long mental breakdown, Dom does have more moments of levity and joy. But Dom also feels a decade older than Joey: while Joey parties and stages a "Free the Nipple" protest, Dom juggles studying, housework, and the prospect of entering into a transactional Green Card marriage in order to get her family out of a financial bind. Though Dom has probably the happiest ending of the bunch by season's end, it's hard to shake the feeling that on paper, she falls into the Strong Black Woman trope. The narrative tries to subvert this when Dom herself expresses how Black women need mental health resources, but it feels at odds with the way Grand Army treats her character as a whole.

These same flaws appear in other storylines. Indian American Sid (Amir Bageria) grapples with being gay and being called various Middle Eastern and South Asian slurs by his white peers, and yet this feels subsidiary to his arc about perfecting his college application essay. Cheerful musicians Owen (Jaden Jordan) and Jayson (Maliq Johnson) get similarly short-changed. After a small prank lands both of them in trouble, Jayson gets two weeks of suspension while Owen — who played a more active role in the prank — gets 60 days. This harsh treatment radicalizes Jayson, who becomes close with Dom's boyfriend John Ellis (Alphonso Romero Jones II), a charismatic student activist fighting against the school-to-prison pipeline. Together they plan a school-wide walkout demanding that Grand Army High rethink its racist policies and toxic culture.

But the entire walkout is undermined by Leila (Amalia Yoo), a freshman who becomes cartoonishly villainous by the end of the season. In a horrendously self-serving move, she emails a fake bomb threat to the school just to ensure the play she was kicked out of gets canceled. It's on the same day as the walkout, ultimately undercutting all the momentum Jayson and John built throughout the season. It's possible this is an analogy for anti-Blackness within the Asian community, but Leila is never confronted about her actions (assumedly to leave room for a potential Season 2).

This compounds other issues present in Leila's storyline. As a Chinese American adopted by white, Jewish parents, Leila's struggle to navigate her blended identity is relatable. But any nuance that may have been present in the character is quickly buried under flat writing and increasingly angry, animated zombie fantasies that feel tonally off from the rest of the show. Grand Army also spends an inordinate amount of time painting Leila as an antagonist — a misguided approach when all of the other Asian girl characters exist entirely in the background. Sid's sister Meera mostly serves his story, and the other girls are stereotypically mean, constantly mocking Leila in Chinese; Leila's last interaction with them is telling them to "speak f*cking English." In light of an Asian writer walking away from the show, it's hard not to view all of this as an egregious failing.

Ultimately, Grand Army takes a more sensitive approach to these subjects than Netflix's other polarizing teen series 13 Reasons Why, which positioned lead character Clay as a white savior and tackled a variety of hot button issues with the gentleness of a sledgehammer. But the discourse around the writers room is a reminder that the people behind the scenes matter just as much as the onscreen representation, and that impact is more important than well-meaning intent. As Dom herself says, "We need someone to hear us. It matters who hears you and says 'I understand.' It just matters."