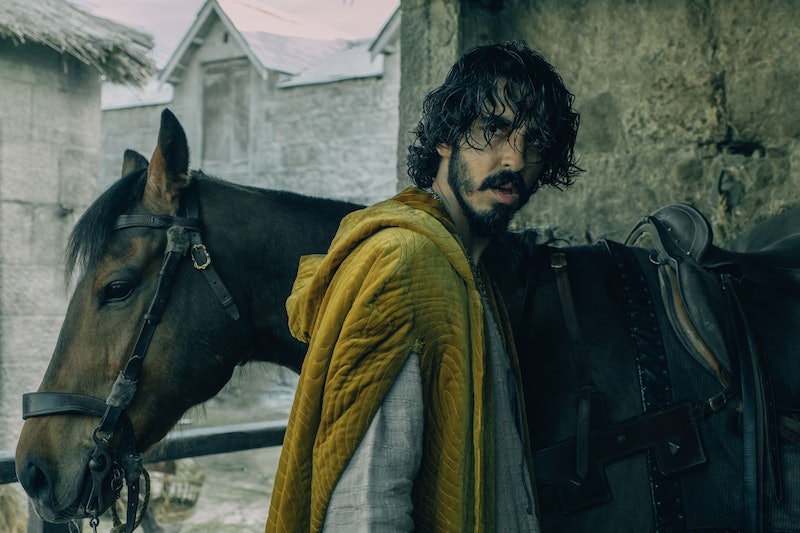 Director David Lowery’s film takes a lot of liberties with its source material, the 14th century prose poem Sir Gawain and the Green Knight. As its title suggests, the story follows a courageous young knight (Sir Gawain), who is challenged to an unconventional game by a stranger glad in head-to-toe green (the Green Knight). First published by an anonymous writer, the story was first translated into modern English in 1925 by J. R. R. Tolkien, and has since become a seminal text for academics and students studying Medieval literature.

But in this new version, much of the original material is flipped on its head. Characters are linked (Alicia Vikander and Sarita Choudhury each take on multiple roles), and their personalities are subverted: Rather than a steadfast and lionhearted knight, Dev Patel plays Gawain as an insecure yet ambitious young man dreaming of knighthood. This Green Knight feels closer to a coming-of-age story than an epic legend of the Round Table, and it’s this clever reversal that gives the film its modern resonance, despite its 14th-century setting.

When Gawain accepts the Green Knight’s challenge at the beginning of the movie, hoping to prove himself to the feeble King Arthur (Sean Harris), the stakes of the wager seem colossal: He is invited to strike the Green Knight, on the condition that he travel to the mysterious Green Chapel in a year to receive the same blow. Gawain is perplexed by the “game,” only to be reminded by the King that it’s only that — a game. So he steps forward, and decapitates the Green Knight with a single swing. But instead of falling to his death, the curious horseman picks up his own head and tells Gawain to meet him “one year hence.”

The year passes with Gawain behaving even more immaturely than he already had, spending most nights with Esel (Vikander) or getting into drunken quarrels at the pub. Still, at the end of his year of rest and relaxation, he musters the courage to leave for the Green Chapel, wearing an enchanted sash his mother (Choudhury) has made to protect him from harm. Along the way he loses his possessions — including that magic sash — to a gang of scavengers, fetches the head of a ghost who lost their head to the Green Knight, hallucinates on poisonous mushrooms, encounters a group of giants, and is eventually given shelter by an unnamed Lord (Joel Edgerton) and Lady (also Vikander). The latter slips him another sash, which Gawain wears when he finally makes it to the Green Chapel.

Our young hero proceeds to prostrate himself before the Green Knight in the fabled chapel, and almost manages to complete his side of the bargain. But he keeps his sash on, clearly hoping its magic will help him survive a beheading — and still ends up flinching and running away, just as the Green Knight is about to strike. He returns home as a false champion and inherits the throne from King Arthur, wearing the sash all the while. For the rest of his life, Gawain makes more cowardly decisions (read: abandoning Esel and keeping her from their baby, after she has his child out of wedlock) and wallows in his guilt for his failure at the Green Chapel. It’s not until an apparent insurrection at his castle, decades later, that he finally removes the sash — causing his head to detach from his neck, and roll to the floor like an apple falling from a tree.

Except that’s not what really happens.

This 15-minute flash-forward was just a ruse — a glimpse of Gawain’s future, should he choose to live as a coward rather than die a hero. But that’s not the narrative he wants for himself. When thrust back into reality, Gawain chooses to remove his sash and meet his fate with bravery. It’s then that Gawain learns the “game” was merely a test of courage — as King Arthur forewarned. The Green Knight withdraws his sword, and applauds Gawain for his bravery before facetiously running his finger across Gawain’s neck. “Now off with your head,” he jokes with a smile. And cue the credits.

Sir Gawain and the Green Knight is famously enigmatic. Each new translation and theoretical school has offered its own take on the poem’s meaning, but ultimately, experts agree that there isn’t one definitive answer; there are multiple valid interpretations.

Even after centuries of Gawain discourse, though, Lowery’s adaptation managed to find a fresh angle. Before his film, there had yet to be a version of Sir Gawain that centered on its protagonist’s flaws. Throughout his journey, Lowery’s Gawain flounders through each task like a bull in a china shop, just barely overcoming each hurdle. Even carnal temptations get the best of him. (When the Lady attempts to seduce him, Gawain refutes her advances, but not without some indulgence: he orgasms on her hand, and she wipes his semen on the sash, mixing his shame with the symbol of his cowardice.)

The poem features a very different (and chaste) Gawain — and a very different ending. Its hero is a young legend and fierce fighter, who doesn’t hesitate to meet the Green Knight in the chapel. When he arrives, the Green Knight strikes Gawain’s neck, but only scratches the skin’s surface, thanks to the enchanted sash’s powers. The Green Knight then reveals himself to be the Lord who took in Sir Gawain, and they share a good laugh. When he returns home, Gawain is further lionized as a superstar of the Round Table.

In The Green Knight, we don’t get to learn what happens after the events in the Green Chapel. Gawain doesn’t even feel like a fully-realized individual yet, even if he’s getting closer to maturity — he’s still young, after all. So where does that leave Gawain’s fate?

We don’t know. He’s still figuring it out.