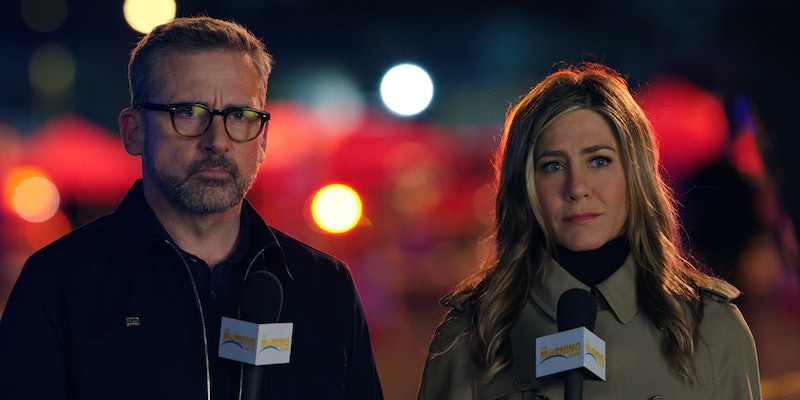 Loyalty is the weapon of choice in the penultimate episode of The Morning Show's first season. With disgraced news anchor Mitch (Steve Carrell) poised to take down the network, his former colleagues manically scramble to preserve their footing and corral new allies all while trying to maintain an outward allusion of calm. Unable to plainly state what they want and why they want it, the characters invoke "loyalty" as a moral crutch for justifying self-serving behavior and "disloyalty" as a threat to be lobbed at the insubordinate. But the more they attack and parry, the less the word begins to mean.

If you were to try and plot every instance loyalty is invoked in the Dec. 13 episode, the graph would come out looking something like a spider's web — everyone connected, everyone stuck. At the top of the episode, it's Alex (Jennifer Aniston) who's upset with Bradley (Reese Witherspoon) for meeting with Mitch behind her back. But Bradley assures her that she would never pursue an interview with Mitch if it wouldn't benefit their show — which is actually quite loyal, if not outright self-sacrificial. Surrounding them are battles between Alex and Mitch, Alex and producer Chip (Mark Duplass), and Mitch and guest booker Hannah (Gugu Mbatha-Raw), as well as Hannah and assistant Claire (Bel Powley) and media reporter Maggie (Marcia Gay Harden) and network exec Corey (Billy Crudup). Taken together, these dust-ups are a study in what loyalty ultimately asks of us: blind faith in another person, unblinking allegiance to what another person thinks is right, or thornier yet, doing what you believe is right for a person even in the face of disagreement.

That last interpretation is what drives Hannah to rat out Claire's romance with on-air personality Yanko to human resources. Hannah believes she's taken a proactive step to safeguard her friend's career and reputation, but from Claire's point of view, Hannah has sabotaged her without warning. Of all the hour's conversations on the subject, their disagreement is the most earnest and perhaps more distressing for it. Even when people act in the absence of self-interest, loyalty proves slippery.

It's when characters in power exploit that confusion that the show seems to condemn the concept most explicitly. Chip was Alex's producer before he was The Morning Show's producer; they're close. So when he learns she's meeting with his potential replacement, he calls her, creating a space for her to confess. By this point, viewers know Alex well enough to know that she won't, but Chip holds the line in excruciating silence hoping years of friendship will compel her.

That is, of course, the same expectation she's relying on when she pleads with Mitch to cancel his interview. Instead he assures her that nothing he says about his sexual misconduct will implicate her, but she still won't back down. Just like with Bradley, the only version of loyalty Alex accepts is 100% compliance — or else. In a Hail Mary to keep Mitch quiet, she threatens to make up a story about how he took advantage of her, too. For Alex, loyalty is a closed circle of one.

Odd as it sounds, it's from Mitch that we see a version of loyalty emerge that's measurable and reciprocal. He sincerely believes that Hannah used their affair to leapfrog her career. Now, she owes him. Ignoring for a moment that his version of what happened between them is false, his is the most straightforward, transactional view of what we owe each other. For Mitch, loyalty is a constant re-zeroing of the scoreboard. It's the same version that plays out between Maggie and UBA president Fred, who we learn fed her the scoop that launched her career. Now that she's investigating his ouster, she's tipping him off, too. A back-scratch for a back-scratch.

Bustle's Rebecca Patton recently wrote about how adopting the nomenclature of "family" at work produces a toxic dynamic, importing fraught structures and jerry-rigging them to fit the situation at hand. The way the characters of The Morning Show bombard each other with appeals to loyalty feels symptomatic of an environment where it's anathema to admit you want something just because it's what's best for you. Behavior needs to be rationalized through the prism of a higher purpose — the most common of which is to protect the show. But when that isn't a convenient excuse, loyalty — vague but virtuous — is a socially acceptable justification for manipulating someone to serve your own self-interests. At its worst, it's a bludgeon for those who stand in your way.