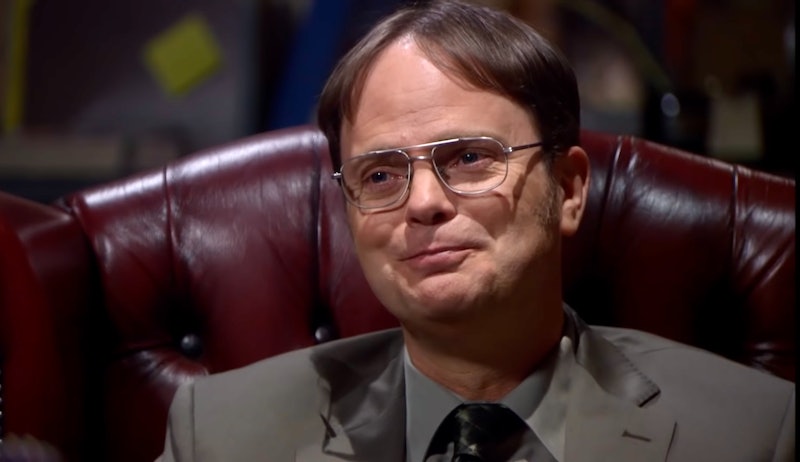 For those still mourning Michael Scott and co. leaving Netflix, Peacock unveiled a never-before-seen cold open from The Office on Friday, Jan. 1 to celebrate the NBC comedy's arrival on its new streaming home. "This is not a drill," read a Peacock Instagram post, presenting nearly 5 minutes of unused footage from The Office's 2013 series finale. In the funny Matrix-themed clip, Rainn Wilson's Dwight Schrute is the target of one of Jim (John Krasinski) and Pam's (Jenna Fischer) elaborate workplace pranks.

The deleted cold open's release fulfills a promise Peacock made when news broke that The Office's 201 episodes would no longer be available to stream on Netflix beginning in 2021. In late July, Peacock Chairman Matt Strauss told Bloomberg that NBCUniversal's platform would be "reintroducing The Office in a more complete way" by "incorporating elements that were not part of the original broadcast." (The first two seasons of The Office are now streaming for free on Peacock, with Seasons 3-9 available to Premium subscribers, per Deadline.)

Fans will surely enjoy the newly released footage. True to form, the cold open features hijinks that don't quite go to plan. To convince Dwight that he's somehow really in The Matrix, Jim and Pam get Hank the security guard (Hugh Dane) to introduce himself as Morpheus' fictional brother, Dorpheus, and present Dwight with the all-important blue pill or red pill decision. However, his reaction surprises them.

It's a sweet moment as Dwight explains that he has no interest in joining Dorpheus' underground army to wage war for the freedom of all humankind. The reason? As much as he hates machines, he's happy with his life. Things were going pretty well for Dwight by the series' end.

"The timing is terrible right now," Wilson's character explains, as Jim and Pam watch the warehouse exchange on a monitor in another room. "They just promoted me to manager, plus I own this building, I run a very substantial farm, and I'm getting married soon to a woman I love. ... I don't want to lose it."

Even more emotional is the clip's end, which is a tribute to Dane, who died in May 2018. The footage is definitely worth watching, and it may serve as a balm to Office fans still disappointed by the show's move between streaming platforms. NBCUniversal is hoping beloved content like the long-running sitcom will help lure in subscribers, and previously unseen footage seems like a great carrot to dangle.

"Having The Office back in the NBC family opens up access to a lot of extra content that we originally shot," executive producer Greg Daniels said in a statement via CNN. "The team at Peacock wanted to create the ultimate destination for fans, so I went back into the dailies with the original editors of the show and found some never-before-seen footage that was cut for time but is still fun to see."

More like this
Netflix Reveals First Look At Wednesday In The 'Addams Family' Spinoff Series
By Bustle Editors
A New 'And Just Like That' Table Read Pic Confirms A Key Character's Return
By Jack Irvin and Grace Wehniainen
Alleged Cult Leader Larry Ray Is Awaiting Sentencing Following His Conviction
By Brad Witter
Nicola Coughlan Shared A Lady Whistledown Excerpt From ‘Bridgerton’ Season 3
By Grace Wehniainen, Alyssa Lapid and Sam Ramsden
Get Even More From Bustle — Sign Up For The Newsletter