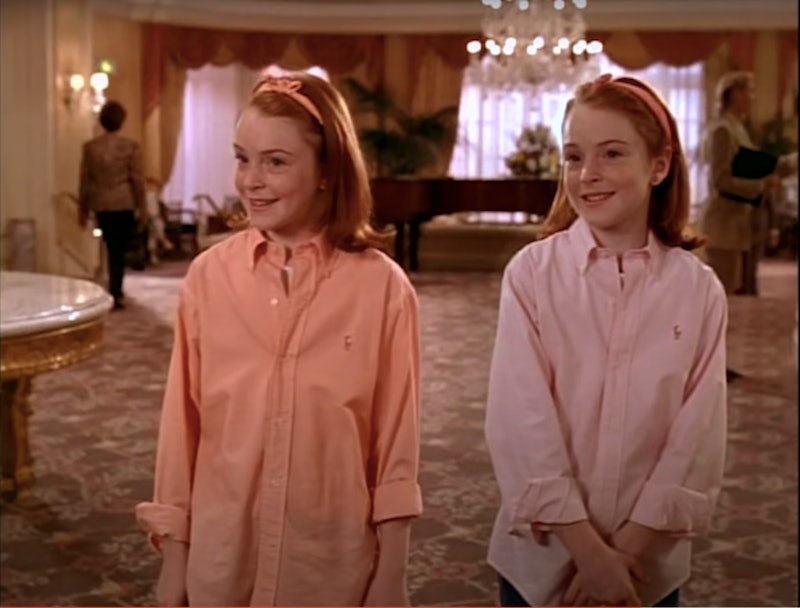 Get your Oreos and peanut butter ready. On Monday, The Parent Trap cast will reunite for a conversation moderated by Katie Couric, all as part of a fundraiser for non-profit organization World Central Kitchen. The reunion, which will feature stars Lindsay Lohan, Dennis Quaid, Elaine Hendrix, Lisa Ann Walter, and Simon Kunz, as well as director Nancy Meyers, will be the first time the cast and crew have come together for an event since the film's release on July 20, 1998.

On Sunday, Couric announced the Parent Trap reunion on Instagram, writing "Boy, do @nmeyers and I have a treat for you! We got the cast of the Parent Trap together again for the first time since 1998." The cast and crew will open up about being on set, the most iconic moments from the film, and the enduring legacy of the movie. In addition, cast members will pay tribute to star Natasha Richardson, who played Elizabeth in the film. Richardson died unexpectedly in a skiing accident in 2009.

The Parent Trap, a remake of the 1961 classic with the same title, starred Lohan as twins, Annie and Hallie, who were separated at birth by their two divorced parents, Nick and Elizabeth, who moved to different sides of the globe. After running into each other by chance at a summer camp (they both liked their Oreos with peanut butter, so of course, have to be blood relatives) the twins decide to switch lives for a few months. American-born Hallie jets off to live in England, while British Annie moves in with her father stateside. Ultimately, the two siblings reunite and bring their parents back together as well.

Meyers and Couric came up with the idea of a Parent Trap reunion during a live chat in April, during which Lohan commented as the two discussed the film, as per People. It's clear the whole cast and crew are excited for the reunion. On Saturday, Meyers shared a photo from the Parent Trap set, writing, "Yayyyy! Finally, I can share my PARENT TRAP news with you tomorrow! (Still not a sequel. )" Lohan also teased the reunion on Instagram, writing, "@nmeyers can't wait!" Lohan posted the trailer for the event on Instagram as well, writing, "Let’s get together. Monday, July 20th on @katiecouric Instagram."

The Parent Trap reunion will occur on the film's 22nd anniversary and will be in support of Chef Jose Andres' organization World Central Kitchen, which delivers fresh and healthy meals to those most in need. Many beloved casts and crews have taken the chance to reunite during lockdown orders caused by the spread of COVID-19, including The Office, Community, My So-Called Life, and The Goonies. Now, Couric will bring together another beloved movie''s cast or crew, and fans will have to tune out to hear their take on the iconic film.

More like this
Lewis Hamilton Turned Down A Role In 'Top Gun: Maverick' For This Surprising Reason
By Darshita Goyal
Ezra Miller Has Been Arrested Again
By Sophie McEvoy
Madonna’s Reason For Directing Her Own Biopic Is So Madonna
By Maxine Harrison
Jennifer Coolidge Got A Lot Of “Action” Thanks To 'American Pie'
By Catharina Cheung
Get Even More From Bustle — Sign Up For The Newsletter