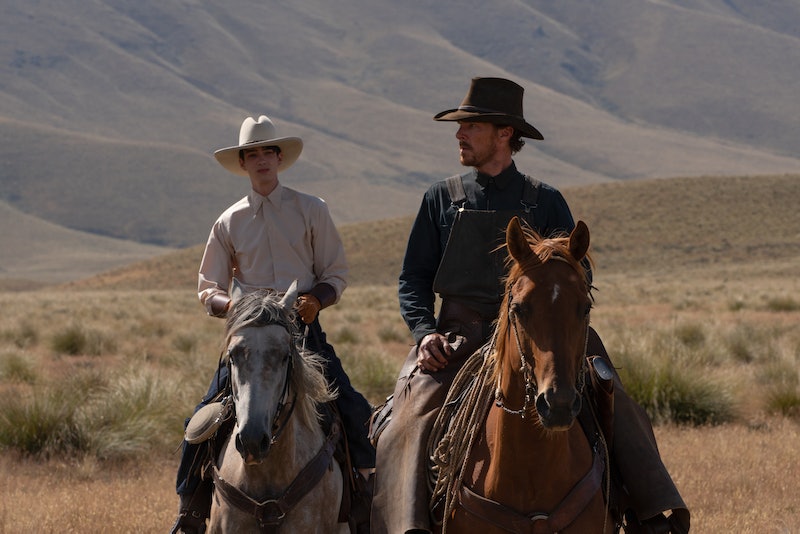 For those who’ve seen Jane Campion’s latest film The Power of the Dog, you may be wondering if you missed something important. Don’t fret if you did: The clues were all there, but they were pretty subtle. (Warning: major spoilers ahead).

A quasi-Western based on Thomas Savage’s 1967 novel of the same name, the story focuses on two brothers, Phil (Benedict Cumberbatch) and George (Jesse Plemons), who own a Montana ranch in the mid-1920s. The two men grow apart when George marries Rose (Kirsten Dunst), who has a queer-coded son, Peter (Kodi Smit-McPhee), from a previous marriage. From the jump, Phil ruthlessly ridicules both Rose and Peter. However, it’s soon revealed to the audience that Phil has become this cruel in part because of how he’s been forced to hide his own sexuality — and the true nature of his relationship with his late mentor, Bronco Henry.

Later on, Phil decides to change his tune toward Peter, and takes him under his wing, teaching him the basics of ranch work. It seems like their friendship might even turn into something more. But then, Phil dies suddenly from an anthrax infection.

It’s not immediately clear how this happens, and even Smit-McPhee was puzzled. He told the Los Angeles Times that when he finished reading the script, he had to review the previous few pages to make sure he hadn’t missed something — and confirmed that he “didn’t miss anything.”

Below, exactly what happens at the end of The Power of the Dog, and why you likely didn’t see it coming.

If you follow Peter’s actions closely, you’ll see how they lead to Phil’s death.

In the scene where Peter comes across a dead cow, it’s insinuated that an anthrax infection was the cause of death. That’s why he puts on gloves when he cuts into the animal.

Later, Rose gives Phil’s rawhides away to local traders, and Phil is left unable to finish the rope he’d been making for Peter. That’s when Peter — spying the open wound on Phil’s hand — gives him the contaminated hide, neglecting to mention that it’s dangerous. When Phil washes the hide, he contracts the anthrax infection.

Smit-McPhee explained what Peter was thinking in an interview with the LA Times. “Cutting the anthrax out of the cow, much like killing the rabbit in his room, is partly fulfilling his ambition toward becoming a doctor,” he said. “But Peter is an improviser. He goes with the flow. And when he sees that Phil has nicked his hand, that gives him the idea to contaminate the rawhide and infect him.

It’s insinuated that Peter planned to give Phil the diseased rawhide.

At the end, Peter isn’t just smiling because his mother seems to be in good spirits. It’s heavily implied that he’s reveling in the success of his plan to infect the Burbank brother.

Remember in the beginning of the film, when Peter vows to protect his mother? Well, this is how he did it. While this may be surprising, seeing as Peter and Phil mended their relationship, it’s clear Peter’s allegiance is with his mother. Hell hath no fury like a woman’s son scorned. As Smit-McPhee told the LA Times, “Even though for Peter this might possibly his first interaction with intimacy or love for another person, he’s willing to sacrifice that for his mother.”

More like this
Where Is Dr. Cline Now?
By Morgan Leigh Davies
Why The '365 Days' Sex Scenes Are Good, Even If The Movies Aren’t
By Arya Roshanian
What’s New On Netflix: The Return Of 'Bling Empire' & A Rebel Wilson Comedy
By Arya Roshanian
Watch The Dramatic First Trailer For Netflix's Jennifer Lopez Documentary
By Alyssa Lapid
Get Even More From Bustle — Sign Up For The Newsletter