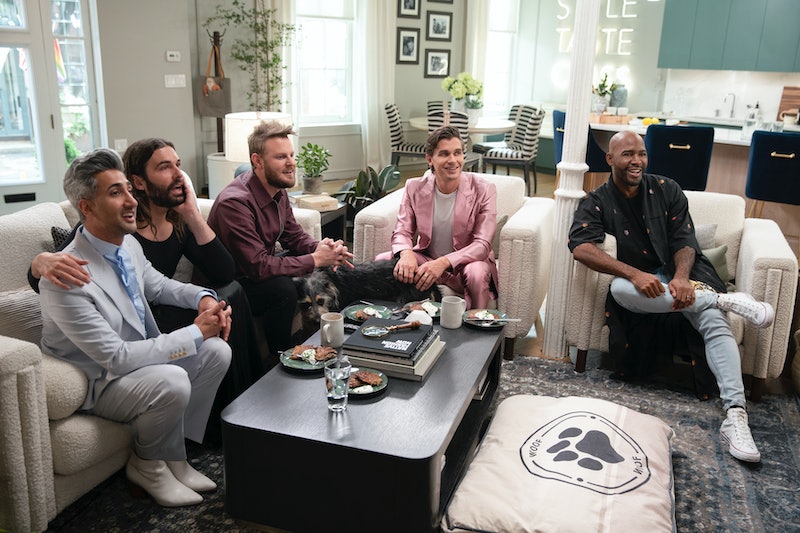 Queer Eye is back for Season 5, introducing a new city, new heroes, and a new Fab Five mascot: Walter, the Queer Eye dog. A lovable mutt who belongs to one of the producers, Walter fills the spot left behind by Bruley, the cute Frenchie from prior seasons who sadly died last year.

We see Walter pop up at the Fab Five's Philadelphia apartment throughout the season, and Queer Eye formally introduces him at the end of Episode 1. "He is part Catahoula Leopard dog, Labrador Retriever, Shih Tzu, Chihuahua, American Pit Bull Terrier, Australian Cattle Dog, and American Bulldog," Antoni and Bobby explain. "And most importantly, he's 100% lovable."

Walter is the family dog of producer Jordana Ives and editor Tony Zajkowski. They adopted Walter in November 2016 from the Bideawee animal shelter in New York City. "Trump who?! Finally figured out how to stop obsessing about the end of the world. This is Walter," Ives posted.

Walter's adventures are documented on his own Instagram, and with over 29,000 followers, he's quite the popular pup. "Sad-eyed rescue mutt living it up in New York City & the Catskills," reads his bio. "Expert napper, limited trick doer, amateur frog hunter, all around best friend."

Walter enjoys going to PetCon and Pride festivals, as well as lounging with the family and occasionally destroying dog beds and coffee table books. His birthday was on April 4, and according to his Instagram, he's now four years old.

"Everybody loves Walter," Jonathan Van Ness announced in a video. Walter has been hanging out with the Fab Five since as early as 2018, and was even there when Queer Eye won three Emmys. But though Walter's presence is a welcome one, the Queer Eye team also paid their respects to Bruley at the end of Episode 1. "You made us laugh. You brought us love. We'll always remember you," the final in memoriam reads.

Bruley was owned by series producer Michelle Silva, and he died after having a heart attack in October 2019 at the age of 10. "My whole heart. My love bug. My best friend. My constant. My soul mate. My everything," Silva posted on Oct. 3. "I brought him home when he was 9 weeks old on a rainy day in New York City. Ten years later on a rainy day in LA, he passed away in my arms."

Bruley may be gone, but Walter looks like he's up to the task of being the cheerful presence that welcomes the Fab Five home at the end of the day.