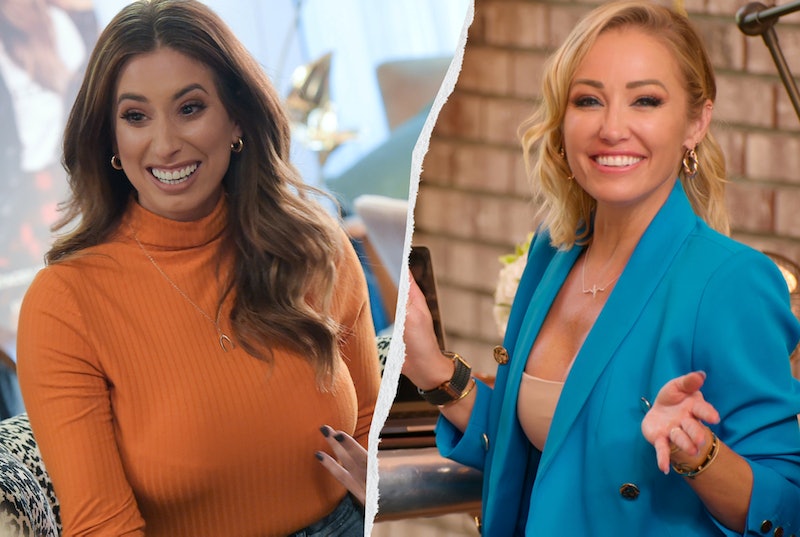 Selling Sunset and The Oppenheim Group’s glamorous team of estate agents returned for season 4 on Netflix on Nov.24, and given all drama in this series, it’s a surprise they had time to sell any of the incredible multi-million dollar Los Angeles homes on their books. To test their famous Oppenheim selling pitch, Selling Sunset’s Mary Fitzgerald, Davina Potratz, and Maya Vander were recently asked to try “selling” some of the UK’s most iconic and celebrity homes (although, do note, none of them come with an infinity pool...).

All the way from LA, the Selling Sunset crew took to celebrity engagement platform Cameo to share their, surprisingly nice, opinions about Stacey Solomon’s newly renovated Pickle Cottage as well the Downtown Abbey Highclere Castle, and the Gogglebox stars’ homes. While the cast is used to LA homes that benefit from year-round sunny weather, they appeared to appreciate that British digs have their own quintessential UK charm (and, in my own experience, a guaranteed assortment of various mugs).

In a short video clip, which you can watch on the Cameo platform, Mary Fitzgerald was full of praise for Stacey Solomon’s newly renovated Pickle Cottage where she lives with partner Joe Swash, calling it “so cute” adding that she has “major reno talent.” Fitzgerald, who is one of the top-ranking agents at the Oppenheim Group, particularly likes the nursery, which TV Presenter Stacey spent hours working on before the arrival of baby Rose earlier this year.

Mary comments, “The flowers on the wall I am obsessed with.” Hinting at her and husband Romain’s future plans, she says, “I might have to copy you when Romain and I have a little one.”

However, the kitchen is the only room Mary isn’t so keen on, explaining she “isn’t a huge fan of the bright blue…but it’s all about personal preference”.

Meanwhile, Maya Vander was all smiles when she reviewed the iconic Yorkshire country estate Highclere Castle, the centre of the hit series Downton Abbey. In Vander’s professional-esque pitch, she explained that the country estate was “built in 1679…” and “has amazing, beautiful gardens” explaining that “it’s one of those special properties that don’t often come on the market”. Her negotiation tips for her ‘seller’ include a suggestion for “a few staff members to come with the property.”

One of Selling Sunset’s more divisive characters, “sharp-tongued” Davina Potratz (yes, the one with the 75 million dollar listing) was very sweet about Gogglebox star’s homes. She deemed Blackpool’s Sophie and Pete’s stone feature wall “very classy”, while she really loved the “tasteful” and “elegant” design features in Stephen and Daniel’s stylish home.

If you’re a hardcore Selling Sunset fan (guilty), you may be wondering why the cast was reviewing British homes in the first place. Well, Mary, Maya and Davina as well as Amanza, Heather and Roman are all selling personalised videos on Cameo — costing £111, £71 and £110. Not quite a Hollywood listing, but, I’ll take it.